Jordan Walden gets first save, Angels to make changes. Halolinks

Share All sharing options for: Jordan Walden gets first save, Angels to make changes.  Halolinks

Kazmir bests Rays in return to the Trop - angelsbaseball.com
Kazmir allowed one run in five innings and beat his former club for the first time in three tries, leading the Angels (73-76) to a 6-3 win over the Rays (89-59) before 25,794 in his first trip back to the stadium he called home for the first 5 1/2 seasons of his career. "I've already faced these guys three times, so it's nothing new anymore. But being at Tropicana Field, it was a little bit different," Kazmir said. "It was just weird, coming out of the dugout from the other side and going up against guys that you've known close to your whole career. But it was a good win for all of us." Manager Mike Scioscia said before the game he filled out his lineup with offense in mind, hoping to give Kazmir plenty of support, and the plan worked. Abreu hit two solo home runs to right field in the first and seventh innings, respectively, for the 15th multi-homer game of his career. His two long balls Sunday also put him at 20 on the year, giving him nine 20-homer, 20-steal seasons -- the third most in Major League history and the most among active players.

This was the type of game Angels fans were expecting all year -- decent pitching, "batter's box offense", and solid defense -- instead of the uninspiring play that was frequently displayed throughout the season. One thing that was kind of funny was Scioscia's comment about putting an offensive lineup on the field, and then having the bottom third of the batting order feature three players with batting averages below .200. I get why it's like that, but still, how intentionally un-offensive could the lineup have been if Scioscia was going for that look? The only offensive downgrade could have been Willits for Hunter. Anyway, glad to see Angels win a series against a good team. Here's some 'lights: Abreu opens the scoring with a solo shot - Bobby Abreu takes Jeff Niemann deep in the top of the first, staking the Angels to a 1-0 lead,Abreu delivers his second blast of the game - Bobby Abreu belts his second dinger of the day, a solo shot to right field in the top of the seventh,Bourjos cranks a three-run dinger to left - Peter Bourjos gives the Angels a 4-1 advantage in the top of the fourth with a shot to left, Rivera tags Crawford to end the game - Juan Rivera gets the tag on Carl Crawford at first base to end the Angels' 6-3 win over the Rays (watch for Walden to make sure he gets the ball from his first career save), Hunter flips over the wall in foul ground - Torii Hunter flips over the wall in foul territory after Ben Zobrist's fly ball goes off his glove for a ground-rule double (the security guard in this video looks like this type of thing happens all the time. Dude, it's Torii Hunter. Yeah TORII HUNTER!). Kazmir earns the win against the Rays - Scott Kazmir strikes out four over five innings of work and earns the win against the Rays.

Rangers-Angels Preview - FOX Sports on MSN
The Rangers' chances of bouncing back don't appear strong against Weaver (12-11, 2.96 ERA), who has a major league-best 1.56 ERA at home this season. The right-hander, though, is 3-3 in his past 10 starts there despite a 1.23 ERA, and he's received no more than three runs of support per outing. Weaver appears to have a better chance to collect a victory with the Rangers arriving. He's 5-0 with a 2.40 ERA in nine career home starts against Texas, and has won four consecutive matchups there including two this season. The Angels will try to keep rolling against Derek Holland (3-3, 4.12), who has struggled on the road throughout his brief career but was impressive in his previous outing there. Holland is 2-2 with a 4.44 ERA in four career starts against the Angels, and earned a 4-3 win on May 17 at home by allowing three runs over 5 1-3 innings. Los Angeles has won four of six at home over its AL West rivals, but trails the season series 7-5.

Too bad this game doesn't have as much playoff implications as it should.

Angels' Reagins: There will be changes this off-season - The Orange County Register
"There will be some changes. The extent of those changes and how those changes manifest themselves remains to be seen." Reagins' options could be limited, however, by the Angels' financial commitments for 2011. With their mid-season acquisition of right-hander Dan Haren, the Angels have nine players under contract for next season at a total salary of approximately $81 million. Another 10 players will be eligible for salary arbitration and pay raises that are likely to be significant. Add in the $11 million the Angels still owe Gary Matthews Jr., and Angels owner Arte Moreno is looking at more than $120 million in salary obligations before any changes are made to the roster. That would be a franchise record.

With the payroll already at $120M, the Angels off-season may be pretty boring, at least as far as free agent signings. It's good to see Reagins has gained a firm grasp of the "GM non-speak". You know, the words are there, but they just don't say anything.

Yu Darvish could be headed to MLB this offseason - HardballTalk
FOXSports.com's Ken Rosenthal heard from a source Saturday that right-hander Yu Darvish is likely to be "posted" this winter, meaning teams in Major League Baseball will have a crack at luring him away from the Nippon Ham Fighters.

I just recently found out the name of this team isn't the Nippon "Ham Fighters" as in, a team intent on doing some serious harm to pigs, but rather the Nippon Ham "Fighters". Nippon Ham is the sponsor of the team. I like my version better. 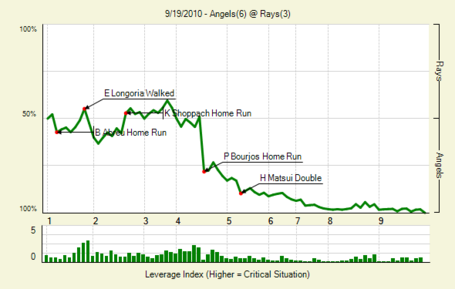 Colvin in hospital after bat punctures chest - MLB.com: News
Cubs outfielder Tyler Colvin is not expected to play again this season. He'll spend at least the next several days at Jackson Memorial Hospital's Ryder Trauma Center undergoing testing while doctors seek to prevent him from having a collapsed lung.

San Francisco Giants overtake San Diego Padres for first place in NL West - FOX Sports on MSN
Guillen hit a grand slam and drove in six runs, Barry Zito won for the first time in two months and the San Francisco Giants regained first place in the NL West with a 9-2 win over the Milwaukee Brewers on Sunday. After a loss Saturday to fall behind San Diego in the West, the Giants moved a half-game up on the Padres, who lost to St. Louis 4-1.

Come on Padres! (this is a link)

Peter O'Malley says Frank McCourt needs to sell the Dodgers - latimes.com
"For many years, the Dodgers have been one of the most prestigious institutions in our city and throughout professional sports," O'Malley said. "Sadly, that is not the case today."

Hey Pete, you know why the Dodgers are no longer one the most prestigious institutions in your city? Two words: Arte Moreno.

September 20 - BR Bullpen
Events, births and deaths that occurred on September 20.
1927 - Babe Ruth of the New York Yankees hits his 60th home run of the season, breaking the record he set in 1921.
1968 - Mickey Mantle of the New York Yankees hits the 536th and final home run of his major league career, a solo shot against Jim Lonborg of the Boston Red Sox in a 4 - 3 loss at Yankee Stadium.
1998 - Cal Ripken, Jr. takes himself out of the starting lineup and does not play in the Baltimore Orioles' loss to the New York Yankees, ending his consecutive games played streak at 2,632. After nearly 16 years, Ripken says he decided the time was right to end the streak, which began on May 30, 1982.
Happy b-day:
1954 - Mickey Klutts, infielder Something about an athlete named "Klutts" that just doesn't work.

Didn't the Angels trade for a third baseman?: