Holland struggles in Rangers' 7-4 loss to Angels - Dallas Morning News
Derek Holland walked off the field screaming at himself Monday after Julio Borbon saved a grand slam hit by legit major league threat Juan Rivera. One can only imagine what he must have said to himself by not being able to retire the worst hitter in all of baseball. Twice. It was those two matchups against Brandon Wood, who entered the game hitting .157, that summed up why the Rangers’ lost 7-4 to Los Angeles, failed to reduce their Magic Number any further and why Holland isn’t likely to have a role in the postseason. Wood began the day with both the worst batting average and the worst on-base percentage (.184) of the 331 players to have at least 200 plate appearances in the majors this season. No player with at least 200 plate appearances has had worse numbers in the last 35 years. Yet, it was Wood who put the Rangers in the hole and put Holland’s postseason spot in serious jeopardy.

Hey! Lay-off Brandon Wood! He may be the worst hitter in baseball this season, but he's OUR worst hitter and we're not going to allow some Texas turd sportswriter to talk trash about him. With the season-ending injury to Erick Aybar, Wood should see plenty of playing time the rest of the year. Heck, just this last series against Tampa, Wood had a modest 2-game hit streak! (he's raised his average 4 points since the Aybar injury). Anyway, here's our boy doing some damage: Wood knocks in the Angels' first run - Brandon Wood smacks a single to center to score Mike Napoli, giving the Angels a 1-0 lead in the second (boo-yah!), and if that's not enough, how about this bit of wackiness...Mathis knocks in Wood with a double - Jeff Mathis smacks a double to center to plate Brandon Wood (see that, he can score runs too!), giving the Halos a 2-1 lead in the fourth, Borbon makes an amazing grab in the third - Julio Borbon takes a grand slam away from Juan Rivera with a great leaping grab at the wall for the final out of the third...[YAWN] Been there, seen that.

Rangers-Angels Preview - MLB News - FOX Sports on MSN
Texas has failed to come up with clutch hits on this trip, leaving 35 men on base and batting .200 (7 for 35) with runners in scoring position. Scoring opportunities against Santana could be limited. The right-hander allowed two runs and four hits in eight innings against Detroit on Thursday, but didn't get much offensive help in a 3-2, 11-inning loss. He had compiled a 3.00 ERA while winning his previous three starts, and needs one more victory to surpass his personal best set in 2006 and matched in '08. The Rangers counter with Colby Lewis (11-12, 3.84), who has won back-to-back starts after losing his previous seven decisions.

Not only do the Rangers covet Angel players and strive to play Angels baseball, now they're copying the Angels hitting abilities with men on base. When will this madness stop?

Jered Weaver delivers for Angels in 7-4 win over Texas - latimes.com
Weaver delivered another quality start, giving up three runs and nine hits, eight of them singles, in 62/3 innings of Monday night's 7-4 win over Texas in Angel Stadium.The right-hander wasn't dominant — he struck out only two — but he improved to 13-11 with a 2.99 earned-run average and lowered the rotation's ERA to 4.10, fifth-best in the American League. Also...Scioscia said shortstop Erick Aybar will sit out the rest of the season because of a suspected sports hernia.

Weaver didn't dominate, but he won.

12 who could be Angels in 2011 - The Orange County Register
Predicting which free agents will be heading to Anaheim won't be easy, but these guys should be on the wish list.

Dan Woinke from the Wegister takes an early look at some players the Angels should be interested in this off-season. Most will be either too expensive, too old, or too crappy, but hey, it's a list.

If I give you a map, will you get us out of here? I don't like this place called Out of the Race. 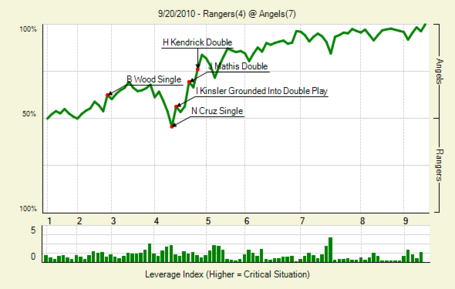 Selig rules out increased instant replay this year - CBSSports.com Baseball
Baseball commissioner Bud Selig ruled out increased use of instant replay by umpires to review close calls during the postseason this year. "I brought the subject up, as I always do with everybody," Selig said at Yankee Stadium on Monday night. "I don't get the feeling that there's a lot of support for it, at least their conversations with me." Selig said the key issue for him is the delays that video reviews cause. He said there is no support for increased use of replay on the committee -- or any clamor for it from baseball executives.

Man Charged in Wrigleyville Bomb Plot: FBI - NBC Chicago
A 22-year-old Lebanese medical student who regards Sept. 11 as a "beautiful day" is in custody after placing a backpack containing what he thought was an explosive device into a Wrigleyville trash can, federal authorities said Monday.

Talk cheap, Lackey's not;No excuses for free agent bust - FOX Sports on MSN
When you get right down to it, Lackey has done only two things well this season: roll his eyes when one of his teammates commits an error, and deliver postgame excuses that fall somewhere between hilarious and ludicrous. Most Red Sox fans understand things would have been different this season were it not for injuries to Dustin Pedroia, Kevin Youkilis, Jacoby Ellsbury and Mike Cameron. But the excuse-making with John Lackey is old and tired, and people aren't buying it. Let's just say what the Red Sox won't say: So far, Lackey has been a complete bust.

Looks like the honeymoon is over for Big John and the city on the river Charles.

This is funny because the broadcast wasn't going to show the idiot running around on the field until Diaz tripped him. Instead, they were showing Jason Werth standing at home plate watching what was going on in left field. It wasn't until seeing Werth's reaction did anyone get an idea something funny happened. Watch the video to see what I'm talking about.

Here's an exclusive Halos Heaven photo from the ceremony... 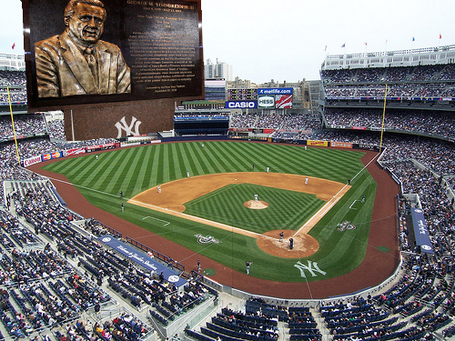 Jamie McCourt says couple discussed selling Los Angeles Dodgers if team didn't make money - ESPN Los Angeles
Despite being a family law attorney herself and indicating in court documents it was a childhood dream of hers to own a baseball team, Jamie McCourt testified she didn't read the marital agreement before signing it.

Where did this idiot go to law school, Vince's School of Lawn Care and Family Law?

Checking in with one of my favorite Angel sites. I like how this former player was willing to write a rather lengthy note.

Wanna see something freaky? Word is, no one died. (Tip via Deadspin)

September 21 - BR Bullpen
Events, births and deaths that occurred on September 21.
1892 - At Cleveland's League Park, John Clarkson of the Spiders beats the Pirates 3 - 2 to become the fifth pitcher in major league history to win 300 games. The 31-year old right-hander will compile a 328-178 record games during his 12-year Hall of Fame career in the big leagues. 328 wins! In twelve years!!
1982 - Playing against the Royals at Anaheim Stadium, outfielders Fred Lynn and Brian Downing crash through the LF fence while trying to catch a fly ball. Lynn makes the catch and it is ruled an out, the umpires reason that it is the same as if he had tumbled into the seats. California wins, 2 - 1, when Daryl Sconiers singles home the winner in the 9th.
2009 - For the second straight night, the Yankees fail to become the first major league team to clinch a playoff spot. After the Mariners yesterday, it's the Angels' turn to spoil the Yankee celebration, with a 5 - 2 win over New York, thanks to a strong performance by P Joe Saunders.
Happy b-day:
1972 - Scott Spiezio, infielder Sunday, October 26, 2002. Game 6, bottom of the 7th inning.

Mark Saxon Watch: It's been 14 days since Mark Saxon posted anything new at ESPN Los Angeles' Angels blog. Hope he is okay.