Santana shuts out Rangers, wins 17th - angelsbaseball.com
Ervin Santana delivered some old-school hardball on Tuesday night, and the reward was a career high in wins for a season. Tying the Rangers in knots, Santana outdueled Colby Lewis in the Angels' 2-0 decision in front of 41,707 at Angel Stadium. Santana's fifth career shutout and first of the season took two hours and 12 minutes to complete, calling to mind the good old days, before Santana was born in 1982, when the Angels played at a rapid pace. "Work quickly, throw strikes," Santana said with clarity and brevity when asked for the formula to his success.

Nice game by Voodoo, but kind of lost in the win was the Angels inability to do much against Colby Lewis. The Halo hitters struck out a total of 12 times and managed just 4 hits in last night's win. I guess I shouldn't complain, they did win. Here's a couple videos: Santana earns his career-high 17th victory - Ervin Santana strikes out eight over while earning his career-high 17th victory with his fifth career shutout, Conger leads off the second with a triple - Hank Conger leads off the second inning with his first career extra-base hit, and how dumb was this...Cruz tries unsuccessfully to bunt for a hit - Nelson Cruz tries unsuccessfully to bunt for a hit with a runner on in the top of the seventh inning. Cruz is second on the Rangers in slugging, he's the tying run, and he tries to bunt? Have fun with that in the playoffs.

Rangers-Angels Preview - FOX Sports on MSN
The Angels (75-76), meanwhile, have won six straight home games including the first two of this series. They haven't won seven in a row in Anaheim since Aug. 5-22, 2006. Looking to complete the sweep, Los Angeles will give the ball to Dan Haren (3-4, 3.12 ERA). The right-hander is 2-0 with a 1.59 ERA in his last five starts. He limited the Rays to three runs, three hits and three walks while striking out 10 in seven innings of a 4-3 victory at Tampa Bay on Friday. Texas will give the ball to C.J. Wilson (14-7, 3.21), who is 0-2 with a 6.61 ERA in three September starts after going 11-2 with a 2.52 ERA in his previous 17 outings. Wilson tossed his third complete game of the season in Friday's 2-1 loss at Seattle, giving up two runs and six hits. The Rangers backed him with a season-low three hits. Wilson is 1-1 with a 4.50 ERA in three starts against the Angels this season. If the Angels complete the sweep, they will raise their record to .500 for the first time since they were 62-62 on Aug. 21.

Even if the Angels don't make the playoffs, it'd still be nice to see them sweep the Rangers at home.

Kendry Morales' ankle was broken, but not his spirit - latimes.com
"I don't remember much," Morales said. "I remember jumping. I remember hitting the ground, and I remember looking at my foot and thinking it was broken."

Conger can't lose - The Orange County Register
In his four starts since being called up Sept. 6, the Angels have allowed just six earned runs in 34 innings – a catcher's ERA of 1.50. It's the second time Conger has been behind the plate for a shutout. "That's a small sample size," Scioscia said. "Hank has definitely showed us the ability to do things a catcher needs to do at a major-league level. Now, the challenge is to do that for a whole season, the next season and a career. That's where the litmus test is going to be. He's shown the tools, and when he's caught, he's caught very well." "Me and Conger were on the same page the whole game. We worked quickly and threw a lot of strikes," Santana said.

Once again, a member of the coaching staff uses the term "small sample size". Saberdorks rejoice. Seriously though, as mentioned before, Conger is getting praises from the Angle pitching staff about his game calling and that's impressive for a guy who Scioscia has said is still learning.

Callaspo Struggling with Angels - FanGraphs Baseball
This season, however, hasn’t been kind to Tony Reagins’s new investment. Callaspo has a .256/.298/.323 slash line with the Angels in his 209 plate appearances with the team, a mark reminiscent of his terrible first seasons with the Arizona Diamondbacks in 2006 and 2007. Callaspo’s power has all but disappeared, as he has only mustered two home runs and seven doubles with the Angels after putting up eight and 19 respectively with the Royals. Combine that with a drop in BABIP to .262, and the recipe is a disastrous line for Callaspo.

Callaspo's future may be as a super-sub, much like Maicer Izturis and before him, Chone Figgins. 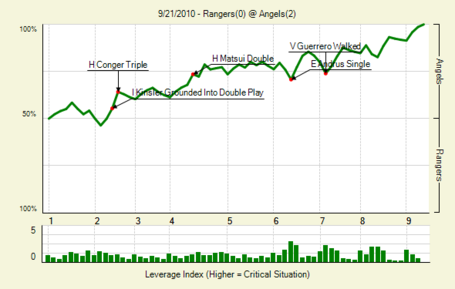 Twins score 4 in 8th to beat Indians - Yahoo! Sports
The thrilling, come-from-behind win coupled with the Chicago White Sox’s 7-2 loss in Oakland made the Twins the first team in the majors to clinch a division title this season.

Congratulation to the Twins organization.

The Padres are a game behind the Braves for the N.L. wild card.

Padres' David Eckstein has made 'little' go a long way - latimes.com
If David Eckstein is right, if players like him are an endangered species because computer-generated calculations can't quantify the value of hustling and the little things he does so well, baseball will be the poorer for it. If there's no room for someone like the San Diego Padres' second baseman, the ultimate little guy with a big heart and a winning influence on every team whose dirt-stained uniform he has worn, the sport will lose a piece of its soul."They want to see the numbers. They want to see stuff that translates on paper. I don't translate to paper."

"I don't translate to paper." What a great quote.

Colorado vs. Arizona - September 21, 2010
Saunders altered his approach from 10 days earlier to pitch an eight-inning gem, Kelly Johnson hit a two-run homer and the Arizona Diamondbacks dropped the Rockies farther back in the NL West with a 3-1 victory Tuesday night. Saunders changed his approach for the rematch, relying on his breaking balls to get ahead in the count early and set up his fastball. The switch was effective and the veteran left-hander held the Rockies to a run and six hits while striking out seven, dropping them 2 1/2 games behind San Francisco in the NL West. The main cog in the trade for Dan Haren with the Los Angeles Angels , Saunders has mostly struggled since the deadline deal. He's won just two of 10 starts with a 4.88 ERA and had given up seven runs - four earned - in each of his past two outings.

McCourt battle may be headed to mediation - Yahoo! Sports
In the trial that will decide ownership of the Los Angeles Dodgers, the lawyers for Frank and Jamie McCourt have agreed to re-enter discussions about a possible settlement, Yahoo! Sports has learned, an outcome that presumably would allow Frank McCourt to continue as owner of the club.Larry Silverstein of the law firm Bingham McCutchen testified Tuesday that after the agreement was signed and notarized he altered the contract in order to grant sole ownership of the Dodgers to Frank, based, he said, on the McCourts’ intentions. Also: Silverstein said he "corrected the mistake" of typographical errors made during the compiling of the multi-page MPA, leaving the Dodgers to Frank and the couple’s real estate holdings to Jamie.

Yankee Stadium parking stalls out after developer shows signs that it may default on bonds
The developer of the Yankee stadium parking system is on the verge of defaulting on $237 million in tax-exempt bonds issued by the city's Industrial Development Agency.

The Post-Season Express: Baseball Replays on Times Square Shuttle Trains - WNYC
Starting Tuesday, one of the three shuttle trains running between Grand Central Station and Times Square has what the MTA calls a subway first: an advertiser-sponsored video campaign. The ten-inch screens are promoting TBS's coverage of the baseball post-season.

From the press release: "TBS steps up to the plate on October 6th to begin televising the 2010 MLB Postseason. The network will provide exclusive coverage of all four MLB League Division Series (ALDS & NLDS) and the American League Championship Series (ALCS)." They even sent us photos: 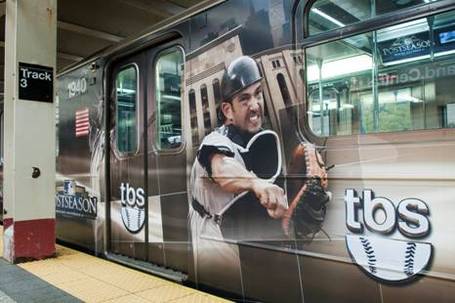 Still in this thing:

September 22 - BR Bullpen
Events, births and deaths that occurred on September 22.
1911 - Cy Young, at age 44, beats the Pittsburgh Pirates, 1 - 0, for his 511th and final major league victory.
1977 - Bert Blyleven tosses a 6 - 0 no-hitter for the Texas Rangers against the Angels at Anaheim Stadium.
1993 - Pitcher Nolan Ryan of the Texas Rangers faces just three Seattle batters before hurting his right elbow. Ryan finishes his career with 324 wins, 5,714 strikeouts and seven no-hitters.
Happy b-day (the "Doc" edition):
1870 - Doc Powers, catcher (d. 1909) From the baseball-ref page: Powers was injured on Opening Day, 1909, in the first ever Major League game played at Shibe Park. It was reported at the time that the pain began when he dove for a foul ball. The injury later turned gangrenous, and he died soon afterward. It was perhaps the first baseball death traceable directly to an on-field injury.
1875 - Doc Marshall, catcher (d. 1959)