Angels go long (again) but come up short  - The Orange County Register
Dan Haren and C.J. Wilson matched each other with three-hitters and just one mistake on each side leading to a run – and Haren's wasn't even his. An error by Kevin Frandsen opened the door for an unearned run in the third inninghe Angels not being able to support Haren – it's nothing new. In his past six starts, Haren has allowed just seven runs (six earned) in 41 innings (a 1.32 ERA) with 40 strikeouts and 24 hits allowed. But he has just two victories to show for it thanks to a lack of run support. Matt Palmer gave up a leadoff double to Jeff Francoeur in the 12th inning. After a walk and a sacrifice bunt put the winning run at third base, Palmer struck out pinch-hitter Mitch Moreland to move within a run of escaping. But a high fastball to Julio Borbon glanced off Mathis' glove, allowing Francoeur to scramble in from third with the go-ahead run.  "I just missed it," Mathis said. "It wasn't a cross-up or nothing. It was a little cut, that's what his fastball does. I just misjudged where it was going and it didn't hit in the pocket.  "We're scrapping and clawing. Matty's out there doing his thing. Then I miss a ball like that – it sucks pretty bad."

First, let me fix that Jeff Mathis quote, "Then I miss a ball like that – it sucks I suck pretty bad."  Okay, that's better (although I wonder how it could suck pretty good? Nevermind).  I don't know why, but last night's game really got to me.  It wasn't unlike many of the other 76 Angel loses this season, but for some reason this game "hurt" more than the others.  You would think that after a season like this one, a season filled with defensive mistakes, offensive ineffectiveness, and outright bad play, I would be immune to this sort of play.  Apparently not.  From Juan Rivera's crappy route and lackadaisical play in the second inning, to Torii Hunter's lazy jog down the first base line after hitting a groundball to short in extra innings, it made me realize this season is over.  Here's some vid: Gubicza catches Francoeur's foul ball - Angels broadcaster Mark Gubicza makes a nice grab on Jeff Francoeur's foul ball in the booth in the top of the fourth...by staying within himself and not changing his eye-level. Napoli belts a game-tying shot to right - Mike Napoli knots the game at 1 with one swing, sending a solo home run to right off C.J. Wilson in the bottom of the seventh, Wood snags Blanco's grounder, spins for out - Brandon Wood makes a pretty play at short, fielding Andres Blanco's grounder and spinning to throw to first for the out.  It's a shame Wood couldn't get anything going with his bat because I've really enjoyed watching him play the field. Blanco starts the inning-ending double play - Andres Blanco stops Torii Hunter's grounder and throws to second from his knees to start the inning-ending double play.  Hunter is a great player, but this is inexcusable.  Francoeur scores the go-ahead run in 12th - Jeff Francoeur comes in to score the go-ahead run on Jeff Mathis' passed ball in the top of the 12th.

Stauffer, Tejada lead Padres back into first place -  CBSSports.com
Tejada's two-run homer gave the Padres a 3-1 victory against the Los Angeles Dodgers on Wednesday night and a half-game lead on San Francisco as they returned to the top of the standings for the first time since last Saturday.

It would be one thing if Napoli were a good enough catcher to play that position every day, but he's got an unreliable arm and he's too bulky to block the plate well. Look deeper into Napoli's numbers and you realize a lot of what he does is flash without substance. His bat isn't reliable enough to make him a desirable designated hitter or first baseman. He has batted .268 with the bases empty this season and .211 with runners on. Against right-handed pitchers, he's hitting .210. His RBI total -- 67 -- is paltry given all those home runs.

Saxon's back!  And still not making sense!  What does he mean Napoli's to bulky to block the plate well?  Does he mean blocking the plate on pitches in the dirt?  Or blocking the plate when a runner is trying to score?  Either way, isn't bulk a good thing in those situations?  Next, he mentions Napoli's clutch hitting skills and lack of RBI.  Let me explain this to you again...clutch hitting does not exist.  It's not a skill that a player can develop or be naturally good at.  It's a myth, get over it.  Next, RBI's are team dependent.  Obviously, there has to be runners on base for Napoli to drive in.  The Angels are 12th in the league in on-base percentage, meaning it's hard to drive in runs with the runners sitting in the dugout.  Here's a quick quiz;  Of the following players, who has the highest career slugging percentage?  1) Torii Hunter, 2) Hideki Matsui, 3) Bobby Abreu, 4) Mike Napoli.  Answer:  Napoli (.491), followed by Abreu (.489), Matsui (.480), and Hunter (.471).  Don't get me wrong, I'm not saying the Angels shouldn't trade Napoli.  I'm just saying not for the reasons Saxon is talking about. 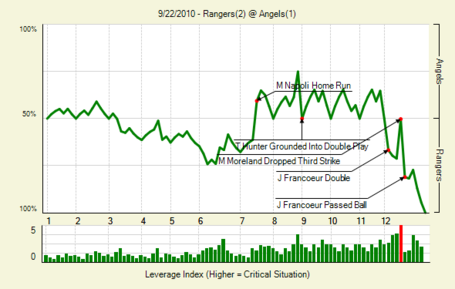 Rays to move forward with big payroll reduction, owner says -  USATODAY.com
The Rays lead the AL wild-card race by 6 games entering Thursday. Their record $71.9 million payroll is about $90 million less than that of the Red Sox, who are second in the AL race. Sternberg is expected to drop the payroll to $50 million or less. He said the team won't come close to turn a profit this year, according to the St. Petersburg Times.

September 23 - BR Bullpen
Events, births and deaths that occurred on September 23.
1845 - The Knickerbocker Base Ball Club is formed, and Alexander Cartwright's 20 rules (presented September 13, 1845) are adopted and on the seventh day, God created baseball.
1902 - Boston beats the Giants, 2 - 1, with both runs scoring on wild pitches by Christy Mathewson.  No, Jeff Mathis wasn't behind the plate.
1908 - Giants P Christy Mathewson and Cubs P Three Finger Brown battle in the most controversial game ever played. The score is 1 - 1, with two outs in the last of the 9th when Fred Merkle's failure to touch second after an apparent game-winning hit by Al Bridwell scoring Moose McCormick from third costs the Giants a 2 - 1 win; the ump calls Merkle out and rules the game a tie. Merkle's 'boner' will eventually cost the Giants the flag.
1951 - In New York, it is Sal Maglie Day and Maglie responds by winning his 22nd game in beating the Braves, 4 - 1, despite allowing 13 hits. It is the most victories by a Giant since Carl Hubbell in 1937.  Why doesn't baseball have "Days" anymore?  Were they replaced by bobbleheads?
1978 -  The Angels' 27-year-old OF Lyman Bostock, a .311 lifetime hitter, is killed by a shotgun blast while riding in a car in Gary, IN. The shot was meant for one of the other passengers in the car.
1988 - The Angels fire manager Cookie Rojas and the Phillies fire manager Lee Elia. Third base coaches Moose Stubing (California) and John Vukovich (Philadelphia) will manage the clubs for the remainder of this season. Stubing will return to the coaching box after going 0 - 8.  The Moose Stubing era was way too long.
1997 -  Angels Lefty OF Jim Edmonds hits a pair of home runs off Randy Johnson, but Seattle wins, 4 - 3, to clinch the American League West. Johnson won't give up another home run to a lefty until John Olerud takes him deep in Game One of the 1999 NLDS.
2008 - Softbank Hawks skipper Sadaharu Oh announces he will retire at the end of the year, stating that his health (battling cancer) had been a distraction for the players.  The cancer wasn't a distraction to him, just to the players.
Happy b-day:
1943 - Winston Llenas, infielder
1952 - Jim Morrison, infielder and poet.
1972 - Pep Harris, pitcher