Angels manage rare trick – a come-from-behind win - The Orange County Register
Monday's triple-digit temperatures were far more intense than the stakes as the Angels and Oakland A's fight it out for second place in the AL West. But the A's bullpen melted down in the seventh inning of a 6-5 Angels victory. The win moved the Angels within one game of the second-place A's and kept alive their hopes of avoiding their first losing season since 2003 (they need to go 5-1 the rest of the way).

It's come down to this, playing for second-place during a heatwave. Even the highlights are lacking drama, RBI singles and HBP: Angels rally in seventh to take down the A's - The Angels battled from behind in the seventh, plating three runs in the frame, and held on for a 6-5 win over the A's, Napoli beats Anderson's throw to the plate -Mike Napoli just beats Brett Anderson's throw home on Erick Aybar's fielder's choice, Matsui ties the game with an RBI single - Hideki Matsui plates the tying run with a single to center field in the seventh.

Athletics-Angels Preview - MLB News - FOX Sports on MSN
Though Los Angeles will fail to win its sixth West crown in seven years, Haren is certainly not to blame. The right-hander has received three runs or fewer in 11 of 12 starts for his new club. He has compiled a 1.32 ERA over his last six outings, but has only two wins to show for it. The A's are trying to avoid matching their season-high five-game slide from May 12-16. They need to win five of six to finish with a winning record for the first time since 2006, when they last won the West. Another strong start from Dallas Braden (10-13, 3.49) could move them within one game of .500. The left-hander was superb last Thursday, tossing eight one-hit innings while striking out seven in a 5-0 victory over the Rangers. He had lost each of his previous four starts, compiling a 6.23 ERA while pitching through the sixth inning just once.

"I have mixed feelings," said infielder Brandon Wood, a close friend of Adenhart, 22, and Henry Pearson, 25, who was also killed in the crash. "It's a way for all of the families and us to get some closure, but it's unfortunate all the way around. "A kid goes to jail for maybe the rest of his life. If that's not a wake-up call . . . you drink and drive, and now you have 50 years in a cell to think about what your drinking did one night. It's a sad story."

Can Angels reverse RISP struggles in 2011? - The Orange County Register
Going into Monday's game, the Angels had batted .186 (62 for 333) with runners in scoring position over their past 43 games. That has continued a season-long problem, leaving the Angels 27th in the majors in hitting with RISP (.244) just a year after they led the majors and set a club record by hitting .297 with RISP. Like their average with runners in scoring position, the Angels also rank 27th in the number of at-bats they have had with RISP. A year ago, they were third in RISP at-bats, first in hits and runs generated in those at-bats (by a wide margin).

The most important thing to take away from the above clip is the Angels reduced chances to score. This is directly attributed to the plummeting on base percentage. This season, the team's OBP ranked second to last in the A.L. (currently .312) compared to last season's OBP of .350 which ranked 3rd. How big is the difference between anOBP of .312 and .350? It's about 2 base runners per game, or roughly projected to be around 350 less guys on base this season. To move this along further (without any scientific formulas, which means I'm pulling numbers out of...the air), if the Angels continued to get runners on base at the same rate as last season, and hit at the same clip with runners in scoring position as they have this season, the team would have scored roughly 80 more runs. About a 12% increase.

Will the Los Angeles Angels have the cash to back up their offseason aspirations? - ESPN Los Angeles
Moreno has been oddly absent during this disappointing Angels season. When was the last time you saw a quote from him? The All-Star Game, maybe? The last time I saw him, he politely declined an interview request. I've been covering this team since 2003 and hadn't before seen Moreno do that. From a media and fan perspective, he's one of the game's most approachable owners.

Saxon points out something I hadn't noticed until reading his post, where's Arte? I haven't read anything where he's quoted, and for him to miss the organizational meeting held a couple weeks ago is confusing. During a season where there are so many questions popping up, this is the time he is needed most. Hopefully, everything is well with the Moreno family.

Texas Rangers to receive $3 billion in new 20-year TV deal - USATODAY.com
It is the highest TV package for a team that doesn't own its own channel. And yes, that's $150 million a year before even playing a game, plenty enough to re-sign ace Cliff Lee, bring in free-agent outfielder Carl Crawford, or whoever else they wish. In comparison, the Dodgers make about $45 million a year off their TV deal with Fox.

There are reports that the amount might not be that high. This article from the Dallas Morning News mentions the price paid by Fox could be closer to $1.5-$1.6 billion, but could include a sort of signing bonus. Any infusion of cash to the Ranger organization is bad news to Halo fans. We've been used to the inept Tom Hicks' money management style, now things may have gotten tougher for the Angels. 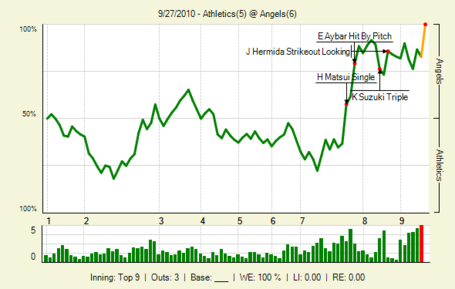 They've moved up some of the dates for off season dealings. Revise your calendars.

Ten thoughts on Ken Burns' 'Baseball: The Tenth Inning' - Yahoo! Sports
After waiting 15 years for the present to turn into ripe history suitable for his documenting, Ken Burns returns to his PBS "Baseball" world with the airing of "The Tenth Inning" on Tuesday and Wednesday night.

Just in case you might have missed the news, there's a new Ken Burns PBS Baseball documentary tonight (at the same time as the game). Set your DVRs.

The Sabermetric Project and the "Science of Words" - FanGraphs Baseball
Still, it’s a fact: especially in the early years of the Abstract, when he was writing and publishing his annual almost entirely by himself, James’ output was incredible. For not only was he doing all that junk on his own, but he was, more or less, inventing a genre of literature.

How Liriano became a staff ace again - The Hardball Times
While you can attribute some of that to Liriano's returning arm strength, he's also adjusted his mechanics to maximize his output.

Cool graphics, something that'd be interesting to see done with Kazmir.

Watch This High School Quarterback Hurdle A Standing Defender (Update) - Deadspin.com
Watch in awe as Marky Thompkins of the East Liverpool (Ohio) Potters shows off his ridiculous athleticism by jumping clear over a defender to get into the end zone. H/T Nic. Update: It's necessary to add that the play was called back. According to JJHUddle.com, in Ohio high school football, "hurdling a player who has a one or two feet on the ground is a penalty."

Although the play was called back, it's still a cool video.

September 28 - BR Bullpen
Events, births and deaths that occurred on September 28.
1919 - In the shortest nine-inning game in major league history, lasting only 51 minutes, the New York Giants beat the Philadelphia Phillies, 6 - 1. About 6 minutes per inning.
1920 - A grand jury indicts eight members of the Chicago White Sox on charges of fixing the 1919 World Series in the "Black Sox Scandal."
1974 - Nolan Ryan pitches his third of seven career no-hitters, striking out 15 batters and beating the Minnesota Twins, 4 - 0, at Anaheim Stadium. He also walks eight to run his season total to 202 bases on balls, joining Bob Feller in 1938 as the only pitcher to walk more than 200 in a season. Ryan will again top 200 in 1977.
1975 - For the first time in MLB, four pitchers share a no-hitter when Vida Blue, Glenn Abbott, Paul Lindblad and Rollie Fingers of the Oakland Athletics combine to no-hit the California Angels, 5 - 0, on the final day of the season.
2008 - The Angels set a franchise record with 100 wins with a 7 - 0 romp of the Rangers. They finish with the best MLB record of 2008.
2009 - The Angels crush Texas, 11 - 0, to clinch the AL West title for the third straight year. Kendry Morales, who has emerged as a top hitter this year, leads the charge with a homer and 3 RBI. The Angels have dedicated the season to pitcher Nick Adenhart, who died in a car crash in April, and honor his memory during the post-game celebrations. I can still see it in my mind (and probably always will)