Angel defense results in win, How much for Beltre? Halolinks

Share All sharing options for: Angel defense results in win, How much for Beltre?  Halolinks

Angels' 4-2 win over A's is a game of give and take for Peter Bourjos - Los Angeles Times
...the rookie center fielder showed some take-away abilities, as well, diving into the gap in left-center field to rob Rajai Davis of a potential triple in the third inning and leaping above the wall in straight-away center to rob Landon Powell of a two-run homer in the fourth to help the Angels defeat the Oakland Athletics, 4-2, in Angel Stadium. Dan Haren gave up two runs and six hits in six innings, striking out five and walking one, to improve to 4-4 with the Angels, but he wouldn't have won without the defensive help of Bourjos. "The plays he made ... he took away a triple from Davis and a two-run homer from Powell," Haren said. "He's amazing out there. The jumps he gets and the ground he covers ... he's special. I didn't think he had a chance on the ball Davis hit, but he closes ground so quickly. If he's close, he usually gets to it." It marked the third time this season that Bourjos has robbed an opponent of a home run, but Hunter called the play on Powell's blast on Tuesday night Bourjos' best effort. "He gave me goose bumps," Hunter said. "That's a pretty good compliment," Bourjos said.

Within this article from the OC Register, Bourjos making it easier on Angels staff, Haren makes a good point, and one often overlooked by some fans, "That play he made was as good as hitting a two-run homer." In other words, a run prevented is just as valuable as a run scored. And this was one of the things the Angel defense did poorly this season...preventing runs. Not the unearned type caused by fielding errors, but rather the type when an aging left fielder misplays a flyball into a triple. The boxscore doesn't reflect the play accurately when it places the blame on the pitcher and not the fielder. Just thinking off the top of my head, there were at least 6 games where the defense had a direct impact on the game outcome which traditional metrics place the blame on the pitcher. Bourjos' play is an excellent example of this. Had he not made the catch, the boxscore would have shown an Angel loss due to the earned runs given up by Haren. Anyway, here's Bourjos' catch (and other highlights): Bourjos' leaping grab robs Powell of a homer - Landon Powell skies one to deep center and Peter Bourjos times the leap perfectly to rob him of a homer, Bourjos lays out in center for the catch - Rajai Davis is robbed of extra bases as Peter Bourjos makes a great diving catch in center field, Wood dives to rob Powell of a hit - Landon Powell is robbed of a hit as Brandon Wood makes a great diving play at shortstop (poor Landon Powell), Hunter's homer opens up the scoring - Torii Hunter hits home run No. 22 on the season, a solo shot to left that gives the Angels a 1-0 lead.

Athletics-Angels Preview - FOX Sports on MSN
Out of organized baseball in 2006, Anaheim native Bobby Cramer used to go to Angel Stadium to watch another former Long Beach State pitcher - Jered Weaver - take the ball during his rookie season with Los Angeles. On Wednesday, with his team trying to avoid a season-high sixth straight loss and falling behind the Angels into third place in the AL West, the Oakland Athletics 30-year-old rookie finally gets a chance to pitch at his hometown park. Born in Anaheim and a standout at Loara High School, Cramer (2-1, 3.71 ERA) took a circuitous route to the majors, undergoing Tommy John surgery his senior season in college and even spending time as a substitute algebra teacher in Anaheim during his two years away from the game in 2005-06. Needing to finish at least 4-1 to avoid its first losing season since 2003, Los Angeles (77-80) will look for a quality start from Joel Pineiro (10-7, 3.96), who will make his final start of the year in the team's final home game of 2010. In 14 innings since coming off the disabled list, Pineiro has six strikeouts and no walks. He is 1-0 with a 1.69 ERA in two starts versus the A's this season.

I would say probably," Shields, when asked whether he would retire, said before the Angels' game against the Oakland Athletics on Tuesday night. "There's a business side of it and a personal side of it. From a business side, just look at the bullpen here."From a personal side, my family comes first, and I've missed too much of my life with them, so it might be time to go home. I had a great time here. I wish the organization the best of luck in the future."

Classy guy, and great player. If/when Shields retires, he'll be the last Angel from the 2002 team. 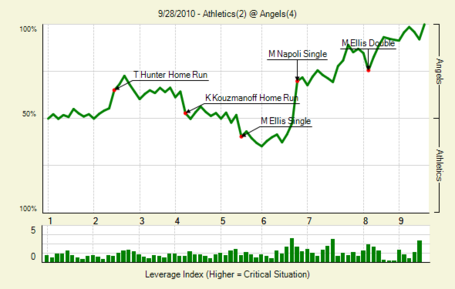 Daily Playoff Pitch: Reds, Rays and Yankees are in; Giants opening gap in NL West - USATODAY.com
Reds outfielder Jay Bruce hit a walk-off homer in the ninth inning Tuesday, and the Reds partied like it was 1995, clinching their first National League Central title in 15 years with a 3-2 victory Tuesday over the Houston Astros.The Tampa Bay Rays and New York Yankees also clinched at least a wild-card berth with their victories. They still are separated by only one-half game in the AL East standings, but they're each assured of making it.

There's only two more playoff spot remaining with three teams still in the hunt. Either the Giants or Padres will win the N.L. West with the one of those teams or the Braves taking the wildcard spot. As it stands right now, the Padres are 1.5 games behind Atlanta for the wildcard.

Contract Crowdsourcing Results: Adrian Beltre - FanGraphs Baseball
The crowd estimates that Beltre will land a $4 year, $52 million contract this winter, but the gap between three and four years was pretty small, so we could more accurately estimate it as something like three guaranteed years with an expected fourth year option, or something along those lines.

Just in case you've got your Excel spreadsheet open and are trying to figure out the 2011 Angel payroll.

September 29 - BR Bullpen
Events, births and deaths that occurred on September 29.
1879 - Baseball's reserve clause is born. National League owners, seeking to limit player salaries, led by Boston's Arthur Soden come to a secret agrerement whereby five players on each team will be "reserved" - off limits to all other clubs. The reserve clause will be in effect for the 1880 season. The owners tell the newspapers that they have agreed upon a uniform contract with no salary advances.
1919 - Arnold Rothstein decides to finance the World Series fix. The plan calls for Nat Evans to give a $40,000 advance to Sport Sullivan to give to the players with an additional $40,000 to be put in a safe at the Hotel Congress in Chicago, IL. Evans takes $29,000 and bets on the Cincinnati Reds, giving Chick Gandil only $10,000.
1920 - Babe Ruth hits his major league record 54th home run on the last day of the season. Only one other team in the American League will hit more than 44 homers. This is one of the most amazing "strange, but true" baseball facts I've ever read. It's so far beyond description, I can't even think of a modern day comparable.
1954 - Willie Mays makes his famous running catch off the bat of Vic Wertz in game one of the World Series. 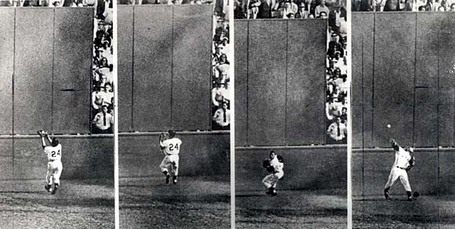 Happy b-day:
1867 - Hunkey Hines, outfielder (d. 1928) Duncan's more masculine brother.
1960 - Rob Deer, outfielder I'm not a douchebag (at least I don't think I am), but the most douchiest thing I've ever done involved Rob Deer. I used to play in a face-to-face Strat-O-Matic league and for awhile had Deer on my team. Each time he'd come to bat I'd announce it by calling him "Bomba". You know, bomba-deer. Anyway, my best friend hated when I did that as it totally got on his nerves. Deer would come to bat, I'd say "Now batting, BOMBA!", and you could see him physically cringe. Eventually he asked me not to do it anymore. I told him "no". So Ken, happy birthday BOMBA!