Angels end home schedule with win - The Orange County Register
Hunter and Pineiro's performances aside, it wasn't all smiles inside the ballpark Wednesday. For starters, the team reminded the announced attendance of 39,199 that it couldn't come up with the big hit – a problem plaguing the Angels all season. The Angels went 1-for-10 with runners in scoring position with Hunter's game-winning single as the only hit. The Angels had the bases loaded with less than two outs in the ninth and 10th innings and failed to push across a run.

Yesterday's game was a typical 2010 Angels game...good starting pitching, crappy clutch hitting. That's all I have to say about that. Napoli pulls down a liner in the third - Mike Napoli makes the play on a hot shot off the bat of Cliff Pennington in the third. Anyone else surprised with how well Napoli has done defensively at first base? Give the guy credit, I'm impressed. Hunter knocks a walk-off single in the 11th - Torii Hunter plates Jeff Mathis from second base with a single in the 11th, sending the Angels to a 2-1 walk-off win. The one Angels hit with runners in scoring position.

Angels-Rangers Preview - FOX Sports on MSN
A season-ending four-game series between the Texas Rangers and the Los Angeles Angels could have had major playoff implications. Instead, it'll just serve as a postseason warmup for the AL West champion Rangers. Cliff Lee attempts to create some of his own momentum in his final regular-season appearance when Texas hosts the Angels on Thursday night. Lee is 4-6 with a 4.25 ERA in 14 starts since Texas acquired him in a six-player trade from Seattle in July. He threw a complete game but lost 4-1 to the Angels on Aug. 1, ending a personal five-game winning streak over Los Angeles. Los Angeles starter Scott Kazmir (9-15, 6.03) will take the mound for the final time this year, ending a difficult season that included a stint on the disabled list with shoulder fatigue. The left-hander has set career highs in losses and ERA, and is 2-10 with a 7.00 ERA in his last 14 starts. He struggled again Saturday, surrendering five runs in three innings of a 6-2 loss to Chicago. Kazmir has lost both of his starts to Texas this season, surrendering nine runs in 11 2-3 innings.

I knew Kazmir has been struggling, but 2-10 over his last 14 starts? An ERA of 7.00?? This series against Texas might have met something if the Angels had won at least half of those 14 games. I'm not saying it's Kazmir's fault the Angels didn't reach the playoffs, but geez.

...the farm system, among the top five in the game from 2005 to 2007, has fallen to 25th according to Baseball America's most recent rankings. The club has also developed very few power hitters in recent years.In addition to Bane's dismissal, the Angels fired three amateur scouts, Jim Bryant, Bart Braun Jr. and Jeff Scholzen.However, there were indications from sources familiar with the Angels' front office that philosophical differences between Bane and Reagins led to the split. Bane, who was hired by former general manager Bill Stoneman, is more of an "old-school" baseball man, a former major league pitcher with a background in scouting and coaching. Reagins, the team's farm director when Bane was hired in 2003, never played baseball professionally and is part of a relatively new generation of executives who rely heavily on statistical analysis. As a result, the two did not always see eye to eye on players in the farm system.

The OC Register mentions the club wants to hire his replacement rather quickly. Does that mean they already have someone lined up for the position?

Angels part ways with scouting director - The Orange County Register
The team wouldn't comment on the circumstances surrounding the parting of ways, but general manager Tony Reagins did say the club wants to move quickly in finding Bane's replacement. "I think there's always a timetable," Reagins said. "You want to get the new person an opportunity to get a staff together and to move forward. We're going to begin that process really soon."

Is this the first of a few moves planned? If so, who's next? And where's Arte? 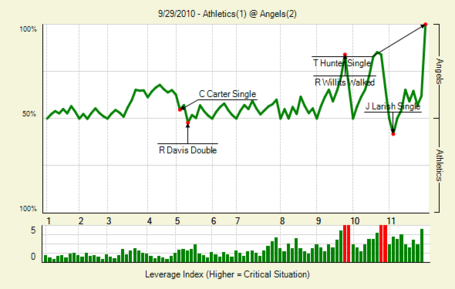 And That Happened: Wednesday's Scores and Highlights - HardballTalk
Angels 2, Athletics 1: The first sentence of the AP game story: "Torii Hunter's two-out single had barely hit the outfield grass when pink fireworks shot up from the fake rock pile at Angel Stadium." That sounds less like a game story than the opening lines of a novel written by a sophomore creative writing student. It's about suburban ennui and the lack of authenticity in 21st century America. He wrote it in his parents' basement in a upper middle class enclave -- maybe Lake Forest, Illinois (or Lake Forest, California) -- right after an argument with his father about the scratch he put in door of the Volvo on the way back from Hot Topic, where he was buying a Che Guevara shirt.

Just thought this was humorous.

When I watched this video, the first thing I thought of was, "why are they congratulating and jumping all over Cruz? What did he do?". Especially considering HE STRUCK OUT.

Feel-good moments from the 2010 season - ESPN
Walk-off homers and dazzling debuts make for happy endings, but the best feel-good stories provide a touch of humanity that can't be celebrated with a shaving cream pie in the face. Sometimes it's less about baseball than about bonding with family, or achieving a personal triumph after an injury or different kind of setback.

These are some of the great stories from this season...and some of the things that make baseball so great.

Young throws 5 strong innings to lead Padres - Yahoo! Sports
Chris Young and four relievers combined on a four-hitter and the Padres showed some life in the waning days of the season, beating the Chicago Cubs 3-0 on Wednesday night to remain 1 1/2 games behind Atlanta in the NL wild-card race.San Diego remained two games behind first-place San Francisco in the NL West. The Giants beat Arizona 3-1 on Wednesday night.

Deuce with Bob Uecker - Foxsports
Deuce: I think it’s great! So, you’ve been a player, a broadcaster and an accomplished actor – how did you get interested in all of these?
Uecker: When I acted it was when I was playing baseball -- that was the real act. I was born and raised here in Milwaukee and I played sandlot baseball here in Milwaukee then signed with the Braves as a young guy and went on from there. But you know it was a big kick for me to play here in Milwaukee, having been born here and then being able to play on an MLB team.
Deuce: How did you get the name "Mr. Baseball"?
Uecker: I gave it to myself.

Bob Uecker is one of the best announcers in baseball, and probably the funniest.

September 30 - BR Bullpen
Events, births and deaths that occurred on September 30.
1973 - Angel Ron Perranoski announces his retirement after 13 years as one of the premier relief pitchers in the major leagues.
1976 - The Chicago White Sox try a different approach against California, using a lineup in numerical order by field position. The batting order is: Brian Downing - 2: Lamar Johnson - 3: Bill Stein - 4: Kevin Bell - 5: Bucky Dent - 6: Alan Bannister - 7: Chet Lemon - 8: Jerry Hairston - 9. Finishing off the lineup is 53-year-old DH Minnie Minoso. The Angels are unimpressed, winning, 7 - 3.
1984: On the final day of the season, Mike Witt uses only 97 pitches to retire 27 consecutive hitters. The Angels' hurler throws the perfect game against the Rangers and beats Charlie Hough on an unearned run, 1 - 0.
1989 - Nolan Ryan strikes out 13 Angels in a 2 - 0 three-hitter to raise his season total to 301. It is his 6th 300-strikeout season, but first since 1977. Traitor. Not really. Well, maybe.
2000 - The Mariners outslug the Angels, 21 - 9. It is the most runs ever scored against the Angels and the two teams combine to have 18 players scoring runs in the game, one short of the American League record. Alex Rodriguez drives home seven runs for Seattle, with four hits, including two home runs.
Happy b-day:
1963 - Mat Gleason, art critic, publisher, Angel fan.

I still love you Joel: