Choo's single spoiled another solid outing from Angels starter Dan Haren, who allowed just two runs in 7.0 innings. Haren's only trouble came in the sixth inning when he walked three batters in a row, including a four-pitch walk to Luis Vilbuena with the bases loaded. "I don't think I've ever done it," Haren said. Haren's had 26 starts this season with less than three walks, making the sixth inning an oddity. The Angels have now lost four straight at home to teams that are a combined 58 games under .500.

Anyone else think it was weird how Haren just suddenly forgot where the strike zone was? Especially after getting the first two outs and having Duncan 0-2 before issuing his first walk of the inning. Could it be a case of a pitcher over-thinking or trying to be too fine since the offense has been non-existent in his other starts? Whatever. Here are a couple highlights: Mathis picks off the go-ahead run at first - Jeff Mathis fires down to first base to catch Asdrubal Cabrera straying from the bag in a tie ballgame (and thus earning himself more playing time), Hunter goes deep to tie it in the sixth - Torii Hunter ties the game at 2 with an opposite-field home run in the bottom of the sixth

Indians-Angels Preview - FOX Sports on MSN
Looking to prevent their first five-game losing streak at Angel Stadium since April 28-May 2, 2006, Los Angeles will give the ball to right-hander Trevor Bell (2-4, 4.85 ERA). The converted reliever allowed two runs in Wednesday's 4-2 victory at Seattle, winning his first game since May 10. Bell, 1-1 with a 2.77 ERA in his last two starts, gave up a career high-tying nine hits in six innings, but held the Mariners to 1 for 9 with runners in scoring position.The Indians, who are going for their first series win on the road since July 30-Aug. 1 against Toronto - and their first in Anaheim since 2005 - will look for another solid start from Justin Masterson (5-12, 5.04). The right-hander had one of his best outings of the season in Tuesday's 4-3 loss to the White Sox, surrendering one run and four hits in 7 2-3 innings.

Wood working to regain form - The Orange County Register
Brandon Wood has blisters on his fingers. Wood, the Angels' starting third baseman when the season began, has started just seven times in the past 33 games with a total of 15 at-bats since the All-Star break. The blisters are from the daily sessions with hitting coach Mickey Hatcher — in the batting cages, on the field and with soft-toss. "We're trying to find his swing, trying to get him to teach himself about his swing," Hatcher said. "And we're doing it. He's made a lot of progress. I really think when he gets back out there in games, he's going to have a much better feel for his swing."

Recently on Halos Heaven, there was a discussion as to what exactly a major league hitting coach actually does. The above linked article, although it's a few days old, kind of answers that questions, at least in regards to how Hatcher works with the younger guys.

Padres snap 10-game skid, beat Dodgers 4-2 - Yahoo! Sports
"You would never have thought that winning one game would be so important," said Mike Adams(notes), who won in relief. "That’s the biggest win that we’ve had maybe all year. I’m kind of lost for words on it. The past 10 days, nothing went our way. We couldn’t catch a break. To come out tonight and get that win out of the way, hopefully that changes the tide a little bit and we’ll get on a little roll now." The Padres kept their one-game division lead over the San Francisco Giants, who won 2-0 in 11 innings at Arizona. The losing streak was San Diego’s longest since a franchise-record 13-game slide in May 1994. The free-fall trimmed 5 1/2 games from the Padres’ lead and dropped them from having the best record in the NL to the third-best.

The Padres making the playoffs might be the only bright spot for Southern Cal baseball fans...if they can hold on.

Who Really Made The Call? - Bugs & Cranks
As you can clearly see, Marquez is not looking in the direction of Young and Anderson when they touched, yet the video shows him stepping into view calling Young out. He then made a shoving gesture to Young which I read as him saying the coach physically assisted.

I kind of feel bad for the Rangers on this play (no, not really), as it looks like they got hosed (no, not really). The author of the above linked post does ask a good question, if you watch this video (Twins win the game on disputed final out - The Twins win it 6-5 as Michael Young is called out for incidental contact with the third-base coach, the final out of the ninth), at about the 50 second mark the umpire isn't even looking in the right direction to make that call. 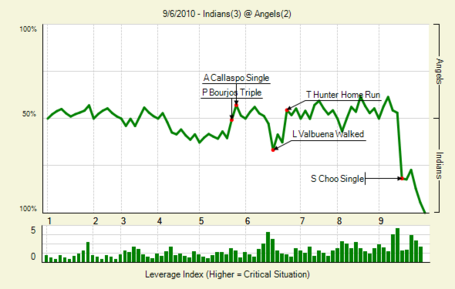 September 7 - BR Bullpen
Events, births and deaths that occurred on September 7.
1974 - During a 3 - 1 win over the Chicago White Sox, California's Nolan Ryan has a fastball clocked at 100.8 miles per hour - the fastest pitch ever recorded.
1997 - The major league mark for the most combined strikeouts in a game is tied when 33 players whiff during a fifteen-inning 5 - 4 Angel victory over the Tigers.
Happy b-day:
1946 - Joe Rudi, outfielder; All-Star

Rodney and his deceptive 3.97 ERA: