Angels score just one run, for the 20th time. Halolinks

Share All sharing options for: Angels score just one run, for the 20th time.  Halolinks

Travis Hafner hit a go-ahead homer that was upheld by video replay and No. 9 batter Lou Marson broke the game open later in the sixth inning with his first career grand slam, leading the Cleveland Indians to a 6-1 victory over the fast-fading Los Angeles Angels last night. The Angels lost for the 11th time in 15 games, keeping the three-time defending AL West champions 9 1 / 2 games behind division-leading Texas with 23 remaining. The Angels, who have spent one day alone in first place all season, have lost five straight home games for the first time since 2006 - the last time they failed to reach the playoffs.

The only thing offensive about the Angels is their lack of anything offensive. It's pretty sad when the opposing team's number 9 hitter drives in more runs than your team has scores in 4 of the last five games. There was some good news from last night's game...Reggie Willtis went 3-for-3 and got on base 4 times, Torii Hunter belted another home run (Hunter belts his 21st homer of the season), Rich Thompson is looking good, and Trevor Bell has allowed only two home runs in 61 innings. For all you masochists out there, Marson crushes a grand slam to left-center - Lou Marson puts the Indians ahead by a wide margin when he deposits a pitch over the fence with the sacks packed in the sixth.

Indians-Angels Preview - FOX Sports on MSN
The Angels try to prevent their longest home losing streak in eight years and avoid being swept by the Cleveland Indians in Wednesday's series finale. Los Angeles (66-73) has won each of the last three West crowns, thanks in part to a 153-90 home record from 2007-09 - third-best in baseball. The Angels also don't appear to have the right person taking the mound in the series finale to give them the best chance of ending their home slide. Scott Kazmir (8-13, 6.19 ERA) has lost his last seven home starts since defeating the Yankees on April 25, recording a 6.81 ERA in those outings. He's also been frustrated regularly by the Indians (57-82), going 0-1 with an 11.20 ERA in his last three starts against them. Trying to sweep their first series since taking four in a row from Detroit from July 16-18, the Indians will counter with Josh Tomlin (3-3, 4.14), who tries to win his third consecutive start. Tomlin allowed three runs - all in the third inning - and seven hits while striking out five and walking none in six innings of a 6-3 win over Seattle on Thursday.

Okay, we get it. Scott Kazmir's awful. Move on.

Six All-Stars among candidates for Roberto Clemente Award - USATODAY.com
The award in Clemente's name is given to players who best exemplify his combination of community involvement and performance on the field. Fans can help select the winner by voting at www.chevy.com/clemente, with their choice counting as one vote along with those cast by a panel of 17 that includes Commissioner Bud Selig. The winner will be announced during the World Series.

From the email sent out by MLB:

I’m reaching out to let you know that Torii Hunter was nominated as a finalist for the Roberto Clemente Award, which is given every year to a baseball player to recognize his community service efforts.

Torii created "The Torii Hunter Project," which is a comprehensive, long-term effort to impact youth in need in various parts of the . The project has four areas of focus related to youth: Sports, Community, Education, and Wellness. We’re hoping you could ask your readers to support Torii by voting at http://www.chevy.com/Clemente, which begins today and runs until October 8. You can read his full bio at the site, as well. A really cool aspect is that any fan who votes is automatically registered for a chance to win a trip to the 2010 World Series, where the national Clemente winner will be announced.

Trumbo eager to contribute - The Orange County Register
the Angels asked their top power prospect (Trumbo) to play some outfield for Triple-A Salt Lake this season. He played 23 games in the outfield, handling 59 chances without an error. Trumbo will continue to work out there this month with the Angels and then head to Venezuela for winter ball with the expectation that he will be a full-time outfielder there. "I’m going to go down to Venezuela and play winter ball for two months and my understanding is first base won’t be part of the equation there. The whole off-season, I’m going to be working as hard as I can to grasp everything – the nuances of playing out there.

I think this is important. The Angels love having depth, but if Trumbo can prove he can handle the outfield, the Angels may decide signing a high-cost free agent (Carl Crawford) might not be necessary. How would an outfield of Trumbo-Bourjos-Trout look in 2012? At the league minimum salary.

Quinlan era comes to an end - The Orange County Register
Robb Quinlan has been released.

A moment of silence as we reflect on the loss of Amanda Quinlan.

Latos strikes out 10, leads Padres past Dodgers - CBSSports.com
Mat Latos bounced back from stomach flu to strike out 10 for the third time in four starts, pitching the NL West leaders to a 2-1 win over the Los Angeles Dodgers on Tuesday night.

The Padres, also known as the "Unofficial Halos Heaven Playoff Team" beat that Los Angeles team. Oh, and by the way, what's up with the missing "t" in "Matt"? Geez. 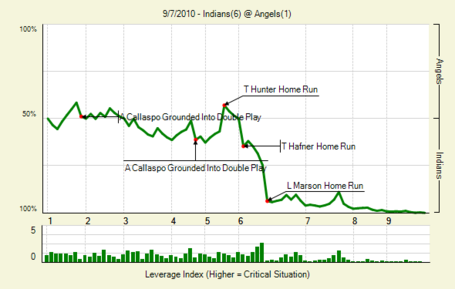 The Top 100 K/100P Leaders - The Baseball Analysts
While the Angels' ace lacks the gaudy win totals and winning percentages of CC Sabathia and David Price (and others), he has clearly been one of the five most effective starting pitchers in the league this season. Weaver can take the next step by pitching deeper into games as he is without a complete game and has only worked more than seven innings three times, primarily due to the fact that he leads the majors in pitches per plate appearance (4.17).

Call the Hall: Hoffman gets 600th save - MLB.com
Major League Baseball's all-time saves leader notched No. 600 on Tuesday night at Miller Park, working around a leadoff single to close out a 4-2 win over the Cardinals.Hoffman, a light-hitting shortstop who converted to pitching in 1991 and finds himself bound for Cooperstown and the National Baseball Hall of Fame when he finally calls it quits, stands 45 saves ahead of the Yankees' Mariano Rivera, who is No. 2 all-time with 555. Lee Smith (478), John Franco (424) and Atlanta's Billy Wagner (417) round out the top five.

Congratulations to Trevor Hoffman for reaching another milestone.

2010 Scouting Report - By the Fans, For the Fans - Tangotiger.net
I want you to tell me what your eyes see. I want you to tell me how good or bad a fielder is. Go down, and start selecting the team(s) that you watch all the time. For any player that you've seen play in at least 10 games in 2010, I want you to judge his performance in 7 specific fielding categories.

Aaron 'saddened' by Bonds, Clemens steroid stories - FOX Sports on MSN
Aaron said he hasn't given any thought to whether Bonds' or Clemens' numbers should stand, be wiped away or accompanied by asterisk. ''I have too much to worry about to worry about Clemens and Bonds,'' he said.

From Dodgers to 'Los Doyers,' Frank McCourt expands - USATODAY.com
The team recently trademarked "Los Doyers" and is selling T-shirts with the phrase on it for $30. "Los Doyers" has grown in popularity in recent years into a popular nickname that makes light at how some Mexican-American fans purposefully mispronounciate the team's name.

He's got attorneys to pay! (someone better trademark "Ayuls" before Frank thinks of it).

The Rays foul-ball lady hits New York for her media moment - Yahoo! Sports
Meet Amelia Lamoscatella. You might remember her from last Wednesday's Tampa Bay Rays game in which not one, not two, but three foul balls were hit to her in the eighth inning. The first rocketed off her chin, but she was able to corral the final two for an unlikely souvenir grab that quickly went viral.

I couldn't get the video to embed, so you'll have to follow the above link to see how cool this lady is. Especially when you see these "winners"... 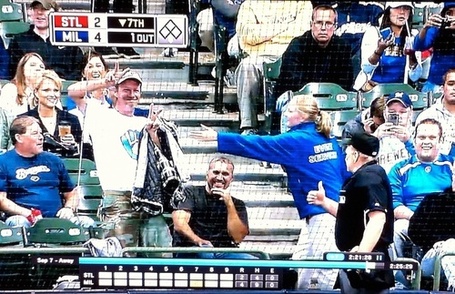 Guy Grabbing A Gal's Boob, Because Why Not - Deadspin.com
By morning, someone's going to have identified this broad, and her sh%$'s going to be plastered all over the Internet. That's life. 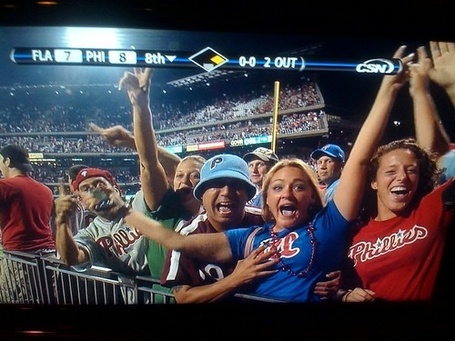 By the way, there's video of the boob grab. Just in case you're into that sort of thing. You know...boobs and stuff. Yeah, boobs.

September 8 - BR Bullpen
Events, births and deaths that occurred on September 8.
1901: The Players Protective Association instructs members to sign one-year contracts only, and not recognize the reserve clause. Yeah, how'd that work out?
1914 - Bill James allows just three hits in beat the Giants, 8 - 3, and dropping New York to the 2nd spot. Is there anything this guy can't do??
1916 - In front the smallest crowd in American League history, A's catcher/outfielder Wally Schang, with 23 fans attending the game, becomes the first switch-hitter in major league history to homer from both sides of the plate in the same game. And almost a hundred years later the A's are still threatening to beat that record.
1965 - Against the Angels, A's Bert Campaneris becomes the first major leaguer to play all nine positions in a single game.
1969 - The Braves acquire veteran pitchers [Hoyt Wilhelm] and Bob Priddy from the Angels in exchange for minor league prospects Mickey Rivers and Clint Compton. Hoyt will only stay for a little while as the Braves will waive the knuckleballer to the Cubs in September 1970.
1998 - Mark McGwire breaks Roger Maris' single-season home run mark by clouting his 62nd of the year off Steve Trachsel in the 4th inning of the Cardinals' 6 - 3 win over the Cubs in St. Louis.
Happy b-day:
1946 - Ken Forsch, pitcher; All-Star and Angels assistant GM
1954 - Don Aase, pitcher; All-Star