Angels Will Have Their Balls Enhanced

Share All sharing options for: Angels Will Have Their Balls Enhanced

Just got this press release from the Angels in the email... 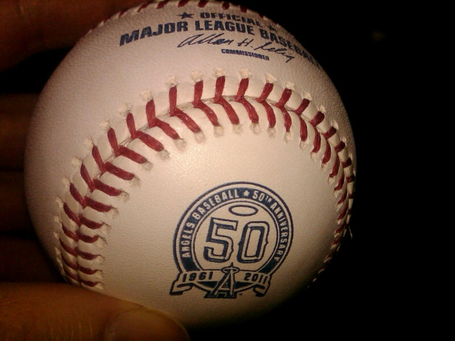 ANAHEIM, CA -- The Angels announced today a commemorative enhancement to the Official Rawlings ® Major League Baseball that will be used on-field during all 2011 home games at Angel Stadium. All Rawlings® baseballs used during game action will now feature the commemorative 50th Anniversary logo. Not only will this add to the 50th Anniversary celebration at Angel Stadium, it will offer fans the unique opportunity to collect a piece of 50th memorabilia for every home run or foul ball that leaves the ballpark.

During the course of an 81-game home schedule, the Angels use over 4,400 baseballs per season (on average). With home runs and foul balls, that amounts to a large number of 50th Anniversary fan souvenirs during the 2011 season at Angel Stadium.

**Angels Baseball 50th Anniversary Celebration**
The 2011 Angels campaign theme is More Than "A" Season, an event that will encompass a 12-month celebration of 50 years of Angels Baseball. Throughout the year, Angels fans will experience a season unlike any they have ever seen before. The 50th Anniversary is about the fans and their celebration of great moments throughout Angels’ history. Many unique events are centered on fan interaction including retro nights and giveaways, 81 first pitches with former Halos, special programming on Fox Sports West, AM830 and more.