Share All sharing options for: LA Angels of Baldwin Hills?!?!

Maybe as part of the fiftieth anniversary of the Angels, Arte Moreno can tweak Anaheim mayortard Curt Pringle with all of the cool locations that the Angels could have landed in their history. Here is one I did not know about: Baldwin Hills! 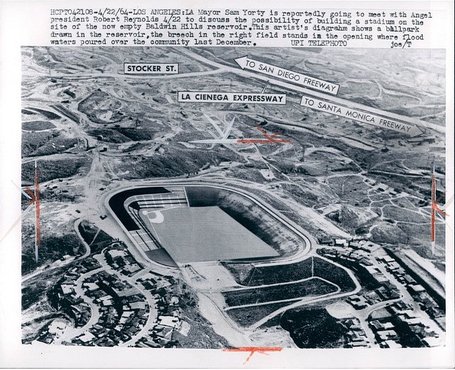 Caption dated April 22, 1964 reads: LA Mayor Sam Yorty is reportedly going to meet with Angel president Robert Reynolds 4/22 to discuss the possibility of building a stadium on the site of the now empty Baldwin Hills reservoir. This artist's diagram shows a ballpark drawing in the reservoir, the breech in the right field stands in the opening where floodwaters poured over the community last December.