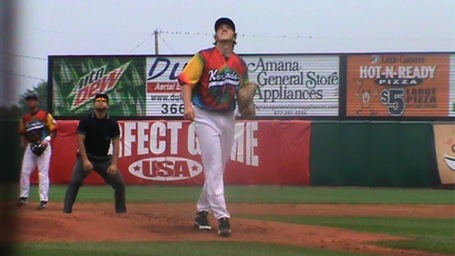 Schugel admires one of the many pop-ups he induced on a muggy July afternoon.

Schugel is currently my favorite Angels' sleeper, coming out of nowhere to post a strong performance at Cedar Rapids, and then holding his own through the Cal League playoff run. He's equipped with a lively fastball, a good change-up, and a fringey, mid 70's curveball that plays up because he can throw it for strikes. The fastball was really his bread and butter pitch, sitting in the high 80's on the day that I saw him but with hard boring action in on the hands of righthanders. Supposedly he dials it up to the mid 90's, so has more in the tank if he needs it, but it looked to me like he preferred the movement and command he could achieve at lower velocity. The ump wasn't calling strikes at the knees, so Schugel adjusted: he pitched further up in the zone, induced a bunch of jamshot pop-ups, and got some swing and misses at the letters.  His control wasn't stellar in the Midwest League overall, but I think the walk numbers are misleading since his command looked effortless when I saw him and his nice-and-easy delivery portends more strikes to come. Plus, he didn't start pitching consistently until turning pro in 2010, so his developmental arc will likely be different - and more exciting - than most late round college arms. He probably doesn't have a tremendous ceiling, but give him a cutter and some more development time and he could be a Jerome Williams type who competently holds down the fourth or fifth spot in the rotation.

Carpenter ended the season as one of the hottest prospects in the organization, yielding no runs through his final 18 innings of work in Arkansas on the way to the playoffs. His arsenal includes a low 90's FB with good sink, a low 80's slider, and the occasional change-up to lefties. He racked up groundballs at an impressive 62% rate in 2011. He also maintained good but not dominant control after a midseason promotion, yielding 2.8 walks per nine in both High A and Double A, though his strikeout numbers tailed off some. I haven't seen Carpenter pitch yet, so don't have any firm impressions of his stuff outside of the numbers, but I would guess that a good comp for him is Bobby Cassevah. Anyone who's seen him, please tell us more below.  Carpenter's debut in the Arizona Fall League was inauspicious -- he was tagged for a game-losing HR in his first appearance -- but he'll get in more work there.

Perez raked through the first half of the year, hitting .313/.412/.416 from the left side and .310/.417/.380 from the right through the end of June. The guy didn't pick up a baseball bat for two and a half months without hitting an opposite field, linedrive knock or working a free pass to first base. Something happened midseason though, because suddenly getting on base just wasn't that easy anymore.  His numbers went into a tailspin, bottoming out only after he lost sixty points in batting average and seven spots in the batting order. I remember a similar thing happening to him three years ago in the Pioneer League, where he started strong only to implode offensively later in the season. He played a sweet shortstop through it all, showing excellent hands and good range, and making up with accuracy what he might lack in arm strength. He's a fine defender, and his ability to work counts and run the bases gives him something to contribute on the offensive side. I think he stays in Arkansas in 2012 as a utility player to expand his defensive versatility and allow him to get a little more consistent with the bat.