Share All sharing options for: Luis Jimenez, Plugging Away In Obscurity: Top Angels' Prospect Performances of 2011

Will Lingo at Baseball America on Luis "Lucho" Jimenez:

Good defender with a good arm, but no plate discipline and fringe-average power for a third baseman. Ultimately, the bat probably isn't there to be an everyday third baseman.

While I wasn't shocked that BA left "Lucho" off of their Texas League Top 20 list, I was surprised to see Lingo be so dismissive of Jimenez' pop; it's not at all clear to me that higher-profile third base prospects like Zach Cox (ranked 14th) or even Jedd Gyorko (9th) pack more punch.  Since the end of the steroid era, third base just hasn't been the power position it used to be, so "fringe" is not the word I'd use to describe a guy who has the power to knock 15 to 20 dingers with plenty of doubles. What word would you use to describe this guy?

Jimenez did his regular high contact/moderate pop/no patience thing in 2011, pacing the Texas League in doubles while ranking second in RBI's.  The positives extend well beyond the counting stats: he hit linedrives at a solid 20% rate; he showed no real platoon split, hitting righties just as well as lefties; he didn't strike out much; he maintained his short, athletic swing; and he continued to play good defense.  While the numbers above probably reflect his ceiling in the major leagues, he's a better bet to approach that potential than most anyone else in the system not named Trout or Richards. That level of production would be approximately equal to Alberto Callaspo's, though it's my feeling that Callaspo's ability to get on base against tough righties is more valuable to the current Angels' club than 6-10 extra HR's over the course of the season.

A word of caution to those who look at Jimenez' good Arkansas numbers and expect him to follow Trumbo's career trajectory: despite out-slugging Trumbo in the Texas League circuit (20 HR's  and a .196 ISO to the latter's 15 HR's and .159 ISO back in 2009), Lucho lacks the first baseman's plus-plus raw pop and in-game power to all fields. He's more of a pull-oriented hitter who takes aggressive hacks off of his front foot, launching balls consistently into the air across the left half of the field. His homerun per flyball rate has hovered around 7%-8% for years, which is actually pretty mediocre; he just hits balls into the air 20% more of the time than the average player, including Trumbo, providing more opportunities for extra base hits. 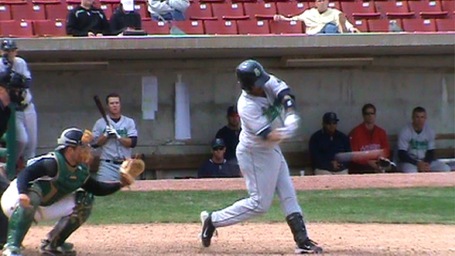 Jimenez smacks a bases clearing, game winning triple back in 2010. Notice how his back foot is entirely off the ground even before he makes contact; he plants on his front foot and uses that as a base to adjust to pitch type and location, but the "front foot" hitting mechanics might limit his HR power.

The high flyball rate is important in projecting Jimenez' production in the big leagues because it means that his batting average on balls in play will likely continue to rest below the mean (his BABIP in 2011 was .295, or 30 points below the average of 50 or so "interesting" Angels' prospects that I have data on). It makes sense: all of those balls in the air mean more pop-ups and fewer groundball singles. While Jimenez' bat has been consistent in the minors, guys at the big league level with his flyball profile tend to be streaky, and even to suffer occasional collapses in their hitting skills. Alfonso Soriano, Chris Young, Curtis Granderson, Ian Kinsler, Mark Teixeira, Ryan Ludwick, Carlos Pena, Carlos Lee, Josh Willingham, Aaron Hill, and Vernon Wells are all examples of guys who ranked among the major league flyball leaders in 2011. While each of those guys has put up allstar caliber numbers in the past, they have all seen more than their share of crappy seasons due to very low BABIP's.

Lucho's 6% walk rate leaves a lot of room for improvement. The lack of patience is downright frustrating, because he has all of the tools to get on base more. Consistently low strikeout totals indicate he's never let the zone "get away from him," which is a good indicator. He "tracks" breaking balls well, making contact with just about anything, though for him this seems like a different skill than "recognizing" pitches because he'll go ahead and chase out of the zone regardless of the offering. His supremely good hand-eye coordination means he puts the ball in play early and often, when instead it could help him to foul off pitchers' pitches and work deeper counts. You can check out him expanding the strikezone more here, though the AB ends better for him than it should have due to a two-strike mistake pitch.

I've hemmed and hawed over Jimenez' limitations above because there are some valid reasons why he doesn't attract more national attention (along with a couple of stupid reasons), but here's my bottom line: he contributes in a lot of different ways, and while he doesn't have that one plus plus tool like a Bourjos or a Trumbo, he has a variety of solid to above average baseball skills and an outstanding feel for the game. He's charismatic and plays with big league swagger. I think he sneaks up on everyone and carves out a role for himself in the majors, though I'm not sure what that role will look like.