Please note that the rankings below DO NOT comprise a traditional "best prospect" list. I simply ranked players according to their 2011 Wins Above Replacement ("WAR"), which provides a rough estimate of total contributions to their respective teams.

Our 2010 second rounder's final stat line looks more or less like we'd hoped for coming into the season: he K'd more than a batter an inning and induced loads of GB's at a 65% rate. On the other hand, he struggled with his command and control, posting a meh 4.3 BB/per nine. Hopefully that's just a statistical hiccup, because years of flameouts and mediocrity in the Angels' pen have underscored the importance of relievers who throw strikes. His stint as a starter was not considered a success, though the Halos' might try to return him to the rotation in the coming years if his command, slider and change-up get more consistent. In the meantime, he profiles as a middle innings power arm with set-up man upside.

This guy is a sleeper. The Halos scooped him up in the 28th round of the 2011 draft out of West Florida College, which may make him another Kotchman find; but it's easy to credit Kotch with all good things Florida, and another Angels' scout shares the sunshine state with him, so who knows who deserves the credit. At any rate, Vargas-Vila put up great numbers for a late round pick. While not huge for a righty at 6'1", 205 lbs, he does generate pretty good angle to the plate by staying on top of his pitches with funky mechanics. Here's what I mean: 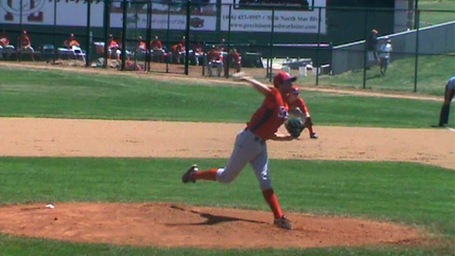 Shot by yours truly

By planting firmly on his front foot and pole-vaulting over the locked leg, he attains a release point that is both high (despite his three quarters arm slot) and closer to home than his size would otherwise allow, creating angle to the plate... But check out his back leg, which pushes off early in the delivery and loses contact with the rubber well before he releases the ball. Two questions come to mind: for how long will umps consider this legal? And, even if it is allowed, will the delivery effect his future command?

Vargas-Vila won't show up on any top prospects lists later this offseason, so here's the rest of the scouting report: he has the classic four pitch mix, and can throw each one of those for strikes. The day I saw him, he was sitting at 87-90 with his FB, though Kotchman later told me that he touches 93 at times. Despite the ho-hum velocity, Vargas-Vila's angle and command kept hitters from squaring the heater up. His slider and change were perhaps better pitches, both averaging in the low 80's. Because his slider has tight spin and short break, the two offerings were difficult to distinguish from one another, but they did the job, knocking hitters off kilter and keeping them off the fastball. Every once in awhile, Vargas-Vila would mix in a slow curveball, but it came out of his hand at a different plane and arm speed than his fastball, so was fairly easy to pick up. At this point, the hook looks more like a show-me pitch than anything else. While he didn't appear to overpower anyone, Vargas-Vila worked deftly and efficiently through the Great Falls line-up and still racked up five K's vs no BB's in five innings of work. He was nails in the post season, throwing seven innings of one-hit ball while fanning nine and walking zero in his single start. He doesn't offer much in the way of projection, but this is a guy who just might sneak up on us.

The good: Toribio anchored the wildly successful, champion DSL Angels both at the plate and in the field, posting team highs in total bases, extra base hits and OPS while splitting time between second base and shortstop. He also swiped 32 bags at an 89% success rate. The bad: at 21, he's over the hill for a league where many prospects are still just sixteen or seventeen. Before Toribio there was Waskal Adames, another up-the-middle player who served a similar anchor role on DSL Angels' squads from 2007 to 2010, yet never made it stateside and ultimately disappeared from the roster. While I hope Toribio gets a crack at US baseball next year, I think it's all too likely he'll go the route of Adames.