As I mentioned a few times, I attended the Baseball Winter Meetings in Dallas, TX this year for the Professional Baseball Employment Opportunities (PBEO) Job Fair. 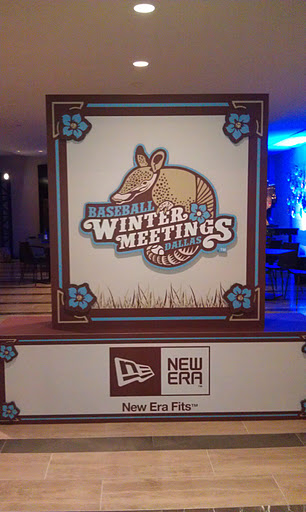 please excuse my photos as they are from a cell phone.

After flying in on Saturday night in the pounding rain, I ventured over to the Hilton Anatole. We were not allowed to stay at the Hilton, however for $70 /night we could stay across the street (building corner on right). 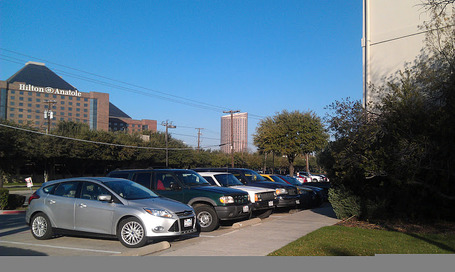 There was noting scheduled for Saturday night, so I found people watching football in the lounge with people from places like Penn State, USC, etc.

Sunday was the "unofficial" start date of the Job Fair, the Business of Baseball workshop where we heard from many speakers like Pat O'Conner (President of Minor League Baseball, MiLB), the President of Baseball America, numerous General Managers, GM (both males and females) who pretty much said get ready for low pay and long hours. As an intern, the entry level job in MiLB, you'd get lucky to get $1k/month for a nine month job (January until end of the season). Employees work near 100 hour weeks, imagine coming in at 9:00 a.m. and leaving near 11 p.m., after the game, with only your hour lunch break, and maybe 10 minutes during the game to quickly eat (many teams provide dinner on home games). They mentioned if you have a Sports Business degree, they don't care, they'd rather have something in business, because everyone SELLS (even their play by play guys)! And frankly, it doesn't matter if you have a business degree, I know someone who has an Environmental Science degree and he is the Assistant GM of a team. 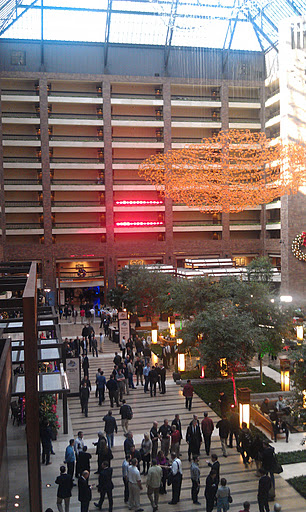 only one area of the hotel, it is HUGE

Monday was the start of both the MLB and MiLB winter meetings and job fair. During the job fair, jobs are posted every 30 minutes with a job number. Now taking your resume, you write the job number and team name, and drop it off in a box. Volunteers then placed the resumes in team's mailboxes to be picked up later. Once a team has decided whom they want to interview, they either called you or put in on a piece of paper that was also posted every 30 minutes (by job number). Subsequent interviews were dealt in the same way. This was all done in a giant ballroom, with each section divided out, one to work, job postings, interview postings, and the interview area (seen below). That was how most people spent their time Monday through Wednesday. 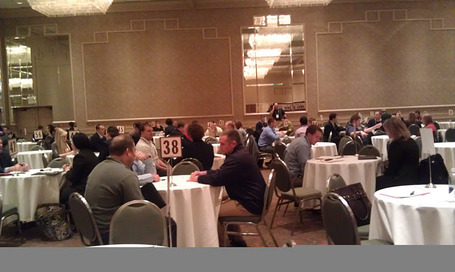 At night however was a different story. The rumors that you hear are in fact true. It is a giant booze fest, with ballpark prices even ($6.25 for a Miller Lite aluminum bottle)! You will see many "big wigs" like Scioscia and Leyland below, Dusty Baker in the hotel bar, etc. Everyone is networking, the job seekers, those in MiLB, and MLB. In the Business of Baseball workshop mentioned earlier, someone told of a time a few years ago, when Brian Cashman said "nice (Red Sox) hat" and they struck up a conversation about David Wells. What does Cashman do, pulls out his phone and lets the guy talk to him (well, the voice mail), needless to say they were all pretty drunk. 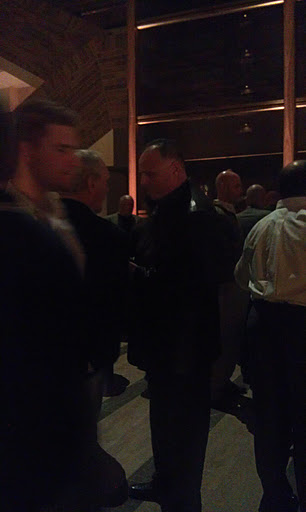 Even during the day, you run into GMs and Managers (Ruben Amaro Jr and Charlie Manuel below) giving updates, mingling, or getting coffee (how I met Charlie Manuel during breakfast). Or you will see guys from MLB Network, SiriusXM, ESPN, SUNY, NESN running around. There were a lot of Japanese media and some even had a small booklet of a "who's who" with picture and name. You might even run into a player, I saw Clayton Kershaw. 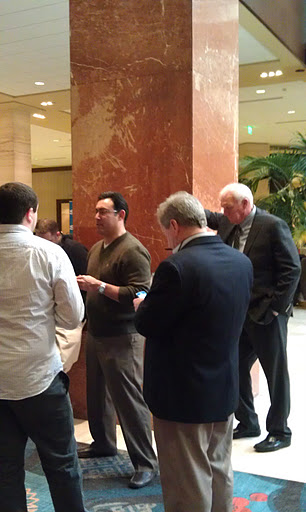 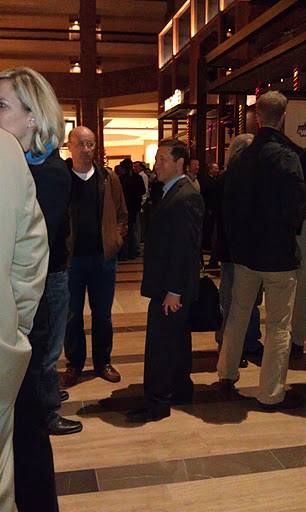 And there is the trade show! Two ballrooms filled to the gills who vendors selling the newest product or service. Obviously the food stations were the biggest hits like Dippn Dots, hot dogs, etc. Giveaway items, the folks from SABR, selling jerseys, grass, ticket services, LEDs, becoming lean (business) in baseball, etc. The hit from last year was back, beer that fills from the bottom of the cup. 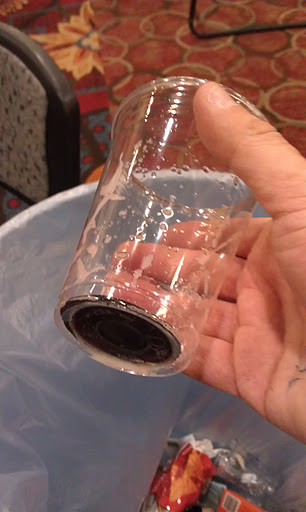 What happens is a magnet on the bottom of the cup is lifted by the device and fills it with beer, when you take it off, the magnet sticks. This means less foam.

Unfortunately I was not in Dallas when The Machine and CJ were announced, I was actually stuck in a St. Louis airport a mere hours beforehand, waiting to get home.

And this will probably be my last post/shot/comment for a while, I have accepted a job with a MLB team. I will answer to things on this post if you have any questions about the Winter Meetings or working in baseball (two years of experience). However it is not like Angels Aviator (so no scouting), and it is not with the Angels (as I have previously mentioned).