The first day of the rest of your Angel life edition of Halolinks:

Old joke is old: Have The Angels Passed The Rangers In A.L. West? - Baseball Nation. "But the Rangers just lost their best starting pitcher, C.J. Wilson ... who joined the Orange County Angels, last season's second-place team." When will Rob "Don't Call Me Bob" Neyer figure out the Angels' name joke is dead?

Bad headline of the day: Angels can't wait to play with Albert Pujols, C.J. Wilson - angels.com: News. "Angels players were stunned -- as well as ecstatic -- about the news that Albert Pujols and C.J. Wilson are the newest members of their team." Ha! He said "member".

I haven't heard anything about Morales getting non-tendered, but it's mentioned in this post: The new Angels lineup - HardballTalk. "I’m excluding Kendrys Morales, who will likely be non-tendered, and Mike Trout, who figures to begin the season in Triple-A."

We have video (even if it is just Craig Calcaterrra):

Visit msnbc.com for breaking news, world news, and news about the economy

Looks like someone is stinging from 2002: Arte's Angels usher in bold new era - angels.com. ""They talk a lot about the Yankees," Reds manager Dusty Baker said from his home in the Sacramento, Calif., area, "and now the Angels, looking at what they've done over the last six, seven years, are kind of like the Yankees of the West." I'll accept that, with the caveat, "All the cash, without the rash".

I'm no lawyer (and I've never played one on TV), but this seems like an odd ruling: Dodgers can sell TV rights, judge rules - latimes.com. "The Dodgers' current TV contract with Fox prevents the team from negotiating with another broadcast outlet before Nov. 30, 2012. Fox failed to convince Gross that moving that date up would alter the contract so as to constitute irreparable harm." Maybe it has something to do with protecting the creditors (as stated in the article).

Dodger James Loney arrested after collision on 101 in his Maserati - latimes.com. "The accident took place Nov. 14". No to make light of a serious offense, but one comment was, "at least Loney finally hit something". Whenever I hear or read the word "Maserati", I'm reminded of Ted Nugent's "Wango Tango"...a Mazerati, a Mazerati. And it's a fast one too!"

Trade rumor! Oakland A's face daunting task in AL West after Los Angeles Angels' blockbuster signing of Albert Pujols and C.J. Wilson - FOX Sports on MSN
There was also speculation that A's closer Andrew Bailey could be dealt to the Angels for a package that includes first baseman Mark Trumbo. But Angels GM Jerry DiPoto said he considers Trumbo an option at DH, third base or the outfield, suggesting he's not eager to part with him.

Uh-oh: K-Rod Accepts Arbitration With Brewers - FanGraphs Baseball. "He accepted the Brewers’ offer of arbitration and will receive a salary somewhere just south of $13.5M — the amount he made in 2011 with the Mets and Brewers — and serve as the set-up man for John Axford."

I got an email from this guy about this: 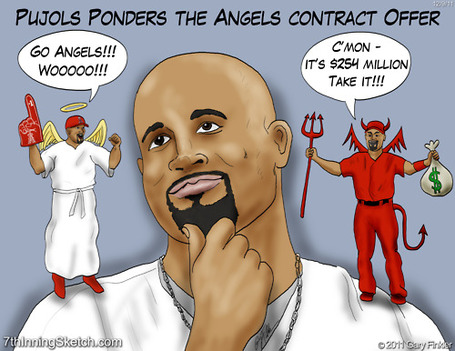