Share All sharing options for: Angels Fan Fest A Winner

The highlight of Sunday's preseason Angels win over the Padres was Mark Trumbo hitting a 3-run blast to dead Centerfield and Dan Haren dominating in his 70+ pitch effort. But the game might have taken a close second place in the hearts of Angels fans who were treated to a FanFest to remember.

Ah yes, the familiar stadium and the Big A surrounded by empty parking lot.

A closer look reveals some new faces in the front windows: Torii Hunter (been there before), Dan Haren, Vernon Wells (Tony Reagins works here), Jered Weaver. Covered by the helmets in this view are windows on either side that celebrate the 50th anniversary. It is tough to go ten feet in the stadium and not hear about the fiftieth anniversary of team. 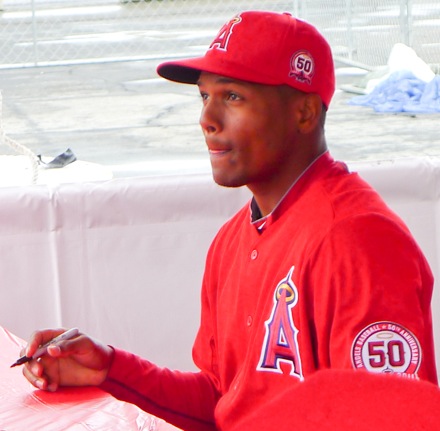 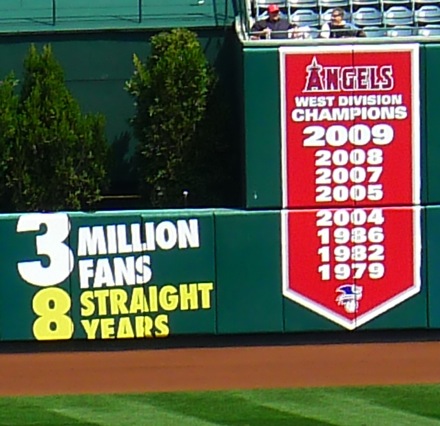 New signage in Centerfield on the left celebrates the Arte-era drawing power of the team, while if you have to make a bet, bet that the Division title banner on the right there might be gone by opening day. 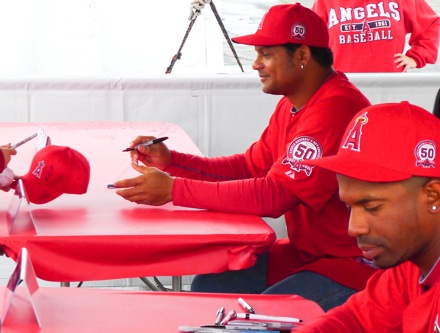 Bobby Abreu seriously smiles all the time. Alberto Callaspo is caught in a pensive moment deciding which sharpie is best for the occasion. Players were asked to sign a wide variety of merchandise and body parts. They all kind of become chemistry experts on avoiding smudges, smears and typos.

I kept trying to sneak into fan fest through one of these doors and kept thinking "Man, this team stinks!" 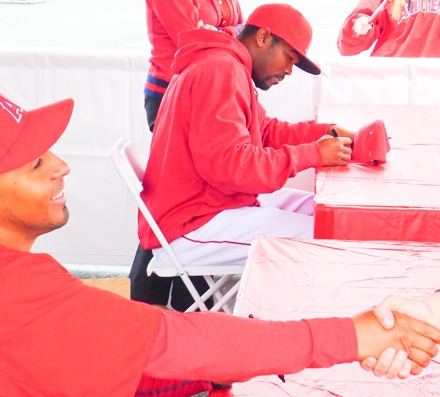 While Howie Kendrick signed autographs, Maicer Izturis sang a duet of Michael Jackson's "Black Or White" with a fan. 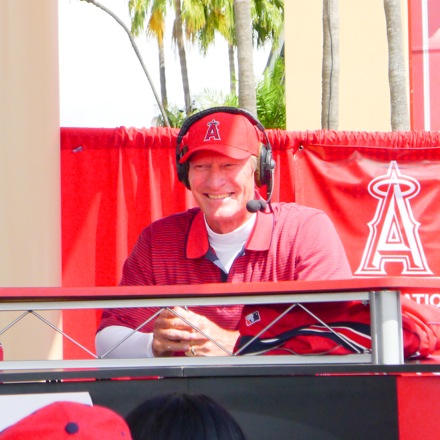 Angels alum Bobby Grich did a stint on the stadium stage with AM-830 pseudopersonality Rodger Lodge who is not pictured here becuase he was wearing a court-jester like ski cap that made him look less ridiculous than he normally does just wearing street clothes with that "didn't shower again" appearance of his. Weird Trivia: Lodge is married to Grich's ex-wife. 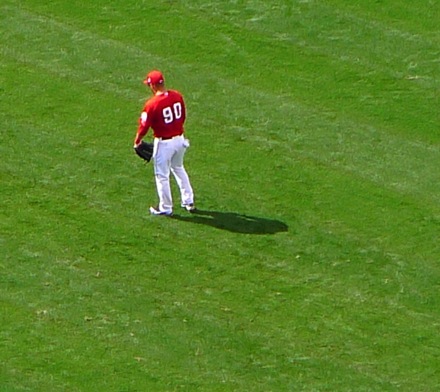 Angels prospect Mike Trout played his second ever exhibition game at Angel Stadium of Anaheim on Sunday. The first was last season's "Futures" Game. Sunday was the first ever time Trout took the home field in front of fans wearing his Angels uniform.