Forget the phony theater, GA did retire an Angel - The Orange County Register
So save the one-day contracts for players who need to draw more attention to themselves. Anderson signed with the Angels once — and resigned with them repeatedly. To write his name for a photo op now would be the sort of glossiness Anderson never desired.

It almost hurts to type this, but...OC Register's Jeff Miller is exactly right. At least this time.

Angels spring report: Rangers defeat Angels, 10-6 - latimes.com
Rangers 10, Angels 6 AT THE PLATE: Third baseman Maicer Izturis had a double and a home run, driving in three runs. Catcher Jeff Mathis, the only other starter to make the trip, had a single, a stolen base, a run batted in and a run scored. The Angels banged out 12 hits and stole three more bases, giving them 10 in 12 attempts this spring.

Do you think the Angels were trying to make a statement by stealing 3 bases off of Napoli, or were they just working on a few things?


MORE LINKS AFTER THE BREAK...

Angels' Scioscia is a purposeful prankster - Yahoo! Sports
"It’s a show every morning," outfielder Torii Hunter(notes) said. "Guys are falling on the floor laughing. Not everybody can take over a room. You can tell Mike Scioscia has it in him. He has the character of a comedian." Ron Roenicke, a key member of Scioscia’s coaching staff for 11 years before becoming manager of the Milwaukee Brewers this season, says his former boss is "the funniest man in baseball."

Very good article about the Angels skipper. I find it hard to imagine this side of Scioscia after only seeing his on-field persona for so long, but perhaps this is one of the reason for his success. His ability to keep a clubhouse of millionaire egomaniacs loose, and not taking themselves so seriously, probably goes a long way in keeping good "team chemistry". If there is such a thing. 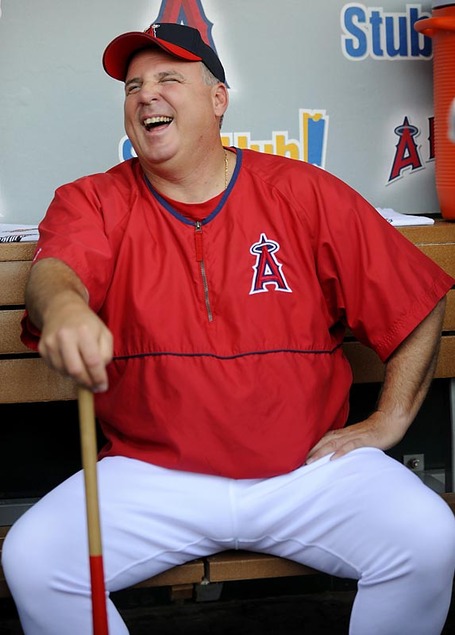 Rangers catcher Mike Napoli faces Angels in first start vs. old team - texasrangers.com
"I hold a high regard for his catching abilities," Washington said. "Not just because he is here. I watched him handle that pitching staff for four years and I was impressed. Mathis is as good as it gets in the way he blocks and calls a game. Mike is the same way. [Angels manager] Mike Scioscia was a catcher and he always has good catchers behind the plate because he takes time to work with them.""The knowledge he (Scioscia) has for the game is unbelievable," Napoli said. "I mean, it was tough sometimes from him being a catcher. He can really get on you. If you can't take it, he's tough to play for. You've got to have thick skin and you can't take it personally. He is trying to get the best out of his players."

Mike Napoli, and the father who wouldn't love him.

Angels third baseman Brandon Wood confident in new swing - angels.com
Wood pounded AFL pitching, restoring a measure of confidence, and delivered on his promises to his new bride. But he didn't review video of his stroke or revisit 2010 in any form. He labored in the gym and found what he feels was missing in his swing, putting into action his own thoughts and those of a few others. "I tried [last season] to hit like 15 or 20 different people in six months," Wood said. "It's pretty hard to develop the confidence I need doing that.

At first I was ready to go off on Lyle Spencer again for writing another puff-piece about the Angels. I seem to remember reading somewhere that Wood had had a miserable fall season in Arizona, so when Spencer stated "Wood pounded AFL pitching", I assumed Spencer was at it again. But no, Spencer was right...sort of: Winter Leagues: Arizona Fall League: Statistics. Wood did bat .341/.385/.489 in Arizona, but he struck out in 18% of his at-bats. The 18% is better than his career average, but not something you'd like to see a 25 year-old with major league experience do against basically Single A pitching. Also, Wood's average might be explained by his high BABIP, which was a huge .394. I still hope for the best for B-Wood, for some reason he's one of my favorite players, but I'm not going to get too excited just yet.

Divide and Conquer, AL West: The Weakest Links - Baseball Prospectus
Given the performance precedent he set during happier times, one would imagine the Halos will at least give Kazmir enough leash in 2011 to ascertain whether those changes yielded any observable improvement, and whether there’s anything left to be salvaged. If not, the mountain becomes tougher to climb for the Angels, with left-handed insurance policy Hisanori Takahashi presumably being burned to replace Kazmir.

I'm not too sure I agree with this. If the Angels were counting on Kazmir to fill the 3rd or 4th spot in the rotation, then sure, he's pretty risky and is probably the weakest link. However, Kaz is slated to be the Halo's 5th starter, typically not someone who's counted on to carry the staff, so if he fails, the impact isn't something that's going to sink the club. I'm more concerned with the Angels corner infield spots. If Kendry Morales doesn't heal and Maicer Izturis can't stay healthy, those two positions get really thin.

Spinning Yarn: How Accurate is PitchTrax? - Baseball Prospectus
Who was right—the umpire or the machine?

Everything you always wanted to know about PitchTrax and PitchFX.

The Angel game will be re-broadcast tonight on the MLB Network in case you missed it live. SUBJECT TO BLACKOUT...bastards.

redleaf Strike Out Thirst Sweepstakes
I don't usually pimp products here, and I'm not really doing it this time since I've never had this redleaf stuff, but I thought the contest was pretty cool. If you feel like making an ass of yourself in front of 3000 or so fans by bouncing the first pitch halfway to home plate (like I assume I'd do), then click the link and enter the contest.

U Of Memphis Dance Team Member Goes Apeshit After Winning National Championship - Deadspin.com
When the results were announced, they were excited.

I don't know which is funnier, the way this girl reacts or the giggling of the dorks who are making the video. Either way, it's pretty funny.

March 3 - BR Bullpen
Events, births and deaths that occurred on March 3.
1932 - In Century, Florida, Boston Red Sox pitcher Ed Morris, dies at age 32 of knife wounds inflicted in a fight at a party given in his honor two days ago in Brewton, Alabama. Boston owner Bob Quinn is reported to have had a New York Yankees offer of almost $100,000 for the pitcher. The story is, Ed Morris had tossed Don Zimmer to the ground during a bench-clearing brawl at Fenway. Apparently, a pissed off Karim Garcia shanked Morris in retaliation. MFY.
1988 - Los Angeles Dodgers star Kirk Gibson walks out of training camp after teammate Jesse Orosco plays a practical joke by placing "eyeblack" in his cap. The incident illustrates Gibson's intensity and no-nonsense approach to the game. Gibson, who returns to camp the next day, will be the National League MVP and help the Dodgers win the World Series this season. MF Jesse Orosco
1999 - Houston Astros outfielder Moises Alou undergoes surgery to repair ligaments in his left knee. He will be out for 5 to 6 months. Alou was injured when he fell while trying to adjust the speed of his treadmill while in the Dominican Republic. MF treadmills.
2010:The Dodgers sign veteran OF Garret Anderson to a one-year contract. Anderson played for Atlanta in 2009 after 15 seasons spent with the Angels. If he makes the team, it will likely be as a pinch-hitter.
Happy b-day:
1886 - Pop Kitchens, minor league catcher/manager (d. 1965)