Angels notes: Dan Haren gets big results in spring game - latimes.com
Haren said he threw all five pitches in his repertoire but was especially happy with how his curveball was working. "It was kind of a lost pitch for me at the end of last year," he said. "It's really come along this spring. It seems a little bit tighter.

Although the timing of my opinion about the Angels pitching staff may be poor considering that staff surrendered a 10-run lead and eventually lost to Cubs 14-13, I still think this season is going to be fun to watch mainly because of how good I think the Halo pitching is going to be. Haren says he threw all five pitches, but I'm not too sure which 5 pitches Haren is referring to. After a quick check of pitchfx data over at FanGraphs, Haren hasn't thrown 5 different pitches in a season since 2007, dropping his change-up from his repertoire after rarely throwing it the previous 5 seasons. Has he started throwing a new pitch or is he incorporating his change-up back into his arsenal? The last season in which he threw five pitches was also arguably his best. Also, don't you just love it when things get a little bit tighter?

Ten upcoming managerial milestones in 2011 - The Hardball Times
Several managers should break the 1,000 win barrier this year. It's not nearly as prestigious as the 1,500 win club, but it's still a nice marker that only 55 skippers have ever achieved. This year Scioscia (980) and Terry Francona (939) should get there.

The author, Chris Jaffe, emailed me to let me know his article was posted and wanted to be sure I had seen how well Scioscia ranked in his data. "One item deals with Mike Scioscia, noting not only that this year he'll win his 1,000th game, but also giving a list of what the career W-L records were for the other managers when they notched their 1,000th win in the last 50 years. (Yes, sadly, I really did take the time to figure that out). It helps to see how Scioscia compares. Turns out he's doing incredibly well, even by the standards of the best managers of the last 50 years." Some of us here at HH frequently question Scioscia's methods (me for instance), but it's hard to argue with his success. Especially on the historical level.

Ervin Santana's Inside Pitch - The Baseball Analysts
It is particularly interesting to see the outlier pitchers: Derek Lowe has the lowest (ha) pitches, and Livan Hernandez pitches the farthest away to both left-handed and right-handed batters. And without being presented the data I would never have guessed that Ervin Santana throws the farthest inside to left-handed batters of any pitcher. With most pitchers throwing extremely away to lefties I wanted to see what was going on with Santana.

An interesting article about Santana and his pitch selection. Apparently he's the biggest badass who's willing to go all Bob Gibson on left-handed hitters.

Mike Port? I remember that guy! Anyway, I wonder if the above had anything to do with the following...

Players, umpire unions hold meeting to discuss missed calls - SI.com
"We had a productive exchange about a range of issues of concern to players, umpires and the commissioner's office," union head Michael Weiner said. 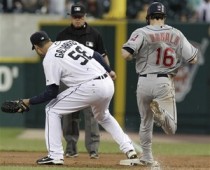 Oh. Yeah, but that was just one. And it had nothing to do with the Angels, so who cares... 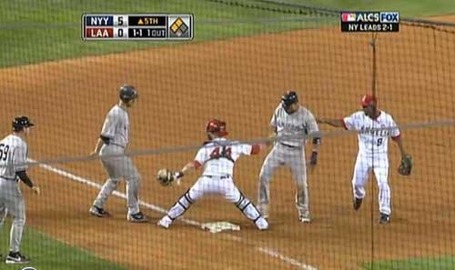 'Rock star' clocked at 101 mph in Japan tries out for Giants - USATODAY.com
"So, when I got that save the other day,'' Kroon says, "I told Bochy (now the Giants manager), 'It took only 16 years, and I went halfway across the world, but here's your save.' '' Kroon spent the last six years in Japan, saving 177 games, setting records with his fastballs and becoming a cult hero.

Easton-Bell Sports unveils pitcher's helmet - CBSSports.com
"With our pitching helmet prototype, we have redefined what is possible and launched a new era of protection for baseball pitchers," Easton-Bell Sports CEO Paul Harrington said in a statement. 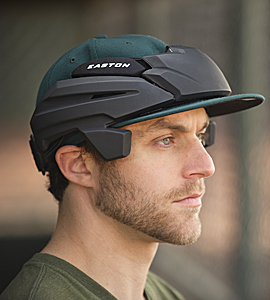 I might get one of these just to wear around the house.

March 8 - BR Bullpen
Events, births and deaths that occurred on March 8.
1930 - Babe Ruth signs a two-year contract for $160,000 with the New York Yankees. At $80,000 per year, he becomes the highest-paid player of all time. How much would Babe Ruth earn if he were in his prime today? $30M? $40M?
1999 - Hall of Fame center fielder Joe DiMaggio dies of a lung cancer at age 84. Born in Martinez, California, DiMaggio arrived in the major leagues at the age of 21. He batted .323 in his first season and helped the New York Yankees to the 1936 World Championship. His rookie performance served as an indicator of future success, both for him and the Yankees. During his 13-year career, DiMaggio participated in 10 World Series, with his team winning the Championship nine times. In 1941, DiMaggio achieved his most famous milestone when he compiled a major league record 56-game hitting streak. I find it amazing that DiMaggio only missed playing in the World Sries three times in his entire career.
Happy b-day:
1939 - Jim Bouton, pitcher; All-Star
1942 - Dick Allen, infielder; All-Star