Here are three MLB Power Rankings, Power rankings - USATODAY.com, BtB Power Rankings, and BP's Power Rankings - CBSSports.com. Each of these sites have the Texas Rangers ranked #1 and all had the Boston Red Sox at the top of their rankings heading into the season. Now, each have the Red Sox ranked 13th, 12th, and 24th. As a fan, which ranking do you feel more strongly about; division rival Rangers' #1 ranking, or the big drop for the Sox? See, you can be the optimist and say, "Ha-ha Red Sox. At least the Angels aren't the only ones struggling." Or you can be pessimistic and see this as, "Holy crap, the Rangers are going to be hard to beat."

Or, you can be a realist and say, "Who gives a crap about power rankings."

Good news for those of you manning the Kendrys Morales watch. According to Mark Saxon: Morales gets a little closer and other notes - ESPN Los Angeles. Within this post, Mike Scioscia says Morales is "feeling terrific" and he plans on running in the next day or so. Here's the whole blurb:

For just the second time since he reported to spring training nearly two months ago, Morales will test his left ankle by attempting to run on it. Manager Mike Scioscia said Morales has been feeling "terrific" lately and that he should be running in the next "day or so." If Morales can run without pain, he could begin a minor-league rehabilitation start, his final hurdle before he joins the Angels. The Angels are targeting early May for Morales' return.

Early May? Four weeks? I remember when they were saying he'd be ready for the start of the season.

Nick Johnson, Bust? - Beyond the Box Score
Generally, the term bust is understood to mean failure, but that just leads a subjective standard that is relative to the player in question. Aren't there degrees of failure? Certainly, the failures of Brandon Wood and Andy Marte are easy to identify.

Brandon Wood, certified Bust. Obviously I'm still hoping he's not, but I'm almost ready to throw in the towel on my support.

Wells’ hitting troubles continue - The Orange County Register
He entered Monday's game 4 for 40. He went 4 for 40 during a stretch of June 2010. And in May 2009. And in July 2004. There are probably other times, too, but nobody notices a 4 for 40 in the middle of the season, when those bad at-bats can hide in the mass of statistics that accumulate over 162 games. But everybody has noticed Wells' slow start this season.

Sam is right, if Wells had this 4 for 40 streak at any other time other than the beginning of the season, no one would be making such a big deal about Wells' current failures.

Prospect of the Day: Tyler Chatwood - Minor League Ball
The results were rough: five innings, four runs, four walks, four hits, with two homers allowed. Is this representative of his future? What you saw in the first start looks to me like a combination of rookie jitters and lack of Triple-A experience. 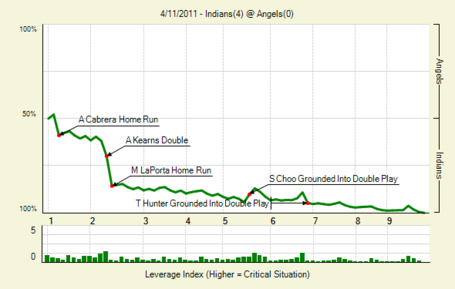 Pirates employee found dead near stadium - USATODAY.com
One week after a Giants fan was badly beaten up in the Dodger Stadium parking lot, a Pirates usher was found dead Saturday morning near their stadium. Michael Schacht, 58, was found dead on the street 1 1/2-miles from PNC Park, where he had worked Friday night's 14-inning game that ended at 12:17 Saturday morning.

I feel terrible about this guy ending up dead, but this post is ridiculous. This most likely has nothing in common with what happened at Dodger Stadium. To link this to the fan beating is a stretch when it looks more like a robbery and nothing baseball related. Here's more from the post:

He was lying face down, unresponsive and bleeding from the head, Pittsburgh police Sgt. Ronald Griffin told the Pittsburgh Tribune-Review. His car, a silver 2002 Hyundai Sonata, and his identification were missing, Griffin said.

Police are calling his death suspicious.

"Police are calling his death suspicious." Ya think?

April 12 - BR Bullpen
Events, births and deaths that occurred on April 12.
1966 - At the Astrodome, the Houston Astros and Los Angeles Dodgers play the MLB first game on synthetic grass. Thanks to the Monsanto chemical company, who proposed using an experimental playing surface of nylon grass, the plan to play on an all-dirt field, necessitated by the need to paint the dome's glass panes to reduce the glare which prevented natural grass from growing, is alleviated by the use of AstroTurf.
1980 - After eight years with the California Angels, Nolan Ryan makes his debut with the Houston Astros. Ryan, who did not come to bat the previous seven seasons, hits a 3-run homer in the 4th inning. The Astros lose to the Dodgers in 17 innings, 6 - 5.