Share All sharing options for: Angels Announce Gname The Gnome

The Angels are at .500 after ten games. Vernon Wells is batting .091 and Alberto Callaspo is the big bopper in the lineup. But life must go on in the world of awesome fan giveaway promotions.

The Angels announced today an online contest to "Gname the Gnome." The contest gives fans an opportunity to name the much anticipated gnome bobblehead that will be given to all fans when the Angels face the Texas Rangers on Thursday, August 18 at 7:05 p.m. The online contest is open to all fans with a creative interest. 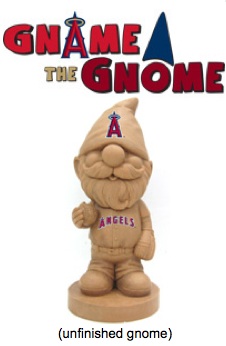 The winner with the most unique and Angels related name will receive four field box game tickets to the August 18 game, a parking pass, online and in-game recognition, and four autographed baseballs. All entries must be under 12 characters in length and submitted by April 26, 2011.

To participate, fans can enter at angels.com/gnome. The winner will be announced online the week of May 2.