I really enjoyed watching last night's game. Slugfests are usually my preferred choice when looking for a game that has excitement and action, but Haren's one-hitter was so dominant, so interesting that it was easily one of my favorite Angels games in the last couple years. Watching the way he mixed his pitches, the command of the strike zone and the way he set up each hitter was amazing. Mark Saxon makes a good point in his latest post, Dan Haren and the lost art of self-sufficiency - ESPN Los Angeles:

Gibson and Ryan might have nodded with approval watching what Haren did Tuesday night in a 2-0 Angels win over the Cleveland Indians. In an era of pitchers babied because of six- and seven-man bullpens and coddled to protect multi-million-dollar investments, Haren looked as strong in the ninth inning as he had in the first, mowing down the Indians in a 1-2-3 ninth to complete the 17th one-hitter in Angels history. The Angels are seeing an interesting chemistry develop between Haren and Jered Weaver, who seem to be pushing each other along in the first couple of weeks. Both pitchers have won every game they’ve pitched, including Haren in his one relief appearance in the past eight seasons, during Saturday night’s 14-inning marathon.

Except for the mistake he makes regarding how both pitchers have won every game they've pitched (the Angels lost Haren's first start in Kansas City, Haren got a no-decision), I agree with Saxon's take on comparing Haren's game to throwback pitchers Gibson and Ryan.

In this post, Dan Heren throws one-hitter as Los Angeles Angels end Cleveland Indians' eight-game win streak - FOX Sports, I found an interesting tidbit regarding the Angels' home run timing, "In the seventh, Trumbo hit a drive just inside the left-field pole for his first big league home run. All but one of the Angels' 14 homers this season have come with the bases empty." Wasn't that the biggest complaint about Mike Napoli?

Following Haren's gem might be a tough act to follow for Ervin Santana, especially after reading this (Indians-Angels Preview - FOX Sports), "Santana looks for his first career victory over Cleveland on Wednesday night when the Angels close out their six-game homestand." In his career, Santana has gone 0-6 with a 5.14 ERA in nine starts against Cleveland. Something else that might be tough for Santana to overcome is the Angel offense...or I should say, the lack of the Angels offense at home, "Los Angeles, 28th in the majors last season with 3.9 runs per game at home, is averaging 2.6 runs on its current stretch in Anaheim." Fortunately the club has managed to win 3 of their 5 games at home this season.

I lost a little respect for Josh Hamilton after reading his remarks after yesterday's game (Josh Hamilton out 6-8 weeks with fracture - ESPN Dallas):

Hamilton wasn't happy and called the play "stupid." Hamilton was tagged out by catcher Victor Martinez, who got back just in time to make the play. "I listened to my third-base coach," Hamilton said. "That’s a little too aggressive. The whole time I was watching the play I was listening. [He said],'Nobody’s at home, nobody’s at home.’ I was like, ‘Dude, I don’t want to do this. Something’s going to happen.’ But I listened to my coach. And how to you avoid a tag the best, by going in headfirst and get out of the way and get in there. That’s what I did."

Basically, he's throwing Ranger third-base coach Dave Anderson under the bus by placing the blame for the play on Anderson. I wonder if Hamilton had been safe on the play if he'd still be mentioning Anderson's name in the play? If he had scored, most writers would be saying how it was a heads-up play on Hamilton's part. Would Hamilton be giving credit to his coach? Fortunately Rangers' GM Jon Daniels is seeing this correctly:

"I have absolutely no issue with Dave sending him," Daniels said. "We play an aggressive style of baseball. We run, we take the extra base. The chances of getting hurt on that play are minimal. I've encouraged Dave to keep being aggressive." Anderson noticed the pitcher wasn't covering home plate on a pop up in foul territory by Adrian Beltre and told Hamilton to go.

Vernon Wells's Wheelhouse - Baseball Analytics Blog
The slump may be less what Vernon is doing wrong than what the opposing pitchers are doing right.

There are a couple graphs in the above post that show Wells' heat-zone. Kinda cool. 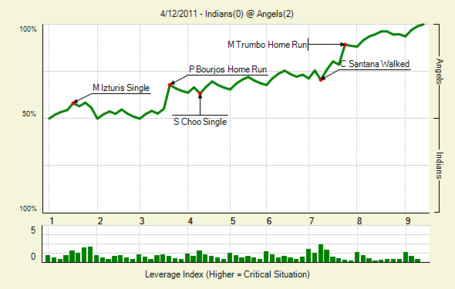 Injured Morales takes next step - The Orange County Register
Kendrys Morales ran on grass in spikes Tuesday for the first time in nearly a month as he continues a slow recovery from a broken ankle. "First, baby steps, and hopefully they'll improve as the week goes on," Angels manager Mike Scioscia said. Morales still wasn't running at 100 percent effort during his sprints Tuesday, but the workouts will get more intense if he responds well. He is not expected to go back to running on a treadmill.

When is he going to get here?? This is taking FOREVER!

Trout's slam, five RBIs pace Travs - The Official Site of Minor League Baseball
Mike Trout, ranked by MLB.com as the No. 1 prospect in baseball, enjoyed the best game of his young career Tuesday afternoon as his visiting Arkansas Travelers cruised to a 9-4 win over the Double-A Frisco RoughRiders. The 19-year-old center fielder homered twice, including a grand slam, en route to a three-hit, five-RBI day. It was both the first grand slam and multi-homer game of Trout's career, and the five RBIs were a personal best as well.

Friend describes how fan Bryan Stow was attacked at Dodgers Stadium - ESPN Los Angeles
"Honestly, I didn't want to get too detailed, but I think everybody should know that he was unconscious before he ever hit the ground."

And then this guy pipes in:

Unreal: ‘Columnist’ pulls no punches in piece on injured Giants fan - Yahoo! Sports
But then a link started zipping its way through Twitter, Facebook and the rest of the natural sports blogosphere. And somehow Mark "Congratulations, Jaycee" Whicker actually had a competitor for the most brutally insensitive sports column you've ever read.

I think it's kinda funny (in a sad way) how Mark Whicker has achieved national prominence in the "Dumbass Writes A Stupid Column" category.

April 13 - BR Bullpen
1954 - Hank Aaron makes his major league debut in left field for the Milwaukee Braves and goes 0 for 5 in a 9 - 8 loss to the Cincinnati Redlegs.
1963 - After eleven hitless at-bats, Cincinnati Reds second baseman Pete Rose records his first major league hit, a triple off the Pittsburgh Pirates' Bob Friend.
1972 - The first player strike in MLB history ends, with an abbreviated schedule to start two days later.
1984 - Pete Rose of the Montreal Expos gets his 4,000th hit, a double off Philadelphia Phillies pitcher Jerry Koosman, to join Ty Cobb as the only major leaguers to reach 4,000 career hits. The hit comes exactly 21 years after Rose delivered his first hit.