Will Scott Kazmir Return? Have Lunch With Torii Hunter. Halolinks.

Share All sharing options for: Will Scott Kazmir Return? Have Lunch With Torii Hunter.  Halolinks.

Anyone else think the Scott Kazmir situation is strange? I'm not talking about his lousy pitching, but rather how the Angels are treating him. It's almost as if they're saying, "Go ahead and do whatever you want. Give us a call when you think you're ready to pitch." So Kazmir took a couple weeks off, went home and watched some videos..."Roadhouse", Sleepless in Seattle", and "When I Used To Be Awesome". Okay, I don't know about the first two, but he did re-live his past glory on the mound by watching himself pitch when he knew how to get guys out. In this post from the OCR (Angels’ Kazmir reclamation project returns to Arizona - The Orange County Register), there was this bit, "Butcher said he talked with Kazmir Monday about the plan going forward and didn't really discuss what Kazmir had done in Houston." Really? A pitcher who the team has invested over $12M in for 2011, who is having problems getting batters out, throws with less velocity, and looks scared when he's on the mound and you didn't ask how it went in Houston? Uh, okay. I thought this apporach was interesting though, "Kazmir will throw approximately 45 pitches in the camp game Tuesday – and Butcher wants them all to be fastballs." In other words, "throw some damn strikes, will ya?"

The La Times has some Kazmir stuff (Angels' Scott Kazmir to work on mechanics - latimes.com), "Angels Manager Mike Scioscia said he expects Kazmir to pitch at least twice in Arizona before deciding whether to schedule him for a minor league rehab start or to release him." Yeah, I added the last part, but doesn't that sentence seem to end abruptly? When the word "whether" is used I assume there's going to be at least a couple choices; "I can't decide whether to call the tall blond or the big-chested brunette". Decisions, decisions. Also in the Times post was this, "Reliever Scott Downs made two visits over the weekend to the emergency room of a Chicago hospital, the result of what he said was a severe stomach virus." Or he watched a recent Kazmir video.

Here's your chance to have lunch with Torii Hunter AND help out a deserving charity: "Hearts at Bat" luncheon is April 26th (need to register by the 21st) at the Hyatt Regency Orange County. Register here: PCAAOC.ORG.

What Should LA Do With Erick Aybar? - Beyond the Box Score
So what exactly should the Angels do with Aybar? Should they just assume that the playing time thing will work out and return Izturis to his utility role? All four players are arbitration-eligible and should receive raises next winter, though, and they already make a combined $11.6 million this season. Do you see what kind of value Aybar might have on the trade market? There aren't exactly that many legitimate starting shortstops around in Aybar's salary range.

This really isn't a tough scenario. With the injury history of Maicer Izturiz, it's probably just a matter of time when he gets hurt and the talk of any log-jams in the Angel infield will be moot. But...the Angels do have prosmising middle-infield help in the minors, should the Angels look into dealing one of them for a starting pitcher?

Dan Haren’s Commanding Start - FanGraphs Baseball
Through his first four starts, and one appearance out of the pen during an extra-innings game, Haren is throwing his cut fastball much more than he did in the past. By my classification of the PitchFx data he is throwing it just under 40% of the time.

Well whatever he's doing, keep it up! 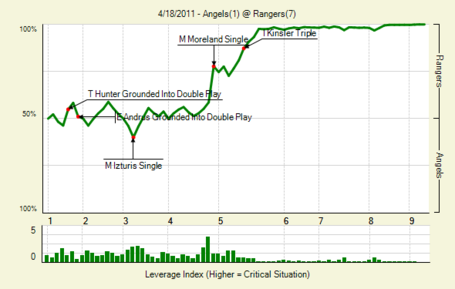 AccuScore: Angels and Cardinals lift off - Yahoo! Sports
The Angels jumped over 30 percentage points in playoff probability, and are now basically even with the Rangers to win the AL West.

Today's good guy award goes to:
Video: David Wright plays catch with young Braves fans - Yahoo! Sports
Wright is going to get a lot of Southern-fried love for this round of catch he conducted with some young Braves fans before Sunday's game.

Today's dumbass award goes to:
Reds pitcher Mike Leake booked for stealing from Macy’s - Yahoo! Sports
In a stunning case of alleged of retail theft that makes little sense to anybody, Cincinnati Reds right-hander Mike Leake was arrested and booked Monday afternoon for allegedly stealing $59.88 worth of merchandise from a Macy's department store in downtown Cincy.

There's got to be something more to this. Some kind of mental thing. Why would someone intentionally shop at Macy's?

April 19 - BR Bullpen
Events, births and deaths that occurred on April 19.
1965 - At a cost of $20K, the original Astrodome ceiling is painted because the sun's glare makes fielding fly balls hazardous. This will cause the grass to die and spur the introduction of artificial turf next season.
1966 - The California Angels play their first game at Anaheim Stadium. Rick Reichardt of the Angels hits the first home run in the new ballpark, but California loses the game, 3 - 1, to the Chicago White Sox.
Happy b-day:
1983 - Alberto Callaspo, infielder born on the same day as...
1983 - Joe Mauer, catcher; All-Star

And finally, I received an email from one of Halo Heavens' members about something I noticed, but failed to act upon. There have been some comments in game threads directed at or referring to Hank Conger that are racially offensive. I don't want to get into specifics, get up on a soapbox, or over-emphasize political correctness, as I'm sure most of you know what I'm referring to. But I do want to make clear; HALOS HEAVEN DOES NOT TOLERATE ANY SORT OF RACIALLY OFFENSIVE BEHAVIOR.