Who's The Extra Pitcher, Hunter Needs To "Settle Down". Halolinks

Share All sharing options for: Who's The Extra Pitcher, Hunter Needs To "Settle Down". Halolinks

Scioscia wants Hunter to 'settle down' at plate - angels.comWhile Torii Hunter continues to struggle at the plate, in the middle of a 3-for-36 slump over the last nine games, Angels manager Mike Scioscia believes that he can turn it around just by settling down in the box. "He has become a little big on his swing and he has been trying to maybe create a little too much," Scioscia said. "He isn't taking what pitchers are giving him, especially with guys in scoring position."

A couple people have commented that Hunter seems to be trying to hit another monster home run like he did on opening day in Kansas City. I usually don't agree with stuff like that. I tend to think professional players are more level-headed in their approach at the plate, but although Scioscia doesn't come out and say it in the above quote, he might be saying the same thing as the comments made by our community.

I'm liking this Rich Thompson guy, where'd he come from? Just kidding, I know of "Chopper", but in spite of his 11th inning mini-meltdown, I'm really impressed with how he's improved. Here's what he had to say: (Angels stumble in return, lose to Red Sox in 11th - CBSSports.com)

"I just didn't make the pitches. That's basically it," Thompson said. "I walked the first guy, and that's always going to put you in a bit of a hole. If I make a better pitch to Pedroia, we would have been sitting a lot prettier than we were."

I also like the fact he took the blame for his failure in the game.

Weaver Stikes Out Cruz - Baseball Analytics
Cruz knew he would get a strike on 3-0, and Weaver put the pitch up and in, and Cruz swung through it. Weaver then took five miles off his fastball, dropping it from 90 to 85, and got another swinging strike.

Jered Weaver's conversion into an ace is complete - USATODAY.com
"There's no secret what he does. He puts together pitches really well and his fastball command sets everything up."

Conger settling into groove at big league level - angels.com: News
To begin Thursday's series against the Boston Red Sox, Angels manager Mike Scioscia penciled in Hank Conger to start behind the plate, something he has done only seven other times this season. Yet, in his 16 career starts, the Angels are 12-4, with the Angels pitchers owning a 2.28 ERA.

Angels rotation nearly at 80 percent - ESPN Los Angeles
Joel Pineiro's recovery from a shoulder injury appears to have taken a turn for the best, and it's possible he could return to the Angels rotation by the end of this month. Pineiro felt so good after his 45-pitch outing in extended spring training Wednesday that he told Angels manager Mike Scioscia he could be ready after just one more minor-league rehab outing. He'll make that Monday with the Class A Inland Empire 66ers. His next start could come in either Tampa Bay or Boston on the Angels' next road trip.

I'm really looking forward to the addition of Pineiro to the Angels' rotation. Considering how well Chatwood is doing, it's going to be a touch decision as to who goes down when Pineiro is activated. Regardless, the Angel rotation will be very, very good. 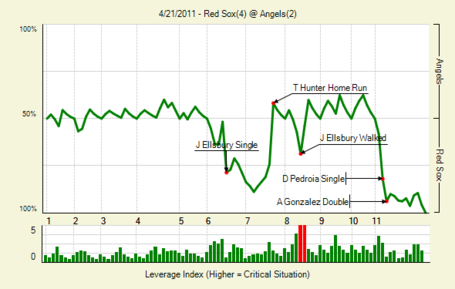 If you click one link today, make it this one and watch the video. Do it. Like right now. We'll be here when you get back.

I mentioned above how I liked that Rich Thompson took responsibility for his pitching. Well, Aardsma is the opposite. I thinking he might not be serious when he blames the music, but...

Vlad Guerrero Stumbling to Start 2011 - FanGraphs Baseball
Nothing seems to be working for Vlad early in the season. He’s just 19 for 71 (.268), and his BABIP, .281, isn’t too far off his .292 mark from last year, and it’s reasonably close to his .287 xBABIP. That is, it’s not as though he’s hitting the ball hard and finding fielders. He’s swinging at more pitches in general, and specifically more out of the zone. Worse yet, he’s making less contact on those pitches out of the zone, which has led to a spike in his swinging strike and, by extension, strikeout rates. He has, in other words, looked as poorly as he’s performed.

Poor Vlad, but didn't he always swing at some really bad pitches? I guess now he's not able to hit 'em.

MLB commissioner Bud Selig expects expanded playoffs by 2012 - FOX Sports on MSN
With both sides expressing support for adding two playoff teams in 2012, negotiators for baseball players and owners are considering having the new wild-card round be best-of-3 or winner-take-all.

April 22 - BR Bullpen
Events, births and deaths that occurred on April 22.
1914 - At age 19, Babe Ruth plays his first professional game as a pitcher, as he throws a six-hit, 6 - 0 shutout for the Baltimore Orioles over the Buffalo Bisons. The second batter Ruth faces is Joe McCarthy, the manager he will play for 17 years later with the Yankees. Ruth is 2 for 4 at the plate in addition to his great pitching.
1981 - Los Angeles Dodgers rookie Fernando Valenzuela pitches his third shutout in four starts, strikes out 11, and has the game's only RBI with a single in a 1 - 0 win against the Houston Astros.
2010 - Former major league manager Kevin Kennedy, now working as a broadcaster for the Tampa Bay Rays, is suddenly thrust into the limelight, as he intervenes to stop a deranged man who threatens to blow up a flight between Los Angeles, CA and Tampa, FL. Kennedy is one of ten passengers who subdue the madman as the Delta Air Lines flight is diverted to Albuquerque, NM.
Happy b-day:
1959 - Terry Francona, infielder, manager Happy b-day Tito! How about a big stinking loss to celebrate!