I'm not an expert on pitching, but I think this Jered Weaver kid might be pretty good - Oakland Athletics at Los Angeles Angels - April 25, 2011 - MLB.com:

Does that qualify for the pitchers triple crown? Anyway, following Weaver's last start I mentioned the speed for the each of his third strikes

Last night, Weaver struck out ten more batters to add to his league-leading total. The speeds of each of his third strikes were: 93, 94, 91, 94, 93, 79, 92, 80, 76, 80. See a trend there? Through the first part of the game, Weaver probably thought he had it going on with is fastball as the first five K's were all done with 91+ heat. What's interesting is then he changed things up and went off-speed for the next five strikeouts. Pretty frickin' cool if you ask me, one game is a shuffle of pitches following 2-strikes, the next his hard stuff then off-speed. I think I might start trending this stuff to see the awesome-sauce. Here's the video: Weaver shuts out the A's - MLB.com

Does anyone think this might be a make-it/break-it game for Chatwood? Joel Pineiro is due to return shortly meaning one of Chatwood or Palmer will be sent down. Chatwood pitches well; he stays, pitches poorly; see ya later. Athletics-Angels Preview - FOX Sports:

Chatwood goes for his first career home win Tuesday night when the Angels look for their sixth straight victory over the Athletics, and eighth in a row at home versus Oakland.

Kendrys Morales' rehabilitation from broken ankle hits another snag - Los Angeles Times
But Morales seems no closer to beginning a rehab assignment today than he did on April 12, when he resumed running for the first time since mid-March. "There are setbacks and plateaus" in the recovery process, Scioscia said. "He's due to break through a plateau."

Does he have to use the word "break"? I think I mentioned this before, but how long is this going to take? Wasn't there talk of Morales returning before the end of last season...and now he's going to end up being out for more than a year - at least? Depressing.

Ladies and gentleman, may I introduce you to the Angels' next hitting coach.

Kendrick drives in a pair with a single - Video | MLB.com
Howard Kendrick rips a single to right to score Vernon Wells and Alberto Callaspo, giving the Angels a 2-0 lead in the second

Abreu drives in Bourjos with a double - Video | MLB.com
Bobby Abreu rips a double to left to score Peter Bourjos all the way from first, giving the Halos a 3-0 lead in the third

Aybar makes an incredible play in the eighth - Video | MLB.com
Erick Aybar makes a nice stop in the hole, then fires from the outfield grass to just get Daric Barton on a close play at first

There was one for Mathis, but it looked like Crisp would have safe if he hadn't over-slid the bag. NO MATHIS FOR YOU!

Was there ever any doubt?: 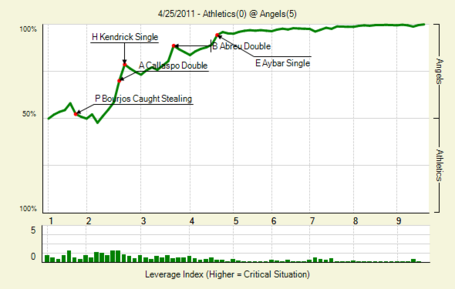 Angels hope Amarista can provide boost - angels.com
"He can play second base and has played the outfield before, so he will take a little pressure off of some of our guys."

Basically it sounds like he's Reggie Willits with skillz.

Pirates Notebook: Huntington values Wood's power - Post-Gazette.com
"Are we going to be able to tap that potential and close the gap between the performance and the potential? That remains to be seen," Huntington said. "We felt like it was an upgrade for us presently with very little risk on some upside beyond that." Wood said he wants to get back to staying inside the ball and hitting it to the opposite field as well as enjoy his time on the field.

Okay, I'm the king of reading stuff into things and here's today's edition: Wood says, "he wants to go back to staying inside the ball and hitting it to the opposite field". Does that mean the Angels were trying to get him to pull the ball more and thus screwing him up, or is this just a player trying to say the right things after joining a new organization?

Bud Selig had many reasons to act on McCourt but not Wilpons - Jon Heyman - SI.com
It's true the Mets and Dodgers both have financial issues, but that's about where the similarities seem to end.

Interesting post about the two messed up franchises and the way Bud is handling them.

And speaking of which:

Tom Schieffer: 'We need to get the Dodgers back to where they've always been' - latimes.com
Schieffer said he had not spoken with Dodgers owner Frank McCourt as of Monday night but hoped to do so soon. Schieffer said he could not yet discuss what role McCourt might play; Selig has stripped McCourt of authority in the Dodgers' business matters and financial affairs. I thought this was funny (Ex-Texas Rangers pres hired by MLB to run Dodgers - MiamiHerald.com):

In seizing control of the franchise, MLB told the Dodgers that any expenditure of $5,000 or more would have to be approved.

Looks like McCourt will now have to go to Super Cuts.

Here's how you can impress your friends and especially hot women:
How to Speak Sabermetrics to a Mainstream Audience - FanGraphs Baseball
How do you talk to your friends about sabermetrics without confusing them and looking like a nerd? It’s a tough balance to maintain, but I’ve found there are five guidelines that work well for me when talking with friends and writing articles.

Works better than Rohypnol on them women-folk. The talk...not the article.

April 26 - BR Bullpen
Events, births and deaths that occurred on April 26.
1941 - Wrigley Field becomes the first ballpark to install an organ to entertain fans, with Roy Nelson manning the keyboard.
1986 - The game between the California Angels and Minnesota Twins is delayed for nine minutes when strong winds tear a hole in the Metrodome roof, causing suspended lights and speakers to sag toward the field. The roof is reinflated and California rallies for six runs in the ninth inning to win, 7 - 6.
2000 - Vladimir Guerrero of the Montreal Expos hits his 100th career home run to help Montreal beat Colorado, 9 - 2.
2005 - At Yankee Stadium, Alex Rodriguez slugs his way to the best performance of his career, hitting three home runs in his first three at-bats off Angels pitcher Bartolo Colón. And now they're teammates! WOW!
Happy b-day:
1914 - Bernard Malamud, writer (d. 1986)
1985 - Sean Rodriguez, infielder