How Can It Get Worse, Who Can Be Any Better? Halolinks.

Share All sharing options for: How Can It Get Worse, Who Can Be Any Better?  Halolinks.

Let me start off with a quote:

You know what's wrong with that quote? The only time someone says something like "It could always be worse" is when things are already pretty bad. And that's the case with this Vernon Wells quote (Vernon Wells: It can always get worse - ESPN Los Angeles). However, how could things get worse? Wells has already fallen behind arguably the worst hitter in baseball, Jeff Mathis. After yesterday's game Wells' OPS+ was 38 compared to Mathis' OPS+ of 59. Any upgrade to the Angels outfield defense hasn't really shown itself. Even without yesterday's goof, Wells' defense hasn't lived up to all the hype. Things can get worse? I can't see how.

Two years ago, I was pretty excited about the Angels signing of Brian Fuentes to replace Frankie Rodriguez as closer. Then the reality set in and I had to admit I was wrong, and was glad when the Angels traded him last August. Nothing personal, just wasn't impressed with Fuentes' abilities and what's weird is, I had kind of forgotten how crappy he was...until yesterday (Angels score off Fuentes in 9th, but lose in 10th - KansasCity.com). Within this article, Fuentes is quoted, "I got booed quite a bit here, which was kind of weird, and I don't really know why." Seriously? He doesn't know why? If yesterday's game had been played in Oakland, would he have questioned why he was getting booed after the inning he pitched?

Is Haren-Weaver The AL's Best Pitching Duo? - Beyond the Box Score
Because I've gone over the key options, which are shown below with their combined 2011 statistics, and I'm thinking that they might. And you know what might be even more shocking? That their biggest competition comes from within the division, and doesn't involve Felix Hernandez.

This post isn't all that interesting. Mainly just a list of pitching duo throughout the AL. What I find interesting is there really a question as to who the best duo is? If we can step outside of our fan bias, at this point of the season, it's clear who the best two pitchers are: Weaver and Haren. According to the WAR numbers supplied in the post, Weaver and Haren are a game better than the next duo and twice as good as the rest. With a little...I hate to use this word, but...luck, both pitchers could be 6-0 (not that wins are a good indicator of success, but you know what I mean).

Downs, Pineiro activated from disabled list - angels.com: News
Activated from the 15-day disabled list were starter Joel Pineiro and reliever Scott Downs. Veteran reliever Jason Bulger was designated for assignment, and Matt Palmer was optioned to Triple-A Salt Lake. The Angels have 10 days to make a deal for Bulger, waive him or release him. The 32-year-old right-hander figures to have appeal on the market, carrying a 0.96 ERA in five appearances this season.

There was a FanShot with some interesting coomments about this, but I've added it here also just so I could ask the question, "Will Bulger get dealt or released?" The reason I ask that is, wasn't there any interest in Brandon Wood when he was put through the same situation as Bulger is now? Wood had to have had some trade value, just as Bulger does. To me, this is another failing of the Angels' front office in not determining player worth.

Another doctor’s visit for Morales - The Orange County Register
Angels manager Mike Scioscia characterized Wednesday’s examination as "just part of the process" and not prompted by any new setback in Morales’ rehab. Morales has been taking batting practice daily, going through agility drills and fielding ground balls. But he has done no running activity for a couple days now "to allow more recovery days after his running," according to Scioscia.

At least there weren't any setbacks,but "the process" is still pissing me off.

Aybar is hit by pitch, called a strike - Video | MLB.com
Erick Aybar appears to be hit by a pitch in the bottom of the ninth, but remains at the plate when it is called a strike.

This is where I think the game went completely off track. There's a big difference in a man on second - one out, and first and second - no outs.

Abreu's double ties the game in the ninth - Video | MLB.com
Bobby Abreu drills a double to left off Brian Fuentes to score Mark Trumbo and knot the score at 1 in the bottom of the ninth 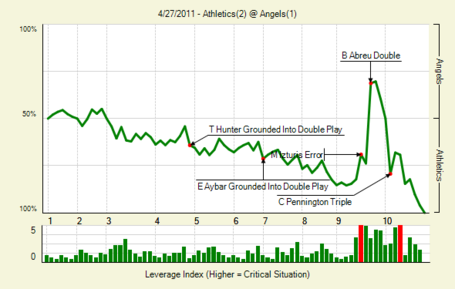 One of the worst calls you’ll see this year - HardballTalk
Jose Reyes hit a triple in the eighth inning of last night’s Mets-Nationals game. And then he was called out for allegedly taking his hand off the bag.

Andre Ethier extends hit streak as LA Dodgers beat Florida Marlins - FOX Sports
Ethier extended his record April hitting streak to 24 games in the fourth inning, then homered in the 10th to help the Dodgers salvage the final game of their three-game series against Florida, 5-4. ''I'm just trying to do what the situation calls for,'' Ethier said.

Some good news for Dodger fans. And then the not-so-good-news:

Frank McCourt says Bud Selig has "predetermined" agenda to force him from ownership of Dodgers - latimes.com
McCourt said he was told during Wednesday's meeting that Selig had rejected the television contract with Fox that had been presented as the solution to the Dodgers' long-term financial challenges. In his statement, Manfred said McCourt had been told Selig would make no decision on the agreement until an investigation into the Dodgers' finances was complete. McCourt said the Fox deal would provide the Dodgers with $300 million in funding now and could be worth "in excess of" $3 billion over 17 years, providing the team with "the financial wherewithal to compete at the highest level in baseball for years to come." McCourt said he would invest that $300 million into the team and said he had signed an agreement that none of that money would be used to settle his divorce or for any other personal purpose.

...and then Craig Calcaterra hits the nail on the head with his analysis of McDork's statement:

Great Moments in Chutzpah: Frank McCourt on "transparency" - HardballTalk
Frank McCourt put millions of dollars worth of other people’s money into the purchase of the Dodgers, mismanaged it, hid the extent to which he and his wife used the team as their own private bank accounts, and now has the nerve to talk about his "hard-earned dollars," his rights, his property and transparency?

It's possible that I would feel bad for McCourt. After all, it is his team and his ass on the line, but the way he has taken advantage of the team's finances and the arrogance in doing so has left me with nothing more than, "HA-HA!"

Predicting Shutdowns and Saves - FanGraphs Baseball
Every team plays in about 100 three-runs or less games, 60 blowout games, and 45 one-run games — and the distribution is about equal, regardless of how good a team is.

Here's a late add to the links. I received an email that pointed to this link (MLB Rewind: An NFL Mock Draft of Major League Players - OregonLive.com). It's got a lot of cool information, but one of the things I took away from it was how many players were quarterbacks. Here's the #24 pick in this draft:

24. New Orleans: Jeff Mathis, QB (catcher, Los Angeles Angels) Saints aren't messing around: Drew Brees couldn't lead them back to the Super Bowl, so he's out. In is Mathis, who as a high school senior led his team to the Florida state championship game.