Share All sharing options for: Howie Kendrick - the Next Manny Ramirez? Angels Head to Tampa.  Halolinks.

Lyle makes me smile.  Not because that phrase rhymes, but because he's just so happy about the Angels.  Here's what he has to say about Angels' second baseman Howie Kendrick in this post (Angels second baseman Howard Kendrick takes power surge into Tampa Bay):

A chiseled 5-foot-10 and 215 pounds, Howard Kendrick has a slugger's physique along the lines of Manny Ramirez.

Manny Ramirez?  That's who Kendrick reminds Lyle Spencer of?  Umm, okay.  Spencer goes on to write, "But the Angels second baseman has never had a slugger's mentality. An impressive power display in the season's opening series at Kansas City did nothing to change that attitude."  And let's not forget everyone's favorite line, "A .360 hitter in his Minor League career, Kendrick was billed as a future batting champion."  Okay, I like Howie (or Howard) Kendrick, and I'm happy about his hot start, but maybe we should just wait a couple more weeks before comparing him to Manny Ramirez.

The Angels start a quick, 2-game series in Tampa against the Rays today and tomorrow.  While the Angels were losing 3 out of four in Kansas City, the Rays were getting swept by the Baltimore Orioles.  Today's game starts at the strange time of 3:40pm (Pacific) and tomorrow's game time is zero-dark-thirty...I mean 10:10am (also Pacific).  A lot has been written about the Halo bullpen, and Fox sports had this to say in their preview (Link: Angels-Rays Preview):

The Los Angeles bullpen is 0-3 with a 5.06 ERA and one save. That unit has allowed 19 hits, including five homers, and 13 walks in 16 innings. "We need to find some chemistry down in the 'pen," Scioscia told the Angels' official website.

I'm not too sure what Scioscia means by "chemistry" unless he's planning on having Barry Bonds come in to do a lecture series -- "Winning through head growth and testicle shrinkage - Baseball Chemistry 101".  It's only been four games, but how about a little shake-up of roles until something works instead talking about chemistry?  Anyway, back to Tampa.  The winningest Angel pitcher in 2011 takes the mound this afternoon when Jered Weaver (1-0, 0.00 ERA) gets the start.  So far this season (1 game!), he's allowed two hits and struck out six in 6 1-3 innings and according to Fox Sports, "Weaver is 3-1 with a 2.45 ERA in five career starts against the Rays. He's 4-0 with a 2.63 ERA in his last seven outings in April."   The Rays will start Jeff Niemann who is makiing his season debut.  Last season Niemann gave up 15 combined runs in 7 2-3 innings in losses to the Halos on Aug. 25 and Sept. 19.

A Tale of Two Cities and Their Broken Pitchers - FanGraphs Baseball
Kazmir was among the worst pitchers in baseball last year, and that version was far superior to the one who took the hill for the Angels yesterday (Sunday).

Geez, tell us how you really feel.  Dave Cameron must have forgotten about Kaz's July 10th game last season.  You know the game, 5 innings...13 earned runs.  However, when I think about it, Cameron might be right.  If Scioscia had left Kazmir in Sunday's game for another 3.1 innings, he might have given up more than 13 runs.  Yikes.

Here's the funniest line you'll read today (from another FanGraphs post titled,17 Predictions That Will Be Right):

11. The Angels will inspire multiple "this looks like a team put together by the guy who is filling out your fantasy league and hasn’t really paid attention to baseball since 2006″ jokes.

Okay, it might not be that funny.   Actually, for us Angels fans, it might be more sad than funny.

Separated at birth: Jason Giambi and Vincent Van Gogh - Yahoo! Sports
With no still cameras or HD video allowed in the courtroom to broadcast images of crying witnesses and preening lawyers, those of us who want to see what's going on at the Barry Bonds perjury trial are forced to rely on a more old-fashioned profession: The courtroom sketch artist. 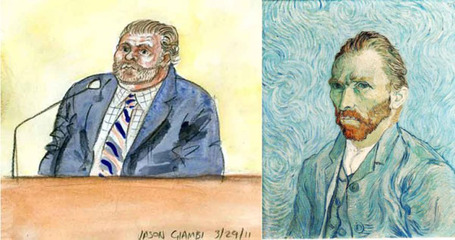 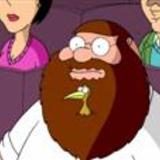 Well, maybe not right now, but in a couple years...

LA Angels' Awful Start: Time to hit the panic button? - Halos Hub
But the truth is, no one in the Angels’ front office, or Scioscia and Butcher, actually play the games themselves. Scioscia and Butcher were not the reason that Scott Kazmir couldn’t get out of the second inning.

No, but Scioscia and Butcher are the reason Kazmir was on the mound.  (this is a new-to-me Angels blog I came across.  You might want to check it out.)

Travs Announce 2011 Opening Day Roster - OurSports Central
The Arkansas Travelers, in conjunction with the Los Angeles Angels, announce their opening day roster for the 2011 season. In his first year taking over the Travs managerial duties Bill Mosiello brings a versatile club that includes eight newcomers to the Double-A level including top-rated prospect Mike Trout who opens the season as the team's centerfielder.

If Tim Salmon was known as the "Kingfish", will Trout become "Princefish"?  God, I hope not.  Anyway, Trout moves up a level on his march to Anaheim.

Here's an update on the Giants fan who was beaten by a couple idiot Dodger fans (Giants fan remains in coma after attack at Dodger Stadium -  USATODAY.com):

Stow, a 42-year-old Giants fan from Santa Cruz, Calif., was critically injured Thursday night after he was beaten by Dodgers fans after the team's opening-night victory at Chavez Ravine. He remains hospitalized in Los Angeles after undergoing surgery to remove a portion of his skull to ease swelling. 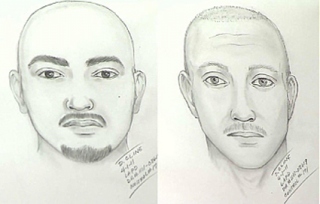 And here's the world's easiest (and possibly best) job:

"Yeah Honey, I just got hired by the Colorado Rockies!  I babysit their balls."

April 5 - BR Bullpen
Events, births and deaths that occurred on April 5.
1934 - Babe Ruth, sponsored by Quaker Oats, agrees to do three 15-minute broadcasts a week over NBC. The total of $39,000 for 13 weeks is $4,000 more than his New York Yankees contract.
1972 - For the first time in Major League Baseball history, the regular season fails to open due to the player strike which started on April 1. 86 games will be lost before the labor dispute is settled.
2010 - Matt Stairs appears for the San Diego Padres, his 12th different club. This breaks Deacon McGuire's 98-year-old record for teams played for by a position player.