Effective Use Of Angels' Relievers, Starters Continue to Dominate. Halolinks

Share All sharing options for: Effective Use Of Angels' Relievers, Starters Continue to Dominate.  Halolinks

Jonah Keri over at FanGraphs.com has written an article about the Angels bullpen situation (here's the link to the post: Jordan Walden: The End Justifies the Means) that takes a look at how the Angels are using their relievers. In this article he claims the Angels have done something that every team should do...use their best reliever in high-leverage situations:

On the other hand, teams are also often better served using their best relievers in tight spots in the 7th and 8th innings, rather than saving them for a relatively cushy closer job that usually starts with the bases empty, often up two or more runs, and needing only three outs to end the game. Fortunately for the Angels, hard-throwing, 26-year-old righty Kevin Jepsen will likely be that guy, armed with the track record and projections to trump both Walden’s and Rodney’s expectations. Like the Brad Lidge-less Phillies, the Angels have made their best reliever into their top set-up man, and their second-best reliever into the closer.

I absolutely agree with this strategy. Why use your best pitcher in one of the lowest-leverage points of the game, but the question is; Are the Angels really using their best relief pitcher (Kevin Jepsen) in those situations? Prior to the arrival of Jordan Walden, many thought Jepsen was the next Angels closer. He has the "stuff" most closers are made of, mainly he throws his fastball in the mid to upper 90's. However, so far this season, Jepsen's fastball hasn't shown the same velocity as previous seasons. So far his fastball has averaged 92.9 mph compared to the 94.3 - 96.2 range in 2008 to 2010. It's real early, and Jepsen has only thrown 3.1 innings, but could the drop in velocity account for Jepsen's slow start? A slow start that includes 3 walks and zero strike outs. I guess what I'm try to get around to is, this may be the time for Scioscia to better utilize Rich Thompson. Although up until his late call up last season, Thompson really hasn't shown much in his limited major league opportunities, yet in over 115 innings in Triple-A he's been very successful, especially considering he has pitched in the hitter-friendly park in Salt Lake. I'm not trying to make a bigger deal out of this than it really is. The Angels have a very good bullpen, and Scioscia has shown he's willing to make the necessary "tweaks" to get the most out of them. I'm just wondering if we'll see more "tweaks" in the near future.

Here's an interesting stat provided by Mark Saxon over at ESPN (Why the Angels always have a chance):

Since last Aug. 29, Angels starters have a 2.75 ERA -- and that's with fifth starter Scott Kazmir dragging down the numbers. The only team in baseball that has been more dominant in that span is the San Francisco Giants, whose starters have a 2.38 ERA.

And all this time we've heard about how great the Phillie rotation is, how 'bout them Angels!

He has sat out three games with what the Angels had been calling muscle tightness in his left side, and now infielder Erick Aybar has undergone an MRI that revealed a slight strain, according to Manager Mike Scioscia. "Right now we're hoping it's not a [disabled-list] situation," he said of Aybar, who had the exam Wednesday morning.

But here's something that caught my eye regarding the age of the Angels roster, "And with an average age of 28.3 years, it's also the fifth-youngest roster in baseball and the franchise's youngest since the World Series year of 2002 — though the average age of that team was skewed a bit by late-season call-ups from the minor leagues." At first I thought that number was skewed by the elderly offense, but when broken down by pitching and position players, it stays pretty much the same: pitchers: 28.5, hitters: 28.1. This will change once Scott Downs (35 years old) and Joel Pineiro (32) return from the disabled list.

And since I mentioned Aybar's injury, here are all the players on the disabled list: Major League Baseball Injury List - FOX Sports 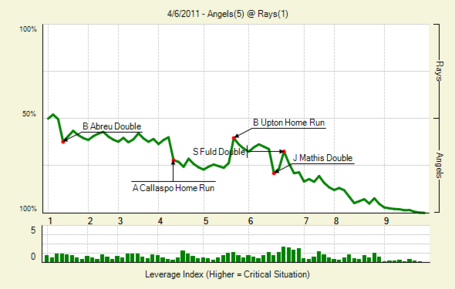 According to FanGraphs, Dan Haren had the highest win probability added at .323, with Jeff Mathis leading the offense with a WPA of .135.

MLB Standings - SI.com
And yeah, the Texas Rangers won again and are now 6-0 on the season. Here's how they're handling that in Arlington: 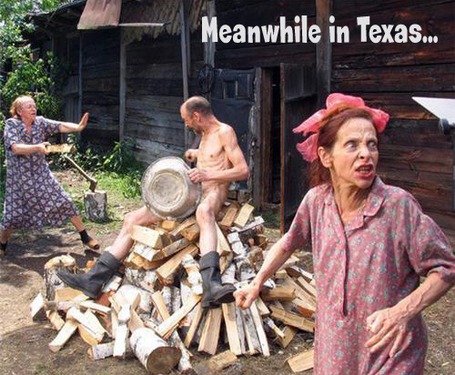 April 7 - BR Bullpen
Events, births and deaths that occurred on April 7.
1969: Pitcher Bill Singer of the Los Angeles Dodgers earns the first official save in MLB history. Making his only relief appearance of the season, Singer finishes off Don Drysdale's 3 - 2 victory over the Cincinnati Reds. Thanks to the efforts of sportswriter Jerome Holtzman, the save become an official statistic this off-season.
1970 - The Milwaukee Brewers play their first home game after their recent relocation from Seattle where they had played the 1969 season as the Pilots. The Brewers lose to the California Angels, 12 - 0, as major league baseball returns to Milwaukee, WI after a five-year absence.
1971 - The dismissal of Curt Flood's suit against Major League Baseball is upheld by a three-judge U.S. Circuit Court of Appeals.
1983 - Major League Baseball, ABC, and NBC agree to terms on a six-year television package worth $1.2 billion. The two TV networks will continue to alternate coverage of the playoffs, World Series, and All-Star Game through the 1989 season with each of the 26 clubs receiving $7 million per year in return. The last package gave each club $1.9 million per annum.
2010 - New Yankees centerfielder Curtis Granderson quickly makes his presence felt with the "Bronx Bombers". After homering in his first at-bat for the team on Opening day, April 4, he hits a game-winning long ball off Boston closer Jonathan Papelbon in the 10th inning of today's game, which started as a pitching duel between Andy Pettitte and John Lackey, giving the Yankees a 3 - 1 victory.
Happy b-day:
1944 - Bill Stoneman, pitcher; All-Star