Share All sharing options for: Rich Thompson: Angels Bullpen Stud, It Should Be Trout Season.  Halolinks.

Many people feel the secret of Mike Scioscia's success with the Angels has been his ability to build and mange a strong bullpen. I've written about how surprising it was this season for Scioscia to change the makeup of the Angels pen so quickly, inserting Jordan Walden into the closers role and relegating Fernando Rodney to lower-leverage innings. He's not done yet, or at least he shouldn't be. There's one more change I'd like to see him make and that's using Rich Thompson at more critical points in the game...and maybe let him get the opportunity to finish a game or three. Here's something about Thompson's early results (Thompson thriving in Angels bullpen - angels.com):

After throwing a total of 19 2/3 innings all of last season, Thompson had already tossed 19 innings this season entering Monday and had recorded 22 strikeouts, which led American League relievers.

And if that change doesn't work out, there's always this one (Closer Walden adds changeup to arsenal - The Orange County Register)

The seven (changeups) he has thrown this week averaged 87.6 miles per hour, 10 mph slower than his average fastball. He kept all seven down or away — the ideal location against left-handed batters. Opposing hitters, likely unprepared for the pitch, swung at all seven, including four swings and misses.

Hopefully we get to see both pitchers tonight, that is after Joel Pineiro goes his 7 brilliant innings (White Sox-Angels Preview - FOX Sports)

I'm not sure if Mike DiGiovanna figured this out, or if he got the information from somewhere else, but regardless, very interesting information on Angels Stadium. The post points out the heavy marine layer is the reason behind the home run totals, could this be what's hampering the Angels leading to their poor home record (8-9 at home, 12-7 on the road)?

Wells injury puts the Angels in a jam - ESPN Los Angeles
The most intriguing option is playing at Double-A, but manager Mike Scioscia quickly dismissed the notion of recalling top prospect Mike Trout, 19. These aren't the right circumstances and rushing prime talent is rarely a good idea.

I was going to type, "Robin Yount says 'Hi"" (Yount played 107 games for the Milwaukee Brewers at the age of 18), but reconsidered when I realize there this probably something like 10 prospects who got an early call and fail to every Yount-type player who succeeds. But still, bring him up. For three weeks. Give him 50 at-bats. And then decide.

Oh, and one other thing...if Wells' injury looks like it'll linger for longer than a few weeks, the Angels will trade for Carlos Quentin. Just my gut feeling.

Bryce Harper, Mike Trout top list of best minor league prospects - Jon Heyman - SI.com
2. Mike Trout, Angels centerfielder. The Mickey Mantle comparisons have folks excited. But assuming he doesn't live up to that stratospheric billing, folks are convinced he will still far outstrip his draft spot as a late first-round pick in 2009. Then Angels scouting director Eddie Bane had him as the second player on their board (behind Stephen Strasburg) and that may turn out correct. At 19, Trout is thriving at Double-A Arkansas, with five homers, five steals and a .304 average. He's been clocked in 3.8 second down to first, one of the fastest times ever for a righthanded swinger. "He's one of the most exciting players,'' the NL exec said. Beyond that, "He has no real weaknesses.'' The only question seems to be whether he'll blossom into a big-time power hitter or be a speed guy who hits 15-to-20 homers.

Speaking of the Angels soon-to-be-new left fielder, I found the bolded portion interesting. I've often wondered if the Angels hadn't had back-to-back picks in that draft, would they have taken Randal Grichuk before Trout. According to the above information, it doesn't look like it.

Team Reports - CBSSports.com
DH Bobby Abreu has just one home run this season, and the Angels have just two from their DHs this year -- both in the first series of the season (Abreu's on April 2 in Kansas City and one from Torii Hunter the next day). Going into Monday's games, only two AL teams had fewer home runs from their DHs (the Royals and Mariners).

4 -- Times the Angels have been shut out in their first 36 games this season after Monday's 8-0 loss to the White Sox. They were not shut out for a fourth time last season until Aug. 13, 117 games into the season.

Could one thing be related to the other? This isn't a knock on Abreu, or at least isn't intended to be. The Angels are 7th in the AL in home runs, which is pretty amazing considering the LA Times post above, so thelack of power from their DH spot isn't much of a weakness. Right?

FanGraphs Power Rankings – 5/9/11 - FanGraphs Baseball
No one had a better week than the Angels, as they jumped five spots up to eighth place. That they did so in the face of the first two negative WPA starts of the season from Jered Weaver is all the more encouraging for Angels backers.

Time for some VISUAL AIDS:

BABIP Update : baseballmusings.com
Someone suggested I just look at April BABIP, and I could do that back to 1957. Here are the results: 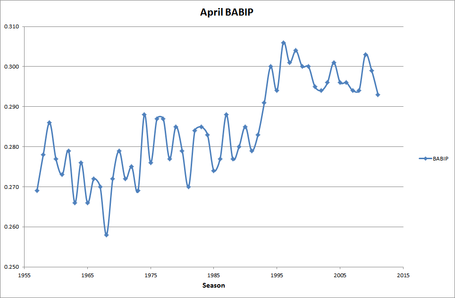 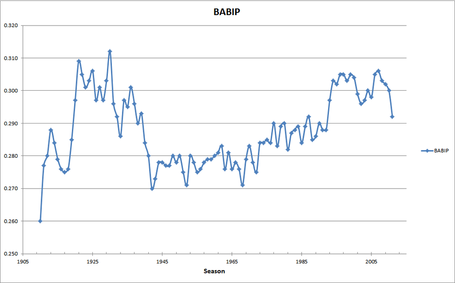 I keep reading that BABIP is "luck" dependent. I really haven't looked too much into that, but if it is true, are players getting luckier? That's how I read the two charts as the BABIP trends upwards.

No-hit Dominance & Futility since 1962 - Beyond the Box Score
Francisco Liriano's no-no earlier this week was the 127th no-hitter thrown since 1962. The graphic above lists each major league team and the number of times they both thrown no-hitters (orange) and been the victim of a no-hitter (blue). 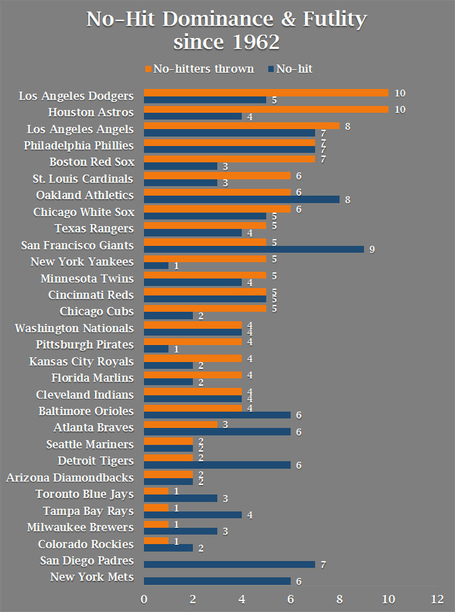 Gimme Five: American League scoreboard features oddity - Big League Stew - MLB Blog - Yahoo! Sports
On Sunday, each of the seven games on the American League schedule featured a team that scored exactly five runs — four winners and three losers.It was the first time in 18 years that such a quirky thing happened with a full schedule. 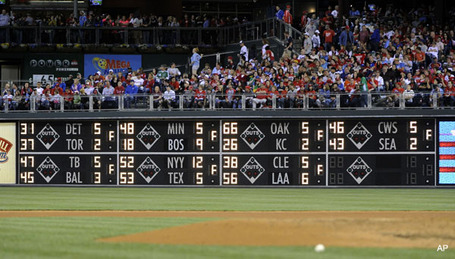 Time for some YANKEE BASHING:

Are Yankees shorting waiters on their tips? - USATODAY.com
The money in question is related to the 20% service charge that is added to prices listed on menus. That adds up on $9.50 beers and $8.50 hot dogs. "In fact, the food service workers did not receive any of the 20% service charges," says a suit field in Manhattan Federal Court.

A six-man rotation. So much for olde-time baseball.

Updated benchmarks for pitch types - The Hardball Times
It's been a year—time for new PITCHf/x-based benchmarks.

This is a pretty cool post. If you click the link, within the article is the average pitch speeds for each type of pitch. Nothing ground-breaking, but I still thought it was interesting.

May 10 - BR Bullpen
Events, births and deaths that occurred on May 10.
1893 - Brooklyn's joy over beating the New York Giants in the bottom of the last inning for the second straight day is partially dashed as youngster Willie Keeler fractures a bone while sliding. Keeler will miss nearly two months of action. Tow months? TWO MONTHS! Someone tell Morales it's only supposed to take two months to heal.
1950 - The Reds trade veteran C Walker Cooper to the Braves for 2B Connie Ryan. I almost always try to add this to each Halolink post as I think it's interesting to read what happened on this date in baseball history. And usually, B-R has some really good facts. This one? Not so much. I've never even heard of those two players, why is this supposed to be worthy of a spot here? Seriously, we need stuff like this item below...
1991 - Oakland OF Jose Canseco is photographed leaving the West Side apartment of singer Madonna. He then goes 0 for 3 in Oakland's 5 - 3 loss to the Yankees. That was today? I would have planned a party had I known!
2002 - The Angels score 8 runs in the 3rd inning on their way to a 19 - 0 rout of the White Sox. The Haloes join the 1923 Indians, 1939 Yankees and 1950 Red Sox as the only teams to beat two opponents by 19 or more runs in the same season. Earlier this year, the Angels beat the Indians, 21 - 2. The Anaheim destruction of Chicago is just the 11th since 1901 in which a team scored 19 or more runs while shutting out its opponent, and the first such shutout in the American League since 1955, when Cleveland beat Boston, 19 - 0. Hopefully history repeats itself tonight.
Happy B-day:
1941 - Ken Berry, outfielder; All-Star
1965 - Mike Butcher, pitcher