This is the next in our series of getting to know the guys folks at Halos Heaven who deliver the goods for you. Today let's meet MISSUS HALOFAN. Without her, let's just say that things would be a lot more insane. She regularly walks into the room and says "Dude, you went too far" when she has read a hot topic comment or post of mine. On occasion, though, she says "Why the 'heck' are you going so soft on (insert various Angels conundrum here)". Basically, she is the co-pilot of this blog in the sense that many a story has been inspired by, disappeared, been radically altered, had its author banned for life, et cetera, because of her influence. Many of my editorials over the years along with hundreds of witty posts were all her idea. Because of that I made her do this interview.

WHO WAS THE FIRST ANGELS PLAYER YOU DECIDED WAS "YOUR GUY" ?

Scott Schoeneweis - okay, I was naive, new to the game and misguided and seduced by his physique.

Maicer Izturis - he gets it done.

In the middle - the players have to perform, but I do think that winning teams also come together to create a momentum.

PICK A SONG FOR THE ANGELS TO REPLACE BUTTERCUP WITH...

IF YOU WERE IN CHARGE OF THE ANGELS SUMMER CONCERT SERIES, NAME THE PERFORMER YOU BREAK THE BANK TO GET.

SAY SOMETHING CONTROVERSIAL FOR US TO REMEMBER YOU BY...

I used to like watching Gary Matthews Jr. play Centerfield when we had season seats near the center field’s batter’s eye, but not because of his fielding, but because he had a really nice ass . 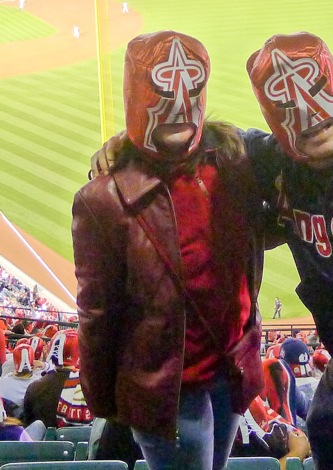 Missus Halofan. You should all be so lucky.