Angels Use A Different Kind of Slugging, No Wright For Halos...For now. Halolinks.

Share All sharing options for: Angels Use A Different Kind of Slugging, No Wright For Halos...For now.  Halolinks.

That "batter's box offense" hasn't emerged as planned either. The Angels rank 22nd in the majors with a .399 slugging percentage, a mark that would be their lowest since Scioscia became manager in 2000.

Obviously, losing Kendrys Morales early in the season had a big impact on the Angels power production, but one hitter doesn't a team make. In this article (Angels power outage worsening - The Orange County Register) Bill Plunkett suggests the Angels lack of power is something new. However, the Angels' .401 slugging percentage ranks 11th in the majors, up 9 places from last season. So while that .401 slugging is identical to last season's clip, it's the rest of the league has fallen off the pace, not the Halos. Admittedly, the Angels do lack the middle-of-the-order big power threat, the team is still driving the ball using a different kind of approach. One item I found interesting in Plunkett's article was this quote from Tony Reagins:

If the Angels don't play a "power-type game" why did they go out and trade for Vernon Wells?

Hey, how about some rankings!:

Power Rankings: Week 7 - Beyond the Box Score
#16 - Very good defense and a great top of the rotation, but an offense led - with some major BABIP help - by guys like Maicer Izturis and Erick Aybar.

Power Rankings – 5/16/11 - FanGraphs Baseball
#13 - While debating whether or not Howie Kendrick is for real, one thing that probably isn’t debatable is that if Kendrick really is the Halos best hitter, their offense is going to be on shaky ground all season.

Angels fall in 10th after A's late rally - MLB.com
The Athletics get the best of Fernando Rodney, beating the Angels in walk-off fashion

Mathis making positive strides on offense - angels.com
Some offense is nice to see, of course, but what Angels manager Mike Scioscia likes most is the way Mathis is handling a pitching staff that has been among the Majors' best. The Angels are 11-8 in his starts. They're 10-9 when Hank Conger starts and 1-1 when Bobby Wilson is behind the plate.

Still? Lyle Spencer is still writing about Mathis? Yes he is, and he's still using the "he's making positive strides after a lost 2010 season with a fractured right wrist" bit. The only word I can find to describe this post is "fluffer". Come on buddy, jump on the Hank Conger bandwagon! 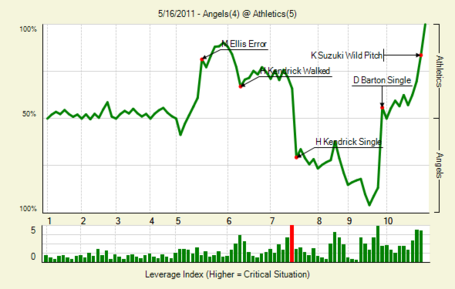 Mets lose David Wright to stress fracture in lower back - Big League Stew - MLB Blog - Yahoo! Sports
The stress fracture was revealed in an MRI taken on Monday. Wright will seek a second opinion on the injury before an official timetable is set, but it's likely some rest and a DL stint will be necessary to get him back to full strength.

All you guys who were right in the middle of writing their "The Angels should trade for David Wright" fanposts can stop right now.

Boston Red Sox put John Lackey on DL with strained elbow - ESPN Boston
Francona was asked if this is a smokescreen for a mental-health break for Lackey, who is dealing with some family issues in addition to his troubles on the mound, leading him to say after his last start that everything in his life was not good these days. "Really not, no," Francona said when asked if the move was made to give Lackey time to clear his head.

The ol' "not-really-hurt-but-need-you-off-the-roster" DL move. Say hello to Scott Kazmir when you see him.

Indians tag Mazzaro with 10-run inning - CBSSports.com
Mazzaro's final line was an even worse nightmare. He went 2 1/3 innings and allowed 14 earned runs, making him the third pitcher since 1947 to allow 14 earned runs since 1947 and the first since 1998.

Speaking of Kazmir. Wait. What? That wasn't Kaz pitching? Nevermind.

Lots of BAD hitters right now - Bob's Baseball Blog
What struck me about this chart is how MANY regulars there are who are not doing ANYTHING with the stick. Below 70 OPS is the stuff of cartoons, yet this chart shows FORTY-EIGHT regulars in that category. (h/t to Baseball Musings)

Do Home Run Hitting Offenses Generally Sport Lower BABIPs? - Beyond the Box Score
This is far from a comprehensive look at the question, but it appears that there is little relationship between HR and BABIP. if a team is going to get away with a low BABIP while still scoring runs it's likely they will do so with home runs and in particular home runs with runners on base.

The Angels currently rank #4 in the majors for BABIP and 18th in home runs. The Angels could be the answer to the opposite of this post's question; Do teams with a high BABIP hit fewer home runs?

Bourjos, Chatwood, Walden to visit OC Dugout - The Orange County Register
Small autograph will be $20 each per player or get all for $50. Large items will be $30 each.

In case you've got some disposable income or just HAVE to get something signed, here's your chance to scratch that itch.

May 17 - BR Bullpen
Events, births and deaths that occurred on May 17.
1939 - The first baseball game ever televised - Princeton against Columbia at the Baker Bowl - is watched by a handful of viewers via W2XBS in New York City. Bill Stern (What? No Vin Scully??) announces the ten-inning victory of visiting Princeton, 2 - 1. Reviewing the game the next day, the New York Times reports: "it is difficult to see how this sort of thing can catch the public fancy."
1970 - During a 7 - 6 Atlanta loss to Cincinnati in the second game of a doubleheader, Hank Aaron collects his 3,000th career hit and his 570th home run. Aaron, the ninth man to amass 3,000 hits, is the first to also have 500 home runs.
1973 - California Angels center fielder Bobby Valentine tries to scale a wall to prevent a Dick Green home run during a 5 - 4 loss to the Oakland Athletics. Valentine catches his spikes in the wall and fractures his leg. The injury will ruin his career.
1979 - With the wind really blowing out at Wrigley Field, the Chicago Cubs and Philadelphia Phillies join in a wild ten-inning slugfest won by the Phillies, 23 - 22. Dave Kingman hits three home runs and collects six RBI for the Cubs while teammate Bill Buckner has a grand slam and seven RBI. Mike Schmidt belts two home runs, including the game-winner in the tenth inning. Bob Boone, pitcher Randy Lerch, and Garry Maddox also homer for the Phillies and Steve Ontiveros and Jerry Martin do it for the Cubs. The eleven home runs between the two teams tie a major league game record. The contest includes 50 hits. In 2010, the MLB Network named it the 20th greatest game of the previous 50 years.
1985 - The Texas Rangers name Bobby Valentine as their new manager, replacing the departed Doug Rader. Under Rader, the Rangers had posted a record of 9-23, the worst in the major leagues. With Valentine at the helm, the Rangers will show some improvement, but will still finish last in the American League West. Valentine calls May 17th "his worst in baseball", also the day he broke his leg.
Happy b-day:
1976 - Jose Guillen, outfielder Miss you...signed Big Mike.