(Ode to) Bloggers Night with the Inland Empire 66ers 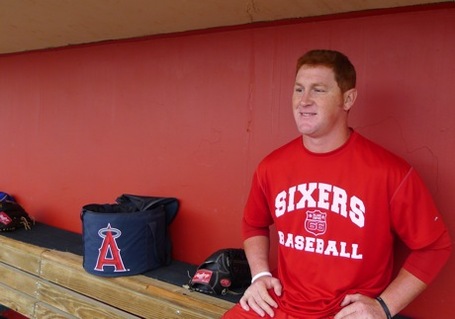 Highlights and notes from Blogger Night below the jump.

Arrowhead Credit Union Park, home of the Inland Empire 66ers, was the site this past Monday for special Ode to Bloggers Night at the ballpark. After checking-in and later discovering that the event suite was not fully ready for the evening, the incredibly helpful staff at the ballpark led me down on the field and in the 66ers dugout where other fellow bloggers (from Halos Heaven and other sites) were conducting an interview with Harold Williams (#34, LHP).

As the grounds crew came out to prep the field for that evening's game, we were greeted by Rob Peters (Graphics and Website Mgr.) and Kevin Shaw (Vice-President of Marketing) and escorted to what would be our suite for the evening. Once on the top floor of the park, every blogger met and shook hands with Bryon Marquez (Director of Business Relations & President of Family Outreach), the man who offered up his suite at the ballpark for use that evening.

The suite was quite the sight to see. A massive collection of memorabilia, both Angels and other teams, along with numerous awards for his work, plus an amazing view of the action from behind home plate in the private stadium seats OR in one of two plush leather recliners behind the glass.

The food was pretty good as well. The usual hot-dog, popcorn, sodas and water but the cheeseburgers topped with bacon and an onion ring? Now that's good stuff, delicious indeed!

On top of that, watching the 66ers bat their entire lineup in the first inning got the crowd pumped with back-to-back-to-back HRs by Michael Wing (#30, 2B), Casey Haerther (#61, 1B and uses Stone Cold Steve Austin's theme as his walk up music) and Kole Calhoun (#14, RF)! It didn't take very long for Visalia Rawhide coach Doug Drabek (yeah, THAT Doug Drabek) to get someone up in the bullpen as Mike Belfiore (#37, LHP) struggled to find the strike zone all evening. Belfiore would later be relieved by Christian Beltre (#23, RHP) in the 5th inning, having gone 4.2 IP, 7 H, 6 R (all earned), 6 BBs, and 3 K and would take the loss. By comparison, 66er starter Kyle Hurst (#63, RHP) pitched 6 innings of scoreless baseball, scattering 7 hits, walking 1, striking out 4 and would receive the win.

During the middle and late innings, I decided to check out the different seating areas around the park as well as talking with the local fans. Just about every seat at ACU Park offers an excellent view of the infield, from behind home plate to behind the dugout or seats down the left/right field line, and a decent to awesome chance at snagging a foul ball.

With two outs in the 7th inning, the Rawhide would score their only run of the game courtesy of a 2-out RBI double by Adam Eaton... who was tagged out at 3rd trying to stretch a double into a triple for the final out of the inning.

66ers would tack on two more runs, in the 5th and 8th inning, and defeat the Visalia Rawhide by a final score of 7-1 which means free Jack in the Box tacos for all in attendance when the 66ers score 7 or more runs at home.

The 66ers did a fantastic job in hosting Blogger Night and a hearty thank you to each staff member I've had the pleasure of talking with and allowing me to hop around from seat to seat around the ballpark. If you get the chance, do visit a minor league ball club and support the team that is unless you have season tickets in the Diamond Club at the Big A in which case you probably don't care either way.

Don't forget to check out the event pictures from the game!