Jered Weaver Is Confusing, The Young and the Struggling. Halolinks.

Share All sharing options for: Jered Weaver Is Confusing, The Young and the Struggling.  Halolinks.

I'll admit it, I have no clue as to what's going on with Jered Weaver. First he dazzles us with 6 straight wins to start the season, only to be followed up with 4 straight losses. In this post (Going deep: Jered Weaver's "dead arm" comment - ESPN Los Angeles), some stat guy for ESPN points out some interesting numbers regarding Weaver's recent performance:

We asked our ESPN Stats and Info department to dig a little deeper and here's the conclusion researcher Hank Gargiulo came up with: Maybe he's just not getting as lucky. Start with the fact that the batting average on balls put in play against Weaver in April was .220. It's .300 this month. Those numbers don't necessarily mean it's all luck, but they hint at it. Here's what Gargiulo says: "Jered Weaver's dominant April might have been aided by a bit of good luck, and he might just be regressing to the mean in May. Weaver has also faced three of the top four hitting teams in the American League in May. His approach has been similar, though. He is throwing about the same number of strikes (64.8% to 64.0%), about the same number of pitches in the strike zone (46.8% to 45.9%) and getting opposing hitters to chase about the same percentage (31.5% to 31.1%).

First, this goes back to the BABIP and luck debate. I'm not going to rehash it again, if you want some background to the story read this, but I have to admit luck could be the reason for Weaver's woes. Typically, the more ground balls a pitcher induces, the better chances for success. In last night's game, Weaver got the 27 Mariner's batters he faced to hit 13 ground balls, the largest percentage for Weaver this season. Even his line-drive rate was low, another indication that hitters aren't teeing off on him.

Second, as noted in the above quote, all of Weaver's stats are in line with his career numbers. At first I thought Weaver's troubles were the result of his giving up more walks. That's not the case, but according to this (A Reminder That Elite Pitchers Don't Walk Guys - Beyond the Box Score) it would have been a good indication that something was wrong. Maybe I'm looking at the wrong numbers:

So while people usually look towards the sheer dominance of velocity and strikeouts when evaluating the best pitchers in the world, that's not really the best way to identify the truly great pitchers. There are lots of decent pitchers that thrive on raw stuff and preventing hitters from getting the bat on the ball. Most of those pitchers also have a nasty habit to hand guys free passes as a result of their hard-to-hit ways. The great ones, though, find ways to get those guys to swing-and-miss without conceding numerous pitches.

Unless there's an injury Weaver is hiding from everyone, I'm pretty sure this is just a spell of...bad luck?

Here's something that tells us as to how Weaver was winning games (Jered Weaver of the Angels has become a strikeout pitcher - Tom Verducci - SI.com):

"If there's one thing that's helped me is just being able to throw my offspeed stuff in fastball counts. To be able to throw my curveball or changeup, say in a 2-and-1 count, and get it over to get back into a count is a big plus."

And if you're not depressed enough there's this: Angels-Mariners Preview - FOX Sports

Scioscia hopes Rodney can fix his delivery - CBSSports.com
Fernando Rodney isn't the only Angels reliever struggling these days, but his problems might be the most frustrating. "He's got to get simple," manager Mike Scioscia said before the Angels' 14-0 loss at Oakland on Tuesday. "He's got to get back to what his strengths are, and he's got to find a consistent delivery. It's something he and (pitching coach) Mike Butcher have been working on.

The Angels' recent bullpen troubles are more than just Fernando Rodney and his lost release point, but there is this:

Is Angels bullpen throwing away year? - The Orange County Register
Maybe expecting a guy who can't wear his hat straight to throw a baseball straight is asking too much.

I typically don't link to nozzle Jeff Miller posts, but his line about Rodney's hat was pretty good.

No offense again means no chance for Angels - The Orange County Register
They ended Wednesday's game in Seattle having been held scoreless over their past 21 innings with a total of eight hits (all singles) in that time. They have lost six of their past seven games, scoring a total of 16 runs in those seven games.

Angels have no choice but to ride with their youth - CBSSports.com
Eleven players on the current 25-man roster have less than two years of major league service time, and the Angels are living with the ups and downs that come with that. "The long and short of it is we've got a lot of youngsters who are getting their opportunity," manager Mike Scioscia said. "There's a learning curve, and we've lost some games to the learning curve. But I think the bottom line is we're a team that will improve as the year goes on."

Could it be the Angels' organization has a "let's see what this year brings, but really go for it in 2012" attitude? You know, if they get lucky this season with their youth...great. If not, it's a great building block for the future.

Hamilton homers in rehab assignment - CBSSports.com
Josh Hamilton homered in his return to baseball, a rehab assignment with the Double-A Frisco RoughRiders on Wednesday night. Hamilton, who hasn't played since April 13 when he suffered a non-displaced fracture of his right humerus, went 2 for 4 with a two-run homer in his second at-bat of the game. He also singled in the fifth inning.

What's sad about the recent Angel slide is the last couple weeks might have been their chance to put the Rangers into a really deep hole in the standings. Since April 25th, both teams have gone 9-12. 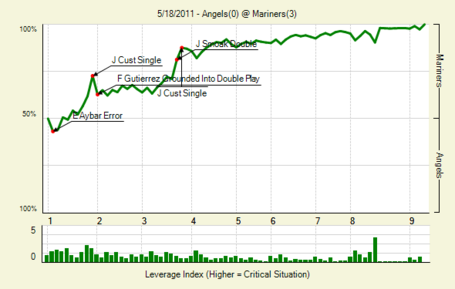 Far from perfect: Armando Galarraga dumped by Diamondbacks - USATODAY.com
The Diamondbacks designated Galarraga for assignment after another in a line of poor starts. He was 3-4 with a 5.91 ERA in eight starts, the final straw coming Monday when he allowed eight runs -- five earned -- in five innings of a loss to the San Diego Padres.

I've often wondered what goes into the decision when teams are looking at picking up a player. Why wouldn't a team like the Angels look into adding Galarraga after he is released (if he gets released) if all they'd have to pay him is the league minimum? Admittedly, Galarraga isn't great, maybe he isn't even good, but what's the risk of taking a look?

Jamie McCourt expected to ask judge to order immediate sale of Dodgers - Los Angeles Times
Jamie McCourt is expected to argue that the actions of Frank McCourt—her ex-husband--have endangered the value of the Dodgers and that the judge overseeing the couple's divorce should put the club up for sale so both parties could reap the maximum value for the primary asset of their marriage, according to the people familiar with the proceedings.

Which leads to this:

Dodgers fans ask Mark Cuban to please buy their team - Yahoo! Sports
With the Frank McCourt saga wearing thin on fans' nerves, there's now an organized effort to get Cuban, owner of basketball's Dallas Mavericks, to snap another team for his holdings. The movement now includes a website, stickers passed out at games and, presumably, a painted water tower with their slogan if they can raise enough funds.

Just like the Angels are wasting these days to put some distance between themselves and the Rangers, the Angel ownership is wasting this situation in putting themselves into the hearts and minds of Los Angeles.

Economics of Baseball: A problematic vesting option - Beyond the Box Score
Still, trading him and $3.5 million for basically nothing would be a good deal for the Mets, because ensuring they won't have to pay Rodriguez $17.5 million in 2012 or deal with his agent filing a grievance should be their number one priority.

95 Runs - baseballmusings.com
The majors played 15 games Wednesday night, producing a total of 95 runs. Since the majors expanded to 30 teams in 1998 and 15 games days became the standard, that’s the fifth lowest run total for exactly that number of games.

Where'd all the runs go?

On baseball's payrolls, parity - CBSSports.com
Just so we're clear, if you said the top-10 payrolls are large market, next 10 are middle and last 10 are small, here they are: Large: Yankees, Phillies, Red Sox, Angels, White Sox, Cubs, Mets, Giants, Twins, Tigers Middle: Cardinals, Dodgers, Rangers, Rockies, Braves, Mariners, Brewers, Orioles, Reds, Astros Small: A's, Nationals, Blue Jays, Marlins, Diamondbacks, Indians, Padres, Pirates, Rays, Royals (see USA Today for the full list) Obviously, it's far too rudimentary to define teams in this manner, but I'm frankly tired of hearing about how the Twins are a small market -- not to mention the Cardinals, Brewers or Reds. They aren't small. Enough with that talk. The Rays are small market. The Royals are. Oh, and the Braves are constantly accused of being a large-market teams by fans on message boards, too. That isn't true either.

I thought big-market/small-market was determined by population and not payroll.

May 19 - BR Bullpen
Events, births and deaths that occurred on May 19.
1970 - The lawsuit filed by former St. Louis Cardinals All-Star Curt Flood against Major League Baseball begins its hearing in federal court. Judge Irving Ben Cooper presides over the case, which will result in the upholding of baseball's reserve clause.
Happy b-day:
1952 - Dan Ford, outfielder