The Russell Branyan Impact, Trout Might've Been an Option. Halolinks

Share All sharing options for: The Russell Branyan Impact, Trout Might've Been an Option.  Halolinks

(Personal note: My family and I will be at tonight's Angels-Twins game in Minneapolis. If any of you other mid-west Angels fans will also be there, be sure to find me in section 316. I'll be the guy wearing the 2002 "Anaheim" road jersey. If you're a sniper I'll be sitting in section 433.)

There's been a little talk about the Angels bringing up uber-prospect Mike Trout. This was before the Angels signed Russ Branyan, but still it's an interesting topic. In this post (Angels aren't ready to fish for Trout yet - Yahoo! Sports) it pointed out the pathetic output the Angel have received from their left fielders so far this season:

I think it's pretty safe to say that 19 year-old Trout could at least match those numbers as he's currently hitting .306 for Class AA Arkansas with six home runs, 17 RBI, 28 runs and nine stolen bases in 40 games. From Sam Miller's post (Scioscia: Trout isn't an option - for now - The Orange County Register):

"Is Mike going to come up here and be hitting .310 or .320? I think that's a huge risk to take when you're talking about his upside." And then the exciting part: "He's bridging that gap. Maybe in a month if you're asking me we're going to be having a different conversation." A month. Trout probably won't be up in a month – he might not even be up for another year – but Scioscia could at least consider considering calling up Trout in a month.

As I wrote above, this was before the Angels signed Branyan. The plan now is for Branyan to platoon with Trumbo at first and to DH. The more at-bats Branyan gets at DH means the more we'll see Bobby Abreu in left field. The player impacted the most by bring up Trout would be Mark Trumbo. However, in another scenario, if Peter Bourjos continues to have problems, Trout could be an option in center field. This option is pretty unlikely, but if the Angels do decide promoting Trout is their best option, Bourjos might be the player sent down. Quick side note, does anyone else think it's interesting that it's Scioscia doing the talking about roster moves? I wonder who has more impact on the team's moves, Reagins or Scioscia.

Here's some good news for the "clubhouse chemistry" people. In this post (Angels pick up left-handed slugger Russell Branyan - angels.com) Branyan said all the right things:

"Other teams called," Branyan said. "I like this situation. I like the ballclub. I like the AL West. A lot of factors played into it." The opportunity is there for Branyan to get fairly consistent work, even if he's not in the lineup every day. "I'm a guy who can give this team some left-handed pop," Branyan said. "I'll play some first base. If Bobby starts in the outfield, I can DH. I'm not looking to start or play every day. If I can help the ballclub score some runs, it'll be very exciting."

Angels sign Branyan, hope for power reward - The Orange County Register
On playing the outfield: "Not likely. Likely scenario is he plays some first, some DH, gives us an opportunity to get Bobby (Abreu) out in left field a bit more. It'll deepen our lineup to have both those guys in the lineup at the same time."

Branyan is the type of player the Angels have been missing for several seasons, a utility-guy who can change the game with one swing.

Off Base breaks down the owners of all 30 MLB teams - ESPN
3. Arte Moreno, Angels The Angels have reached the postseason five times in his eight years as owner; he invests heavily in the team; and his club has passed the Los Angeles Dodgers of Divorce Court as the best franchise in southern California. True, he could spend that money a little wiser (Gary Matthews Jr.?) but who cares? The man lowered beer prices when he took over! He should be commissioner!

This is a hard thing to comment on for me. It's obvious who the crappy owners are, but how do you rank the good owners? Fan experience? Team performance? Moreno scores high for both of these traits, but how much does this past off-season impact his future rankings? His "we'll spend whatever it takes" comment, plus the team's strange acquisition of Vernon Wells could hurt his reputation with fans. Oh, and one other thing...the beer price shtick is getting old. Almost as much as the stupid team name jokes.

Jose Reyes likely to command big salary but not Carl Crawford deal - Jon Heyman - SI.com
The Mets' longtime owner claimed in his now infamous interview in The New Yorker magazine that Reyes, the Mets star shortstop whose contract runs out at season's end, wanted "Carl Crawford money,'' and went on to opine that Reyes "won't get it.''A couple of the execs said they actually favor Reyes over Crawford, but they also apparently considered the injury history that Fred Wilpon stressed in his New Yorker quote ("he's had everything wrong with him,'' he said, unflatteringly). Said one American League executive: "I've always liked Reyes more. Switch-hitter. More important position. Younger. More explosive.''

Reyes could be the answer to the Angels lead-off hole. Maicer izturis is doing a fine job so far this season, but I doubt he's a long-term solution. If the Mets are willing to deal Reyes, which they probably are, Reagins needs to give them a call.

Spitballing: The Classic Second-Guess -Baseball Prospectus
Here’s the situation: your starter has gone eight scoreless innings, but it’s a save situation. Do you trot him back out there for the ninth, or do you bring in your closer for the final three outs?

Interesting question. My answer: It depends on who's on the mound. Replace Weaver in the 9th after he's been tossing a shutout? No way. Tyler Chatwood? Probably. Or at least go batter-to-batter with him depending on how well he's been pitching. 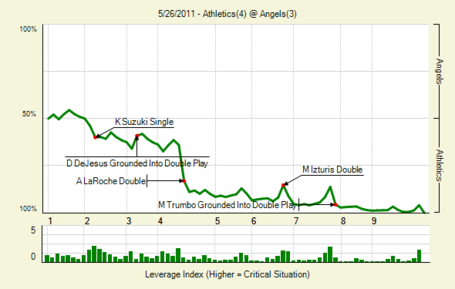