It wouldn't be a game in Boston if there wasn't some sort of controversy about the pitch calling behind the plate. According to this article - Weaver zips his lips after call goes against him - The Orange County Register, Weaver might have had a problem with home-plate umpire Scott Barry's strike zone, but he wasn't going to talk about it:

After having a critical strike call go against him in the fifth inning of the Angels' 9-5 loss to the Red Sox on Monday night, Weaver was asked if the strike zone tends to shrink for visiting pitchers in Fenway Park. "Not going to feed you guys what you want. Finito," Weaver said, keeping his mouth exaggeratedly closed during prodding and then ending the interview session.

If you look at the two charts below (thanks to brooksbaseball.net), Weaver had 4 pitches within the strike zone that were called balls. Also you'll notice he had 4 pitches outside of the strike zone that were called strikes. I don't think you'll hear Weaver complain about those calls, but he does have apoint with the four within the zone. The number of calls missed isn't really the issue here, it's the timing of the missed calls. It's not such a big deal if the missed call is the first pitch of an at-bat leading off a 1-2-3 inning, but the pitch Weaver took issue with was a missed third strike call to Jason Varitek in the 5th inning that would have been the second out of the inning. Instead Varitek went on to walk and the Sox scored 2 runs to take the lead. 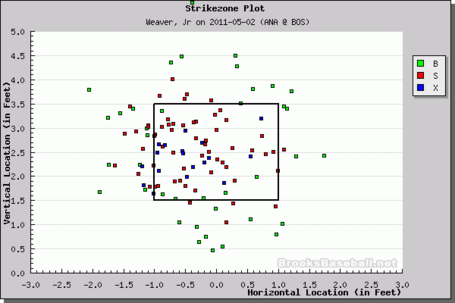 For you conspiracy theory folks, here's Buchholz's chart from last night. He had a few that were missed too, but as I wrote above, it's all about the timing... 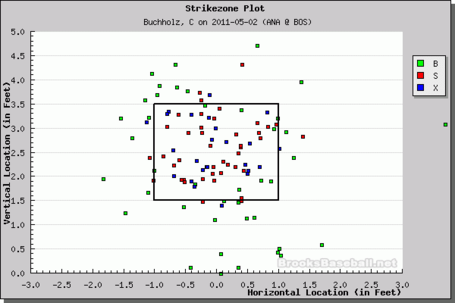 Instead of worrying about the umpires, maybe the Angels should be concentrating on hitting. Within this preview of tonight's game (Angels-Red Sox Preview - FOX Sports), this hideous fact stands out:

The Red Sox's domination of the Angels includes hitting .293 with 21 home runs while holding a 97-46 scoring advantage over the last 15 meetings. They've been even better in the past eight as host, batting .322 with 13 homers and 60 runs.

Yeah, the Angels have been outscored by Boston by FIFTY-ONE RUNS.

Conger's All Right Against Righties - CBSSports.com
"We know he's a switch hitter," Scioscia said jokingly. "Hank has won at-bats because of how well he's doing on the defensive side. "Defensively, if you believe they're interchangeable parts, you can look at some things offensively."

Defense is important to Scioscia. So much so he's willing to downgrade his team's chance of scoring runs.

Angels notes: Angels' Peter Bourjos still has some learning to do - latimes.com
And while he's batting .297 and leading the majors in bunt hits (five) and triples (four), he's also struck out six times in his last three games, giving him a team-high 32 in 101 at-bats. "Offensively I have to do some learning," Bourjos said as he sat, shirtless, in front of his locker after a three-strikeout game. "I've still got to come up with a better two-strike approach. I think that's going to come over time. Hopefully it will come soon."

Yes, the strike outs are a problem that needs to be addressed, but you know what I have a harder time wrapping my head around? Why does Kevin Baxter have to mention Bourjos is sitting shirtless?

Morales curtails hitting, will work on running - angels.com
"We need to get him running," Angels manager Mike Scioscia said before a four-game series with the Red Sox opened at Fenway Park on Monday night. "He's not hitting now. He might be [hitting] by the weekend. When that [running] program is feeling better, he can take a leap forward.

There's also a bit about Rich Thompson in the above link. Thompson is doing very well, I wonder when (or if) he'll be used in higher leverage situations. Hopefully very soon.

Video: Do not mess with Fenway Park security | HardballTalk
I have no idea when this was taken — from the low number of views of the video on YouTube, I’m guessing recently — but watch this idiot fan get utterly destroyed.

I'm pretty sure this happened last night. I seem to remember a break in the action when the cameras were showing the Angels dugout, but you could hear cheering from the fans indicating something was going on on the field. Kind of a crappy video, but the guy does get leveled pretty good if you watch closely. 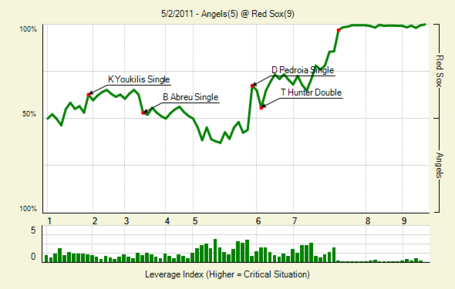 Really sad news from the Angel family. Our deepest sympathies to Heather's family and friends.

One game in the bigs: 10 short baseball careers - Baseball: Past and Present
Travers, a seminary student, suffered the worst complete game loss in baseball history, allowing 24 runs, still a record.

Ball Four tracers - The Hardball Times
In the early 1990s, Bill James wrote an annual post-Abstract work called his Baseball Books that featured tracers. A tracer is a story an old ballplayer remembered from bygone days that James would research (or rather, have his then-assistant Rob Neyer research) and see if he can locate the event in the historical record. It's tricky as memories get hazy and distort some details of what happened.

This is really cool to me. Ball Four is the greatest baseball book ever written, and I think it's fun to go back and try to find out which game someone is talking about (and if the story is true). This article combines the two.

Here are some quick links that I found that I thought were interesting...

Ethier halfway to DiMaggio; streak at 28 - CBSSports.com
The Dodgers' Andre Ethier has extended his hitting streak to 28 games -- halfway to Joe DiMaggio's record.

Where April's Best Starter Ends Up - Beyond the Box Score
On the heels of his excellent 2010, Weaver has established himself as one of the best young pitchers in the game. What does such a start portend for the full season though? I thought it might be fun to look at how April's top pitchers from the past few seasons finished the year (mainly using fWAR).

Chart detailing how batters fare after every count. 2002-2010 MLB data was used in compiling this.... - Beyond the Box Score
Your best source for smart baseball analysis from the fan perspective.

FanGraphs Power Rankings – 5/2/11 - FanGraphs Baseball
A team’s WAR% is given weighting equal to the percentage of 2011 season that the team has played. Right now, teams fall in the 15-18% range, as they have played between 26 and 29 games. As the season progresses — and we learn more about each team’s true level of talent — the WAR% will receive a greater weight with the FAN% receiving less weight. This system essentially acts as a built-in regression for current performance so that we don’t overreact to small samples of data, but it also allows for how teams have done to influence our evaluations of their abilities.

MLB players turn to Twitter in wake of bin Laden news - USATODAY.com
Great day for the US. Don't forget about those who fell from his devilish acts. Be blessed and all Goodnight. -- torihunter48 (Torii Hunter, Los Angeles Angels)

May 3 - BR Bullpen
Events, births and deaths that occurred on May 3.
2005 - With a 9-0 margin, a state legislative committee votes to approve a bill which will require the Los Angeles Angels, formerly known as the Anaheim Angels, to disclose on all promotional materials, including tickets, ads and team publications, that the team is based in Anaheim. Using the example of an orange juice company selling OJ that contains no oranges, California Assemblyman Tom Umberg, the bill's sponsor, says he is trying to promote truth in sports advertising.