The Effects of Age, Angel Rookie of the Year. Halolinks

Share All sharing options for: The Effects of Age, Angel Rookie of the Year.  Halolinks

Is it possible that baseball personnel might be human? Obviously, they're human, but what I mean is; Could one's opinion about life and aging be an impact on the decisions they make regarding baseball operations?

In this post (The Slow Decline of Alex Rodriguez - FanGraphs Baseball), Steve Slowinski writes about the effects aging has on a player. Not so much the physical part, but the mainly effect of fans seeing their favorite player age:

I remember a time when Alex Rodriguez was the yearly consensus first pick in fantasy baseball. People would try to argue for other players depending on the year, but for a long stretch of time in the middle of his career, A-Rod was the best player in baseball.

Could age also have an impact on General Mangers and Owners? Sure, owners can get senile, but older people, and I think men in particular, get more nostalgic as we age. If an older GM remembers a player, say Bobby Abreu, it's possible that their nostalgia can influence their decisions. By the way, last Friday night at the Angels-Twins game, my family and I were watching the pregame routines of the players and there was this brief conversation:

Mrs. WiHaloFan: Who's the old, fat guy running in the outfield?
Me: Uh, Bobby Abreu.
Her: oh.
Me: yeah.

Tony Reagins and Mike Scioscia aren't old, but the club has seen an infusion of youth in their lineup, it might be time for a youth movement in the front office.

Getting old sucks. Regardless of what we do, we can’t stop our bodies from aging and slowing down. Muscles get weaker, it gets harder to get in shape, and our reflexes slowly fail us. Time cares nothing for our fond remembrances or youthful delusions; in the words of Joe Posnanski, age is undefeated.

Mark Saxon isn't Lyle Spencer. Can you picture Lyle writing something like this (Are the Angels blocking their top prospect? - ESPN Los Angeles):

As for Abreu, he is a vital cog in this Angels' offense because he actually gets on base, but allowing that option to vest would be just another poor long-term decision for a GM that seems to be specializing in them.

Is Reagins' time with the Angels coming to a close?

A Quick Rookie Of The Year Update - Beyond the Box Score
4) Jordan Walden, Los Angeles His command is still shaky, but he's armed with fastball that touches triple digits and a legit out-pitch in his slider, so things are still going well so far for the big reliever. He's 10-for-13 on save opportunities for the season since taking the closer's job from Fernando Rodney and doesn't appear likely to vacate the role any time soon. Among AL relievers with 20+ innings pitched, only Mariano Rivera, Jonathan Papelbon and Glen Perkins have posted better FIP figures than the 23-year-old Walden.

Oh wait, sorry about that.

Hunter drives a solo shot to center - MLB.com
Torii Hunter launches a solo homer to center field, pulling the Angels within one run in the top of the seventh

Bourjos lifts a solo homer to left - MLB.com
Peter Bourjos drives a solo homer over the left-field wall, cutting the Royals' lead to 8-7 in the top of the eighth

Trumbo jacks a solo shot to center - MLB.com
Mark Trumbo lifts a long homer over the center-field wall, pulling the Angels within two runs in the top of the eighth

Hunter puts Angels ahead with clutch homer - MLB.com
Torii Hunter puts the Angels up 9-8 with a two-run homer in the top of the ninth, the 999th and 1,000th RBIs of his career

If you don't know, how are you confident?

Introducing the Traditional Manager Index - Beyond the Box Score
Well, I don't have a stat to help you assess managers, but I have come up with a junk stat that I think will at least tell us something about managers' personalities. I call it the Traditional Managing Index, or TMI*, and it's very simple. It consists of two statistics that can largely be attributed to managers.

Not very informative unless you thing bunts and intentional walks are a way to rank managers, but it's a pretty chart.

Speaking of charts, THE CHART: 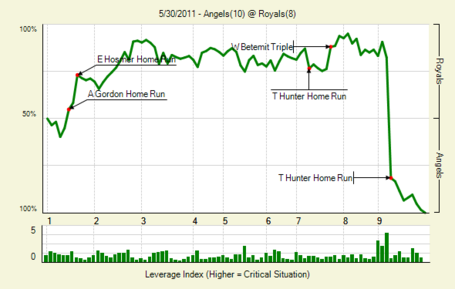 White Sox Designate McPherson For Assignment - MLBTradeRumors.com
McPherson appeared in 11 games with the White Sox and collected a pair of singles in his 15 plate appearances. The 30-year-old had a .305/.366/.458 line in Triple-A Charlotte before getting the call to the Majors.

Fifteen plate appearances? I wonder what would have happened if he went 5-for-15? What if he collect 3 hits in his next 3 at-bats? He'd be batting .278. Is that release worthy?

Yanks' Colon tosses four-hitter vs. struggling A's - CBSSports.com
Bartolo Colon believes he's a better pitcher at age 38 after missing an entire season than he was during his harder-throwing, Cy Young award winning days. He sure pitched that way against Oakland, throwing a four-hitter for his first shutout in nearly five years as the New York Yankees beat the Athletics for the eighth straight time, 5-0 on Monday.

Play at plate seals Rangers' victory - MLB.com
5/29/11: Mike Napoli slides under Brayan Pena's tag to give the Rangers a walk-off win against the Royals.

This has nothing to do with the play having Napoli in it. I just thought it was crazy.

There was another fire at Dodger Stadium this morning - HardballTalk
Now if you’ll excuse me, I’m off to continue work on my novel. It’s a fantastical, fictional story about a businessman who buys an NBA team called the Los Alamos Diggers, runs them into the ground, is taken to the brink financially and then collects millions on the insurance when his arena burns down in a mysterious fire.

You know what? I think McCourt just might be that stupid.

May 31 - BR Bullpen
Events, births and deaths that occurred on May 31.
1938 - Lou Gehrig plays in his 2,000th consecutive game and collects a RBI single, helping the Yankees defeat the Boston Red Sox, 12 - 5.
1964 - At Shea Stadium, the New York Mets and the San Francisco Giants play the longest doubleheader in major league history - 9 hours, 52 minutes - with the help of a 23-inning game in the nightcap that is won by the visiting Giants, 8 - 6, on run-scoring hits by Del Crandall and Felipe Alou against Galen Cisco. The game takes 7:23 to play. In the opener, Juan Marichal pitches a complete game and Orlando Cepeda goes 3 for 4 with two runs and one RBI for a Giants 5 - 3 victory.
Happy b-day:
1905 - Peaches Davis, pitcher (d. 1995)