Are Strikeouts Too Much?, One More In Boston. Halolinks

Share All sharing options for: Are Strikeouts Too Much?, One More In Boston.  Halolinks

(I've got an early morning appointment today, so here are today's links without comment)

Angels try to cut down on strikeouts - ESPN Los Angeles
"We've got a lot more strikeouts than I can ever remember," Hatcher said. Hatcher has worked with many of the Angels' young hitters on widening their stances, choking up and having tougher at-bats when they get to two strikes. 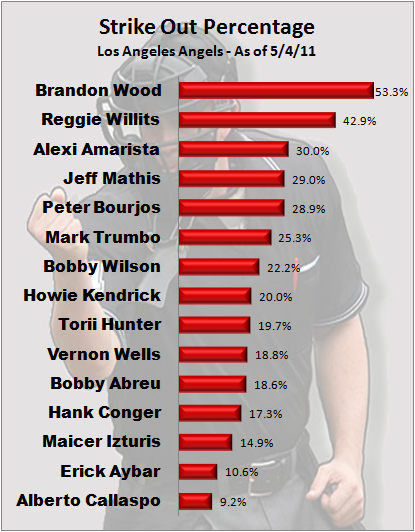 Angels-Red Sox Preview - FOX Sports
Los Angeles still hasn't beaten Lackey (2-3, 5.65 ERA), the 6-foot-6 right-hander who signed with Boston prior to the 2010 season, following 102 wins over nine seasons with the Angels. Lackey has compiled a 2.45 ERA while winning all four of his starts against his former club, including a 7-0 victory April 24 in Anaheim in which he allowed six hits over eight innings.

Scioscia won't stress over strikeout total - MLB at CBSSports.com
"We're striking out a lot," Scioscia said. Indeed, the Angels went into Wednesday's 5-3, 13-inning win over the Red Sox having struck out 234 times in their first 30 games this season. That total led the AL and was topped by only two teams -- the Pirates and Padres, both of whom have a pitcher batting nightly to pad their totals.

Angels FYI: Angels' offensive woes are multi-pronged - latimes.com
The Angels' offensive woes this season go beyond the .227 batting average with runners in scoring position they took into Wednesday's rain-plagued game with the Boston Red Sox. They also started the game having struck out more often and hit into more double plays than any team in the American League. And that has made finding a solution more difficult.

They got the blues: Dodgers are having a lousy 24 hours - Yahoo! Sports
It's already been a rough season for the Los Angeles Dodgers and their fans (on and off the field), and it looks to be getting even worse. Here's a breakdown of the you-know-what storm that's rained down on the team in just the past 24 hours.

Dodgers lack funds to meet payroll - latimes.com
If McCourt were to fail to meet payroll, the league would cover the expenses and would have the option to seize the Dodgers from him

Who could Giants go after for shortstop? - CBSSports.com
Maicer Izturis / Erick Aybar / Alberto Callaspo: The Angels love their infield depth, and it's been a major help so far. Still, if and when Kendrys Morales returns to first base, someone has to hit the bench.

The BP Wayback Machine: The GM Starter Pack - Baseball Prospectus
Some recurring themes come up during the evening, and one of them is often: "What skills does a general manager really need?" The question that inevitably follows is: "What books do you think a GM should read when they first get the job?" It's a good question, so I thought I'd make some suggestions here. I'm going to stay away from baseball books, including our own, and focus instead on the first books anyone should they read if they're going to be serious about their business. Many of these books are applicable to a number of industries, but I believe they're particularly relevant to running a major league club. 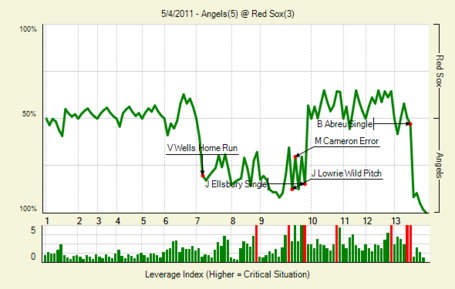 The Sox Ruined My Lucky Day - Bugs & Cranks
So I picked this particular Red Sox $5 scratch-off, thinking that any outcome would be satisfactory: * I win $1,000,000 – didn’t happen * I win any cash – didn’t happen either * I win Sox Season Tickets for life – the irony, but that was also a bust * I lose, and I get to resent the Red Sox even more for ruining my lucky day – bingo.

Webb pulled from rehab start - CBSSports.com
Former Cy Young-winner Brandon Webb's comeback has hit a snag in rehab. With his velocity down, the Rangers will not have him make his scheduled start in extended spring training on Thursday, the team announced

Ump: 'We may have erred' - CBSSports.com
Umpire Joe West said he "may have erred" in reversing a call in the Jays' 3-2 victory over the Rays on Wednesday.

MLB needs harsher penalties for DUI arrests - MLB News | FOX Sports on MSN
If you think baseball is too soft on alcohol, you’re right. Change is coming. But heaven knows how many more players will be arrested on suspicion of DUI before the problem is addressed in the next collective-bargaining agreement. Sources in both management and the players’ union said Tuesday that a new alcohol policy likely will be part of the new CBA. It’s about time: Under the current program, which expires on Dec. 11, alcohol is not even classified as a "drug of abuse." Yet, Choo likely will avoid suspension even if he is found guilty. Ditto for the five other players recently charged with DUI — the Indians’ Austin Kearns, Athletics’ Coco Crisp, Mariners’ Adam Kennedy, Tigers’ Miguel Cabrera and Braves’ Derek Lowe.

Bud Selig on good and bad news about MLB's attendance figures - Tom Verducci - SI.com
Far from worried, Selig offered a bold promise to SI.com: major league attendance will rise this year. "Do I have any concerns? No. None whatsoever," he said. "We'll be up. All I can tell you is I'm bullish where we are and where we'll finish."

Prospectus Q&A: Matt Capps - Baseball Prospectus
Matt Capps is closing in Minnesota, and he’s doing so with a more advanced approach than he brought to the mound when he first broke into the big leagues with the Pirates in 2005. The 27-year-old right-hander has always been a hard thrower, but more recently he has become a better student of the game, utilizing video to gain a better understanding of his mechanics.

Scout: 'Almost sad' to watch Jeter - SI.com
One American League talent evaluator said, "It's almost sad to see how fast [Jeter] has lost it. Everything looks slow, soft, old. I hate saying it, because everyone respects Derek. But it's true."