Angels Shut Out And Blown Out By White Sox

Share All sharing options for: Angels Shut Out And Blown Out By White Sox

The White Sox have been described as an unlucky team by many national pundits thus far in the season. A quick glance at their record and the (hitting) talent on their roster, and one would probably agree with the pundits for once. The White Sox were anything but luckless tonight blowing out and shutting out the Angels tonight 8-0.

The story was the same as when the Angels usually struggle: lack of hitting with RISP, no XBH to speak of (first was by Bobby Wilson in the 9th), and SP troubles. Angels need one of these 3 to win games, and none of them were there tonight.

Ervin Santana gave up 5 ER and 2 HR in 6+ innings of work. He was locating his pitches poorly all night, and his two biggest mistakes (leaving two split fingers up in the zone) led to two HRs. The Angels starting pitching has to keep them close, and that just wasn't the case tonight with Santana.

Trevor Bell let his first two runners on and gave up a 3-run homer to the third. Bell also has not looked too great in his limited amount of time with the big club; however, he essentially came in for mop-up duty here, and it's hard to lay the onus of this loss on him.

The Angels offense had zero XBH until a Bobby Wilson double in the 9th. Conversely, the White Sox had 7 XBH (4 in the 7th). Hopefully this means Bobby Wilson gets more work (at the expense of Jeff Mathis of course), but he was also a mop-up replacement which means he's not sniffing a start anytime soon.

The offense threatened only twice for the entire game. In the 2nd, Vernon Wells reached first and advanced Callapso on a nice little hit-and-run. The next play Callapso showed the frustrating ineptitude the team frequently displays on the basepaths, and got caught in a pickle on a routine sac fly. There really are no words.

The Angels threatened again in the 6th. Aybar singled with 1 out, and then promptly stole his 9th base of the year (he's 9 for 9). Bobby walked with his 36th BB on the year. And then Torii Hunter promptly grounded into his MLB-leading 12th double play of the year.

The big story tonight amidst the total domination is Vernon Wells's groin. He strained it pretty badly in the 4th inning. My WedMD research skills say a strained groin can take 4-6 weeks to recover from. I will never take solace in a man's injuries, and I wish him a speedy recovery, but a lenghty rehab stint. That will probably mean a trip to the DL.

Who will be his replacement? Alexi Amarista? Reggie Willits? A Mark Trumbo move to left? Amarista hasn't been too great in his limited time. Willits does not belong on any major league roster. Trumbo would probably struggle defensively in left. Not the greatest of choices. Maybe the Angels will shock everyone and call up Mike Trout? It's really anyone's guess at this point. 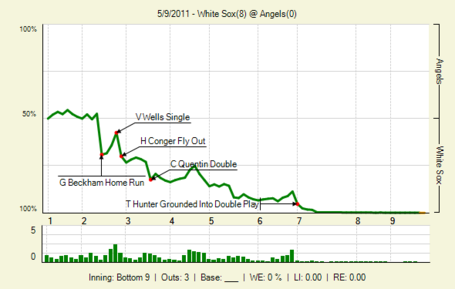