Two 66ers are Angels Players of the Month

Share All sharing options for: Two 66ers are Angels Players of the Month

My vote for organizational player of the month was "Absence of Vernon Wells" but at least two guys in the organization have been motivated by all the collegiate drafts... Press release out of San Bernardino follows... 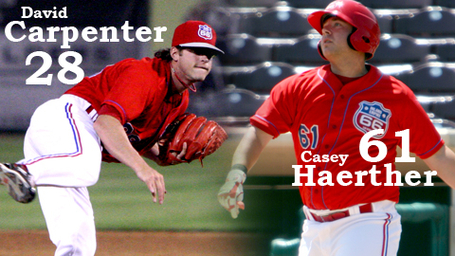 "They have been working very hard, and their adjustments are showing up in the game" said Inland Empire 66ers Manager Damon Mashore of Carpenter and Haerther.

Casey Haerther hit .333 in May with three home runs and a team best 20 RBI. "Casey put together a tremendous month," said Angels Director of Player Development Abe Flores. "He is a quality offensive player who has stepped up recently."

Haerther said he’s excited to receive the award for player of the month for the entire Angels farm system. "It’s an honor to win the award with how good the organization is," said Haerther. "I’ve been making a lot of adjustments, and have worked hard with [66ers Manager] Damon [Mashore], and it’s showing up in the games."

David Carpenter picked up three saves in May, and allowed just one run in 11 innings over ten games for Inland Empire, a 0.82 ERA. "Carpenter has been a consistent and effective pitcher all season and his performance in the last month reflects that," said Abe Flores. "He seems to have carried the momentum from his time with the big league club during Spring Training."

Carpenter was just named the 66ers lone representative for the California League vs. Carolina League All Star game later this month, but said winning this award is the bigger honor. "This one means a lot more to me because it includes the whole Angles organization," said Carpenter. "There’s just more pride in receiving this award."

The 66ers, including Angels organizational players of the month David Carpenter and Casey Haerther, wrap up the home portion of the first half of the season this weekend against the Lancaster JetHawks. Saturday, June 11th, Adrian Beltre bobbleheads will be given away but there is a limited supply. On Sunday, June 12th the 66ers will host the last pre-game kids clinic of the season. A paid admission to the 1:05 PM game is all that is required for kids to get instruction on the Arrowhead Credit Union Park field from the Inland Empire 66ers.

Inland Empire 66ers tickets are on sale now both at the 66ers box office and online at www.66ers.com.