Vernon Wells Hits, Must Be Hatcher's Fault...or Not. Halolinks

Share All sharing options for: Vernon Wells Hits, Must Be Hatcher's Fault...or Not.  Halolinks

Did anyone see this coming? Although I like it, I like it a lot, I'm not going to get too excited over Vernon Wells' great game. Here's the post (Vernon Wells has a breakout game in Angels' 6-3 victory at Seattle - latimes.com):

General Manager Tony Reagins, who is feeling heat for his January trade that brought Vernon Wells and the four years and $81 million left on his contract to Anaheim, needed this. Hitting instructor Mickey Hatcher, the object of harsh criticism from fans calling for his firing amid the drought-like conditions surrounding the team's offense, needed this. But most of all, it was Wells who needed what the struggling left fielder provided Monday night, a two-homer game that lifted the Angels to a 6-3 victory over the Seattle Mariners at Safeco Field.

If Reagins and/or Hatcher were on any type of "bubble", how much time did Wells' game buy them? A week? Two? As stated in a few different posts and comments, Hatcher's not about to lose his job (L.A. Angels: Mickey Hatcher's job is not in jeopardy - latimes.com):

"It hasn't come up internally," Manager Mike Scioscia said when asked whether Hatcher's job was in jeopardy. "Mickey does a terrific job with these guys. Like anything, if we're not doing our jobs, someone else will get the opportunity, but that's not the case with Mickey."The Texas Rangers and Florida Marlins recently fired their hitting coaches, and neither was struggling to the extent the Angels have. But neither Scioscia nor his hitters think Hatcher is part of the problem.

It is interesting though that several people mention how hard Hatcher works. You know what? So what. Maybe he's working really hard at being a bad hitting coach.

Here's what Reagins' team has done this season (The year in shutouts - HardballTalk):

That some good company the club is hanging out with. By the way, the Angels are paying $138,543,166 for this performance while the other three teams mentioned above are paying $154,773,068 combined.

It's not just the Angels who are finding hits hard to come by (MLB Total Hits Per Game: Down Across the Board - Beyond the Box Score): 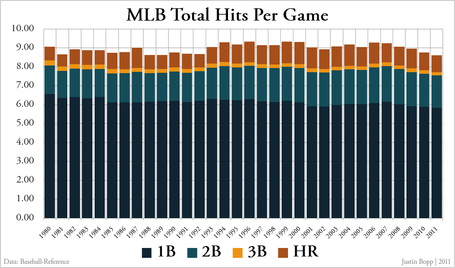 There are also graphs breaking down the numbers by hit type.

Figgins went into Monday night's game against the Angels batting .189. He was booed when he popped up in his first at-bat, booed when he made an error at third base in the second inning, booed every time he stepped to the plate — cheered when he doubled to right in the fifth.

And this guy too (Trying to get in the head of the most reviled pitcher in the AL East: John Lackey - Grantland):

After he got showered and dressed, including the pink bracelet he now wears on his wrist in tribute to his wife, Lackey turned toward the cameras with a very different look on his face this time around. "I feel like I'm still building," he said, "but for the first time in a while, I feel like I'm going in the right direction." Most important, John Lackey was smiling.

Regardless of how bad this past off-season went, Reagins did an okay job after 2009 by not re-signing Figgins and Lackey.

Here's someone I don't feel sorry for (Lenny Dykstra pleads not guilty to 25 charges - HardballTalk):

Dykstra appeared dazed in court, according to The Associated Press report. When asked if he understood the charges against him, he replied, "I don’t understand it, but I understand them.Dykstra is being held in Los Angeles County Jail after being charged with 25 misdemeanor and felony counts of grand theft auto, attempted grand theft auto, identity theft and other crimes. If convicted of all counts, he’d face a maximum of 80 years in prison.

If the world were a just place, the guy responsible for this mess would be sharing a cell with Lenny (Dodgers' June 30 payroll looms large in McCourt case - latimes.com):

The Dodgers appear to have "no chance" to meet the June 30 payroll without a cash infusion from a new television contract, according to a person familiar with McCourt's finances but not authorized to discuss them. If McCourt misses payroll, Selig could make the payments for him, seize the team and put it up for sale.

Here's a good post-game write-up of how things should be (Rays Win 2-1 Over Tigers As Game-Changing Call Overruled By Instant Replay - DRaysBay):

Ruggiano made an awkward slide, missing homeplate at first as he slid to avoid Avila's tag, but he clearly got his foot in and touched home plate before being tagged. While home plate umpire John Tumpane initially called Ruggiano out, Joe Maddon challenged the play and the call was overruled as the video replays were clearly indisputable. The Rays later scored the go-ahead run in the eighth inning on a sacrifice fly by Ruggiano, making him the Rays' MVP for the game. "Tonight's one of those days I'm really glad we have instant replay in the game finally," said Tumpane after the game, "I'd absolutely hate to have taken any attention away from the great action on the field tonight with a bad call -- those pitchers deserved to have their performances talked about, not me. Instant replay has helped me do my job better, and for that, I'm thankful."

Here's the play in case you've missed it. Joe Madden gets a little pissed off, "You're f#cking wrong!"

Ever wonder what all the x-ray talk is referring to? Then read this (Collateral Damage: The Lowdown on Diagnostic Imaging - Baseball Prospectus):

There are many different diagnostic tests used in sports medicine, and you hear them mentioned all the time in injury reports. X-rays were negative for a fracture, but the CT scan showed a tiny one. An MRI revealed a possible stress fracture, but then a bone scan was ordered.

I might buy this one (A look at the inner workings of ESPN - The Hardball Times):

While some stories deal with sex, the book doesn’t focus on the more salacious details of ESPN. Yeah, it tells a few sex stories and there is talk of bad behavior, but those stories generally appear to discuss an overall theme of ESPN culture rather than tell them for their own sake. For example, the book notes problems the company has had over the years, especially in the 1980s, with sexual harassment. Miller/Shales are more interested in the business aspects of ESPN.

Ideally, a bat would be made so the grain runs perfectly straight along the length of the bat. But if it's off by more than three degrees from parallel, the bat can lose about 20 percent of its strength and Kretschmann found himself examining bats that were off by 10 degrees or more.

So in the unlikely event that the Rangers do stumble, it's likely that only the Angels or the Mariners will be in any sort of position to take advantage. Which makes their three-game series that starts Monday night in Seattle at least somewhat important, right? Which got me to wondering which of them is, leaving aside this particular series, more likely to play well from this point through the end of the season, and perhaps take advantage if the Rangers should fall prey to injuries, bad luck, or the terrible ravages of hoof-in-mouth disease. 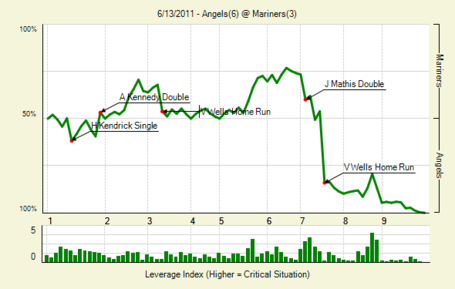 June 14 - BR Bullpen
Events, births and deaths that occurred on June 14.
1969 - Reggie Jackson of the Oakland Athletics collects ten RBI with two home runs, one double and two singles against the Boston Red Sox at Fenway Park. In the eighth inning, Jackson drives in three runs with a single when he easily could have made second base. Oakland wins, 21 - 7.
1974 - At Anaheim Stadium, Nolan Ryan strikes out 19 Boston Red Sox batters in 13 innings, including Cecil Cooper six consecutive times, to help the California Angels to a 4 - 3 victory in 15 innings. Barry Raziano is the winner in two innings of relief and Luis Tiant takes the loss in 14 1/3 innings, after Denny Doyle doubles home Mickey Rivers with the winning run.
1996 - Cal Ripken, Jr. sets a new consecutive games record by playing in his 2,216th consecutive game. The previous mark of 2,215 was held by Hiroshima Carp third baseman Sachio Kinugasa while playing in the Japanese Central League.
2010 - The game between the Blue Jays and the Padres in Petco Park is interrupted in the 8th inning by an earthquake that registers 5.9 on the Richter scale. However, as there is no damage, the game resumes after a very brief interruption, with Toronto winning, 6 - 3, behind two homers by John Buck and 3 RBI by Aaron Hill.
Happy b-day:
1926 - Don Newcombe, pitcher; All-Star