Share All sharing options for: Moves Made By Tony Reagins, Happy Birthday Wally and Joe.  Halolinks.

Although I hate click-through posts, and the OC Registers seems to love them, these two by Sam Miller are pretty excellent:

Is Angels’ GM Reagins good at his job? Best Deals - The Orange County Register
No. 1: Trades Joe Saunders, prospects for Dan Haren and his spectacularly team-friendly contract. Once a week, Tony Reagins calls the Diamondbacks. He asks to talk to the General Manager, Jerry Dipoto. "Jerry's gone," they tell him. "He was only an interim." Tony asks if they know where he is now? Tony says he's got some more stuff he wants to trade him. "Sorry, Tony. Jerry's not a GM anymore. Maybe you can talk to some other GMs?" Tony gets sad.

Is Angels' GM Reagins good at his job? Worst Deals - The Orange County Register
No. 5: Offered Jeff Mathis arbitration after 2010. There's a story, almost certainly apocryphal, about the Giants' GM trading Kirt Manwaring. "Why'd you get rid of Manwaring?" a reporter asked him. The GM replied, "it was the only way to keep Dusty Baker from playing him."

And then there's this crappy one from our buddy Mark Whicker. Although the information is interesting, you'll have to wade through his need to talk down to you:

The Don't Go Bringing Your Scott Kazmir Junk Up In This Piece Edition - Over the Monster
As was mentioned here at OTM yesterday, the Angels released Scott Kazmir. Kazmir was a super great awesome amazing awesome super awesome pitcher, but the most important word there is "was." He isn't any of those superlatives anymore. In fact, he's pretty awful. So awful, in fact, that the Angels released him despite the fact that they're on the hook for about $10 million more in salary. Do you think the Angels are so stupid they'd flush $10 million down a hole? If you're answer contains the words "Vernon" and "Wells" then you may have a point, but the truth is if Kazmir could still pitch, if there was any minute (as in infinitesimal) shot he could still contribute anything at the major league level, he's still be wearing a Angels uniform. But he's not.

The Demise of Scott Kazmir - FanGraphs Baseball
The reasons behind Kazmir’s declining velocity are unclear, but there are some factors that stand out. First, Kazmir has dealt with injuries every year since 2008. While arm injuries forced him to miss the starts of the 2008, 2009 and 2010 seasons, he finally appeared healthy entering 2011. But one start — and 1.2 innings later — and Kazmir found himself on the DL, then off to the minors.

How about some videos:

Peguero picks up a unique two-run single - MLB.com
Carlos Peguero sends a two-run single off the second base bag, breaking the scoreless affair and giving the Mariners a 2-0 lead

Fan takes homer away from Waveland Ave. - MLB.com
6/15/11: A fan makes a tremendous catch thanks to his hat, grabbing a souvenir on a Reed Johnson home run

First clips of the "Moneyball" movie:

And some creepy bitch:

Herm Edwards blasts woman who stole baseball from little girl: ‘You can’t be the bully anymore’ - Off the Bench
The TV clip (below) includes brief commentary from DBacks announcers Daron Sutton and Mark Grace, who were audibly amazed at the woman’s greed. According to several message board posts written by people who say they were at the game, Sutton and Grace later both autographed another ball and gave it to the little girl.

Angels plan on heating up with the weather - angels.com
As frustrating and disappointing as the season's first 10 weeks have been, the Angels have to feel pretty good about where they are: within shouting distance of American League West-leading Texas. They could be buried, given their inability to play .500 baseball while struggling to generate offense and playing dismally at home. Underscoring their biggest issue -- hitting with runners in scoring position -- is their 4-9 record in extra innings. Featuring a clubhouse full of performers who have a history of warming up with the weather, the Angels feel they can put together a run and apply some heat on the defending division champion Rangers.

I had planned on writing an expanded commentary on this Lyle Spencer post, but decided I might be done beating the dead-horse. Anyway, in doing some research for the writeup I found that ALL players on average heat up with the weather. Over the past 5 years, players typically post their best numbers in July and August. 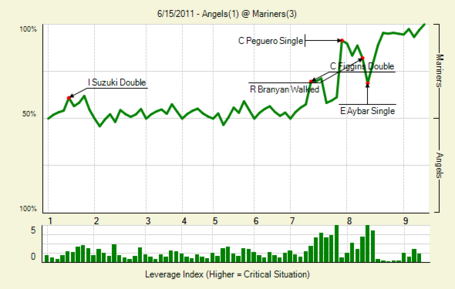 The Deserving All-Stars: AL Edition - FanGraphs Baseball
Starting Pitcher: Dan Haren, Jered Weaver, Felix Hernandez, CC Sabathia, David Price, Justin Verlander, Josh Beckett, Alexi Ogando I don’t know that there’s a credible case to exclude any of the first seven, who are all among the game’s premier starting pitchers, but there are a lot of guys who could make a strong case for that final spot. I went with Ogando over other deserving picks including James Shields, Michael Pineda, and Justin Masterson. Sorry guys – only so many spots, and way too many good arms in the AL this year.

AL West: room at the inn - The Hardball Times
Compared to the A's and Mariners, the Angels look like an offensive force. Compared to the rest of professional baseball, they are not. As with the previous two teams, they rank in the bottom third of the AL in homers and runs. The Angels hit for average, but don't have much power, and Vernon Wells continues to make Angels management look like lunatics for taking on his contract. His season line of .192/.235/.329 was actually boosted a couple of days ago by a two-homer game. All three of these teams have bright spots at the top of their pitching staffs. It is their inability to hit that leaves them with little chance of overtaking the Texas Rangers. If it makes them feel any better, Houston wouldn't be able to, either.

Report: Einhorn has $1 clause to buy Mets - FOX Sports
Hedge fund honcho David Einhorn could gain control of the struggling New York Mets in three years' time for just $1, under an option in his agreement with team's ownership to buy a minority stake, according to a Forbes report.