Double Plays Are Bad, So Is Frank McCourt. Halolinks

Share All sharing options for: Double Plays Are Bad, So Is Frank McCourt.  Halolinks

These are the things that make me scratch my head - Offense can't find clutch hit -- or avoiding hitting into DPs -  CBSSports.com

The Angels hit into three double plays in the game, running their season total to 74 in 74 games. That leads the American League and ranks second in the majors behind the Cardinals (80). And it's a number that manager Mike Scioscia finds a little difficult to explain. "Really with our team speed, if we're putting guys in motion, we should be able to minimize that," Scioscia said. "It's a sample size we hope will correct itself as we move forward in the season. "I don't think that's as big a concern. I think we're all more concerned with strikeouts and hitting with runners in scoring position."

It's an obvious fact that the Angels are having a hard time getting hits with runners in scoring position, but the good news is they're getting guys on base.  Sure they're leading the league in hitting into double plays, but you have to recognize that in order to hit into a DP you have to have a runner on base i the first place.  The thing that makes me go "Humm" is that Scioscia is concerned about the strikeouts.  In my mind, strikeouts aren't a big deal.  The chances of scoring from first with no outs is 40%.  The batter strikes out, the scoring rate drops to 27%.  However, if the batter hits into a double play, the scoring rate is now 7%.  In other words, with a runner on first and no outs, there's a 20% greater chance the team will score if the batter strikes out instead of hitting a ground ball.  (This data is a few years old, but I doubt much has changed)

Scioscia started catcher Jeff Mathis for the third time in four games, a day after Mathis hit his first home run since opening day. Scioscia said he hopes the frequency might "get him into a bit of a rhythm and he can start to contribute on the offensive side, too."

Mathis is currently hitting .191.  In over 1200 plate appearances in his 7-year career, Mathis' batting average is .198.  Rhythm's not the problem big guy.  He's doing what he's always done.

"I'm usually good in those (runners-in-scoring-position) situations but this year has been difficult," said Hunter (the Angels went 1 for 11 with RISP. "But I come through every once in a while."

Indians manager Manny Acta named Bruce Fields the Tribe's new hitting coach prior to Sunday's game against the Pirates. Fields replaced Jon Nunnally in the role, who was fired after an awful stretch of offense from the Indians. They have been shut out four times in June and seven times in their last 30 games.

Although the Angels have only been shutout twice in June compared to the four times for the Indians, the Indians have outscored the Angels 65-47 in the month.  In the last 30 days?  The Indians have scored 105 runs, the Angels 102.  I'm not advocating firing Mickey Hatcher, I'm just saying the Indians weren't the worst scoring team in the league.

Picciolo and McKeon go way back to 1977, when Picciolo made his Major League debut as an infielder for the Oakland A's under McKeon's stewardship. Thirteen years later, it was McKeon again, in San Diego, who gave Picciolo his first big league coaching job. When Greg Riddoch was elevated to the Padres' managerial post by McKeon, who became the general manager, Picciolo was promoted from his roving infield instructor role to San Diego's first-base coach.

The Rangers have made a donation to the fund supporting Taylor’s rehab, and they invited him on the field along with their other Georgia-based draft picks prior to Saturday’s game against the Braves in Atlanta.  Once Taylor completes school, the hope is that he’ll become a part of the Rangers organization in some capacity.

Orange County is my home, so it kills me that my hometown baseball team — the Angels — pretends to be in Los Angeles when it is not. Even worse is when the franchise admits to its own fans the stupidity of its name. Case in point, this email I just received from the Angels: 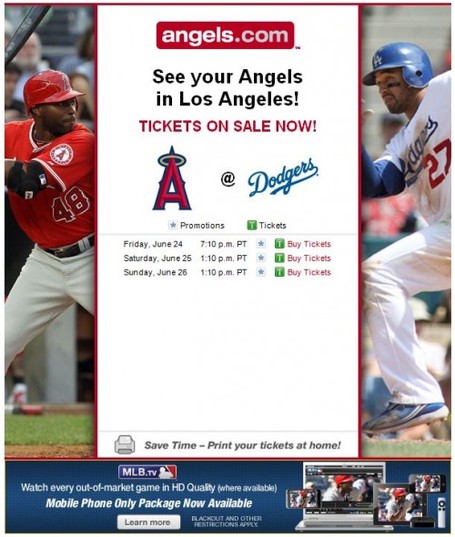 "See your Angels in Los Angeles" the email goes, to let me know that the Angels will actually be playing against the real Los Angeles team, the Los Angeles Dodgers.

The franchise moves that almost happened - The Hardball Times

The city of Los Angeles began to court the Senators. The fastest-growing city in the country was going to be a Senators city. The West Coast would go crazy for them. And the courtship continued during the 1956 World Series in Brooklyn. However, when Walter O’Malley got wind that Los Angeles officials were in town, he let them know that his Dodgers would consider Los Angeles as an option in case their stadium proposal fell through.

And now, Selig vs McCourt:

"Mr. McCourt has been provided with an expansive analysis of my reasons for rejecting this proposed transaction. Critically, the transaction is structured to facilitate the further diversion of Dodgers assets for the personal needs of Mr. McCourt.

Frank McCourt Must Go (UPDATED) - It's About The Money

In a statement released Monday afternoon, Selig said of his decision, "We owe it to the legion of loyal Dodger fans to ensure that this club is being operated properly now and will be guided appropriately in the future. This transaction would not accomplish those goals."