Your links...without commentary or opinion:

The Forgotten Ace - FanGraphs Baseball
Despite being an extremely durable and valuable pitcher over his career, Haren doesn’t seem to get the credit he deserves. Over the past five seasons, Haren ranks as the third best pitcher in all of baseball according to WAR (behind Halladay and Sabathia). Over the past six seasons, Haren has thrown at least 216 innings each year. While his strikeout numbers have been above average, Haren’s true value lies in his ability to limit walks (career 1.96 BB/9). Even though he clearly deserves to be mentioned as one of the best pitchers in baseball, Dan Haren seems to be the forgotten ace. How can a pitcher who has performed so well receive so little recognition?

Dan Haren's Cutter - MLB Baseball Analytics
The big difference between Dan Haren with the Diamondbacks in 2010 and his time with the Angels since then lies in the effectiveness of his cut fastball. While in Arizona last season, batters hit .308/.344/.513 against his cutter. Since moving to the Angles, those cutter numbers dropped to .228/.271/.305. What changed?

Vin Scully, the greatest baseball announcer of all time has not called a World Series Game on Television since Game 5 of the 1988 World Series when his Dodgers defeated the Mighty A's. As his career comes closer to an end, I feel that this great man and broadcaster needs to have one more chance to shine when the stage shines the brightest, The World Series. Join me in this push to have him get one more chance to crown a World Champion in the way it should always be done, with class, diginity and honor, the way he has done it for over 60 years.

Jered Weaver of Nightmares - MLB Baseball Analytics
When he delivers the ball to that bottom third, he is almost unhittable holding batters to a .147 average and a .176 slugging percentage. Righties have barely hit him here, held to a .105 pace and slugged just .123. Lefties are only better in comparison at .177/.215.

What do Matt Kemp and Jered Weaver have in common with Hall of Famers Lou Gehrig and Carl Hubbell? - Harvard College Sports Analysis Collective
Both Kemp and Weaver are the odds on favorites for their leagues’ MVP and Cy Young awards, respectively, and though their teams are having disappointing seasons, the historic nature of this weekend’s matchup cannot be understated. The list of same city tandems with WAR’s above 8.0 – 8 and above is deemed MVP-worthy – is a short one (see below) made even shorter still when constrained to be both a pitcher and a batter. In fact, since Ted Williams and Warren Spahn ruled Boston in 1947, it’s only happened once, with Dwight Gooden and Rickey Henderson dominating the league in 1985.

Angels' Jered Weaver could be close to All-Star start - USATODAY.com
Weaver's 2.01 earned run average is better than any of the other nine-game winners. In fact, Verlander's 2.40 is the only other one under 3.oo. The only better ERA in the league is Josh Beckett's 1.86 and the Red Sox starter's current illness could cost him consideration for the All-Star start.

Vin Scully Jokes About Jack McKeon's Lack of Twitter Knowledge (Video) - Larry Brown Sports
Morrison wrote on twitter "McKeon asked me what I had going on tonite. Told him I was going home 2 play w/ Twitter. He replied "oh, what kind of dog is it?"

Most 6+ and 3+ WAR Seasons, Retired Non-Hall of Famers - Beyond the Box Score
On the 6+ WAR list, we not only see Jimmy Wynn and Ron Santo placing well among the eligible players, but Jim Edmonds and Nomar Garciaparra looking very impressive among those not eligible yet. 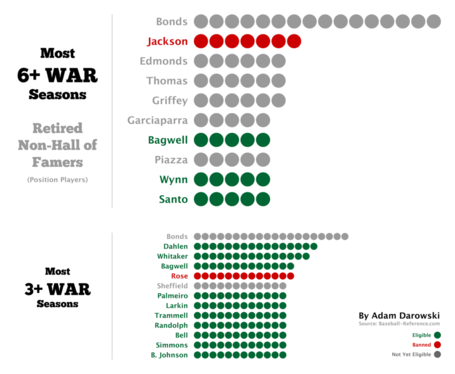 Rangers fans to try for sunglasses record - texasrangers.com
The Rangers will attempt to set a world record for the "most people wearing sunglasses in the dark" on Tuesday to celebrate the first day of summer. Reliant Energy will be providing 30,000 pairs of sunglasses to fans. The fans will be asked to wear sunglasses at the end of the sixth inning for 10 minutes. An official adjudicator from Guinness World Records will be on site to immediately confirm the successful attempt. 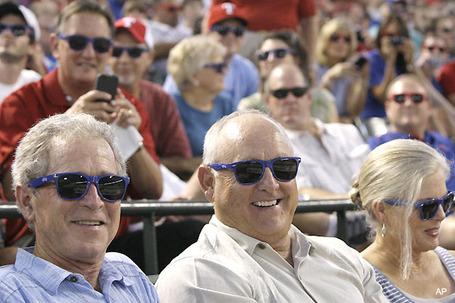 Frank McCourt's lawyer: Don't force us to sue - latimes.com
Bob Sacks, the attorney, also said McCourt would not surrender control of Dodger Stadium, the surrounding land and some ticket revenues even if he loses ownership of the Dodgers. Sacks said the entities controlling those interests are separate from the Dodgers and would remain under McCourt's control, which would require any new owner to pay tens of millions in revenue each year to McCourt. "There is the possibility of some fairly acrimonious and extreme litigation going forward, which Frank is hopeful will not occur," Sacks said. "If baseball were to act precipitously against Frank, which has been threatened, then there will be a showdown on that issue."

Craig Calcaterra has the appropriate response:

Frank McCourt: Shameless - HardballTalk
"Acrimonious and extreme litigation." It’s a phrase so ridiculous, oblivious, irresponsible and frankly obnoxious in this context that I don’t even have the stomach to make the easy jokes at Mr. Sacks’ expense. As a lawyer I’m disgusted by this kind of threat, as it casts what, on some level, I still consider my profession in the worst light, justifying the low esteem in which so many people hold the practice of law. As a baseball fan I’m disgusted by Frank McCourt’s entire operation and everything he’s done to this point, and my disgust grows by the day. Here’s a man who bought this once proud franchise on the back of $421 million of debt and managed to turn it into something even less than the funny paper he threw at it. He carved it up, mortgaged it to the gills, looted whatever he could loot and shifted around whatever he couldn’t. He lived a billionaire’s lifestyle on millionaire money that wasn’t even his to begin with and since it became abundantly clear that such a state of affairs was unsustainable, he has borrowed more and cast about madly to salvage whatever he can. At least as long as he hasn’t had to make any sacrifices himself, anyway.

Mark Cuban says team might be too much of 'a mess' for him to consider purchase - latimes.com
But, he said, "if the deal is right and they're fixable, then, yeah, I'm very interested." Told that he could become a hero in the Los Angeles the way he became one in Dallas, Cuban replied, "The opportunity is not lost on me."

The reality of a trip to Dodger Stadium is surreal - latimes.com
"Be serious!" I told him.
"Two dollars and fifty five cents!" he shouted again.
I questioned him further. He wasn't kidding. He had found three Dodgers tickets on the StubHub resale website for $2.55 each. The typeface was small. The message was giant. Admission to one of baseball's most venerable stadiums for a game involving one of baseball's most enduring franchises was being sold for the price of a pack of hair clips.I didn't think it was real. Even when my son had clicked the mouse and the printer had spit out three tickets for less than $20 including fees, I still didn't think it was real.Turns out, the $2.55 ticket was the only real part of a surreal afternoon in Frank McCourt's Ghost Town.

Who gets the bigger contract, Albert Pujols or Prince Fielder? - USATODAY.com
For the first 11 years of his career, Pujols has been one of the greatest hitters ever, winning three MVP awards and a World Series. But contracts, especially large ones like Pujols and Fielder will be seeking, must be given based on future performance. There may be concerns about Fielder's body type -- that being big at 5-11, 275 pounds -- but he has now proven to be more durable than Pujols, is four years younger and could be still improving while Pujols plateaus.

More Wily Mo - baseballmusings.com
After hitting 21 home runs in 63 minor league games, the Arizona brought up Wily Mo Pena for the first time since 2008. He did not disappoint as he homered in the Diamondbacks 7-2 win over the Royals. Chris Young added his 15th long ball of the season, and Joe Saunders pitched seven strong innings. With the Giants losing 8-0 early in their game, Arizona could be in first place come Wednesday morning.

A Few Thoughts on BABIP - FanGraphs Baseball
Last week, Ervin Santana was trying to hold on to a 1-0 lead in Seattle. With two outs and the bases loaded, he got Carlos Peguero to hit a weak ground ball up the middle. Erick Aybar was in perfect position to pick up the ball and throw Peguero out to end the inning, but on it’s way to his glove, the ball hit the base and bounced into left field. There’s no other way to describe that play than luck (good or bad, depending on your perspective). The pitcher got weak contact hit directly at a fielder, but because the ball bounced just so and deflected off an object embedded in the ground, it ended up as a two-run single.

Chuck Klosterman on Rock VORP - Grantland
There's still a lot of greatness to be achieved. We're still struggling with cold fusion and time travel. It seems like our ACLs are constantly tearing. Cats remain undomesticated. Many of the existential paradoxes originally raised by Gallagher continue to haunt us (parking on driveways, driving on parkways, etc.). To truly live, man must forever joust against himself. He must wage war against his own sexy demons. And I think we'd all agree that one of these demons looms larger than all others combined — we still haven't figured out a way to arbitrarily turn art into math. Well, that is about to change. 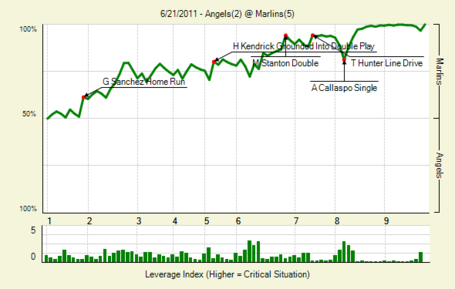