Angels' Bats Coming Around, Now and In The Future. Halolinks

Share All sharing options for: Angels' Bats Coming Around, Now and In The Future.  Halolinks

The loud return of Peter Bourjos' bat - ESPN Los Angeles
But working with Angels hitting coach Mickey Hatcher -- the bullseye for so many Angels' fans ire these days -- Bourjos pinpointed a flaw in his swing a couple of weeks ago. An upper cut had wormed its way into his swing plane and that's the last thing a player with his speed wants. Since that day, Bourjos is batting .444 in 10 games

Angels' top draft pick C.J. Cron displays power - latimes.com
After agreeing to terms with the Angels on a $1.467-million bonus, first-round pick C.J. Cron showed his power potential Monday, launching a number of balls well beyond the fence in Angel Stadium, including one that cleared both bullpens in left field.

Quick! Someone sign this guy to a contract...finally someone who can throw strikes! 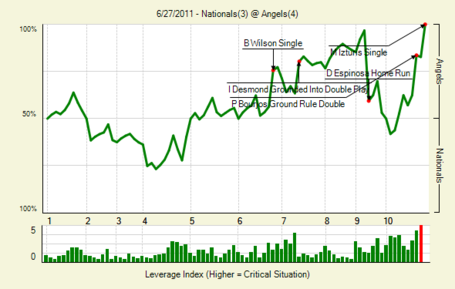 Video shows Stow in argument at Dodger Stadium - CBSSports.com
TMZ.com has posted video of Giants fan Bryan Stow getting into an argument with a Dodgers fan before his attack at Dodger Stadium, later identified as Juan Banda. The video shows a Dodgers fan pointing his finger into Stow's face, and Stow throws up his arms as if he doesn't want any more of the argument when the Dodger fan walks away.

Leyland goes off on umpire for botched call - CBSSports.com
But Leyland finally got the thumb when he decided to re-enact Rapuano's initial, delayed safe call followed by calling Dirks out. And Leyland was only getting started, continuing to holler for a few minutes and giving Marquez a piece of his mind.

Anyone think Scioscia should've acted like this on Sunday? Okay, maybe not like this, but at least kick some dirt.

Mathis, Bourjos revisit close call at home - angels.com
"No point in worrying about it now," Mathis said, shrugging. "I thought 'E' did a great job with his foot blocking Gordon, but they thought he was safe. That's over. Time to move on."