Share All sharing options for: C.J. CRON is Angels First Round Pick

These aren't Eddie Bane's Angels any more. Scouting Director Ric Wilson picked a college bat with projectable power instead of gambling on toolsy upsided high schoolers. With the 17th pick in the first round of the 2011 draft, the Los Angeles Angels of Anaheim took C.J. Cron with the pick they earned with their 80 - 82 record in 2010.

This pick is an indicator of waning faith in Kendrys Morales by the Angels as Cron is a slugging monster 1B whose stint in college at Utah puts him close to the bigs.

Mark Trumbo could be the placeholder due to injury, but K-Mo might be destined to be the asterisk in club history with the Halos drafting a college player in the first round for the first time since they took Jered Weaver out of Cal State Long Beach in 2004.

CJ Cron was born January 5, 1990. He has a twitter account as well! He is one year and eight months OLDER than Mike Trout, drafted two years ago this week. He is 6'4" and had an OPS over 1.300 ... those are big numbers among slap-happy Angels single hitters.

In this screen shot below from the live webcast of hs draft party, CJ CRON can be seen sporting an Angels cap less than an hour after he was selected with their 17th pick in the first round... 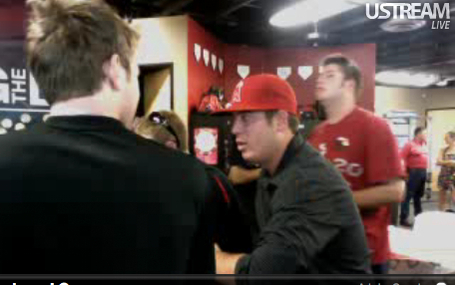 This is a draft with an eye on the future, as a college arm might have been able to help the Angels down the stretch this seasons alá Chris Sale with the White Sox last year. His MLB.COM DRAFT HIGHLIGHT VIDEO calls him a Right-Handed version of Sean Casey with more power. His cousin is former big leaguer Chad Moeller.