The Angels Need To Get Bad, Drafting College Players. HALOLINKS.

Share All sharing options for: The Angels Need To Get Bad, Drafting College Players.  HALOLINKS.

There's two sides to the team chemistry argument. One side says a team can't win without good clubhouse, while another says winning creates good clubhouse chemistry. I couldn't care less if the players like each other or not, but wouldn't be cool to at least have a guy in the clubhouse who isn't afraid to do the crazy shit? Throw crap on the field when he gets ripped off by the umpire, tell a reporter to stop asking such stupid questions, tell Peter Bourjos to stop swinging for the fences and just make some contact. The Angels need a bad guy.

They've got Torii Hunter's smiling face all over the place, but they don't have the flip-side to the happiest guy on earth. I'm not talking about the thuggery of an Oakland Raiders team, or the douchebaggery like this guy (Bryce Harper Homered, Admired His Feat, Then Blew a Kiss to the Pitcher [Video] - The Big Lead). I'm pretty sure you've heard about this clown, but just in case you haven't, there's this:

I'm talking about a guy who every other player is afraid of, a guy who'll charge the mound if the pitch is justthisclose to any part of his body. Heck, a player who'll be on top of another player if someone on his team gets thrown at.

With the guys this team has now, a scan of the clubhouse in Anaheim probably looks more like the locker room at Hollywood Park. None of the infield jockeys are bad-ass enough to pull this off. Vernon Wells is too glad to be mad. I like Hank Conger too much to want to hate him. Mark Trumbo looks like he's about to cry at any minute. Jeff Mathis? Maybe if this were NASCAR.

That only leaves Russell Branyan, and he makes perfect sense since he's probably won't be here too much longer. Branyan is the designated asshole. Go for it, punk.

Angels pick Utah first baseman - ESPN Los Angeles
The Angels used their top draft pick on a college player for the first time since they took Jered Weaver out of Long Beach State seven years ago.

Hey did you hear? There's this draft thing going on!

Angels raid colleges for talent - ESPN Los Angeles
New Angels scouting director Ric Wilson said Monday he was "very on board with what we've done in the past." Oh really? The Angels used their first 10 draft picks and 23 of their first 29 on college players. That seems like a radical departure from the ways of former scouting director Eddie Bane, who preferred higher-risk, higher-ceiling high school kids.

College? High school? I'm just happy they drafted guys who play BASEBALL. But seriously, I like the college picks mainly because they're less risky and easier to project. Besides, it's not like the club has had much recent luck developing the high-ceiling high school players (except for that Trout kid).

Here's the quote from the Halos Heaven community Vernon Wells:

"Guys are getting frustrated, and rightfully so. It's about keeping the focus on getting better moving forward. ... Even though it's frustrating, guys are still battling." 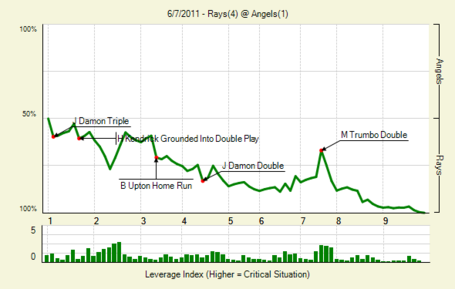 And speaking of FanGraphs...

A Proposal to Fix the Super Two Issue - FanGraphs Baseball
Major League Baseball should be incentivizing their teams to put the most entertaining products on the field. By creating a salary structure that makes it a wise choice to keep Major League-quality players in the minors, the league is actively promoting a lesser product to their respective fans.

Dave Cameron proposes an interesting idea about the "Super-2" players. I've heard the current arbitration process was going to be looked at during the new collective bargaining talks, mainly to eliminate the super-2 category.

Agents says Ramirez wants to stay in Chicago - CBSSports.com
Ramirez's agent, Paul Kinzer, told the Chicago Tribune that his client doesn't want to be traded and is unlikely to OK a trade if the team asked. Ramirez has a full no-trade clause and is also a 10-and-5 player, meaning he must OK any trade because of his 10 years of Major League service time, inclujding the last five with the same team. "He doesn't event want to take a trade. He took less years and less money to stay in Chicago [in 2006], so that is definitely his first option," Kinzer told the paper.

Probably just a bargaining position, but this is the one guy I thought the Angels were going to go get this season. Makes perfect sense...downside of his career, makes a ton of cash, and fills a hole in the Angels roster. Wait, fills a hole? Nevermind. Won't happen.

Rangers interested in Coffey, could deal Borbon - CBSSports.com
In Ken Rosenthal's latest column for Fox Sports, he writes about the trade market as it relates to the Rangers, saying the team could deal Julio Borbon, Taylor Teagarden or Chris Davis. Texas has been hunting for relievers, and Nationals righty Todd Coffey (pictured) has grabbed its attention.

But look who's looking to deal and improve themselves. Dicks.

Final trade rumor link. I think the Halos have just the guy the Giants are looking for...

Sanchez goes five-and-dive, Giants looking harder for catching help, etc. - Extra Baggs
It’s not looking so great. Whiteside hasn’t gotten much zip on throws to second base. He’s allowed a few pitches to clank off his glove. He is a very good backup catcher, but I’m getting indications (from a few folks, too) that the Giants are ramping up their pursuit of another catcher. Maybe even two.

And no, I don't mean Hank Conger, but watch TR deal Conger for Barry Zito.

Thanks to Commander Nate for this link. I know Darvish won't be in any draft, but who doesn't think he'd be the number one pick if he were?
Nippon Ham Fighters: Yu Darvish making it look easy - Yakyu Baka
Can a pitcher be any more dominant than Yu Darvish right now? Darvish tossed his third straight complete game shutout victory tonight, tying a PL record that has been accomplished 8 times by 7 other pitchers (including Orix's Chihiro Kaneko last year). He also hasn't allowed a run in 44 consecutive inning

This is the coolest thing I've seen in a long time. You have to check out this interactive graph: In Preparation for the 2011 MLB Draft - a Visual Historical Look - Beyond the Box Score

The Nickname you Never Heard : baseballmusings.com
I noticed the Yankees took Dante Bichette, Jr. in the draft, the 51st pick over all. Chris Berman had a nickname for the draftee’s dad that he could never use on the air, Dante "

Sorry, you'll have to click the link to find out the awesome nickname.

Not a gimmick: Padres draft great-nephew of Eddie Gaedel - Yahoo! Sports
Valparaiso outfielder and new MLB draft pick Kyle Gaedele says he is proud of the major league bloodline that runs through his family — no matter how short it is. Gaedele, whom the San Diego Padres picked in the sixth round of the draft on Tuesday afternoon, is a great-nephew of 3-foot-7 Eddie Gaedel, the shortest (and lightest) player in major league history and star of its greatest stunt.

2011: The year that evil became stupid? - The Hardball Times
It’s one of the most frustrating aspects of fandom, the knowledge that teams use your interest to rip you off. Five years ago, this was brought to my attention dramatically when an attempt to buy a $17 ticket to Wrigley Field cost me $25. No, I didn’t go through Stub-Hub or any ticket broker. I bought directly from the Cubs—it’s just that they’re "convenience charges" and "processing fees" mean it cost $8 for the right to pay for a $17 ticket. And the Cubs are hardly alone in this matter. Every team has them, some more than others.

It's all about the greenbacks.

If there's anyone in the MLB organization who has at least half a brain, they'll hire the marketing group behind these commercials. These are exactly what MLB needs to market themselves, witty, funny, on-topic, entertaining promotional spots to show potential fans that baseball is fun:

June 8 - BR Bullpen
Events, births and deaths that occurred on June 8.
1955 - The Los Angeles Dodgers option left-handed pitcher Tommy Lasorda to the Montreal Royals to make room on their roster for "bonus baby" Sandy Koufax, who had been on the disabled list.
1965 - Arizona State star sophomore Rick Monday, selected by the Kansas City Athletics, is the first player chosen in the initial major league free-agent draft of high school, college, and sandlot players. Picking second, the Mets take pitcher Les Rohr. In the tenth round, they finally take Nolan Ryan. Cincinnati picks Johnny Bench in the second round.
1977 - Nolan Ryan notches his fourth career 19-strikeout game, pitching the first 10 innings of a game against Toronto.
Happy b-day:
1925 - Eddie Gaedel, pinch hitter (d. 1961) Weren't we just talking about him??