Share All sharing options for: They're No Angels: Missionary Church Masters Stadium Panhandling

Angel Stadium of Anaheim has been infested with a group of pregame panhandlers who appear to be affiliated with a religious service organization, but a little online research about their organization reveals its questionable credentials and even murkier use of donated monies.

Their white suits bear patches that read "Missionary Church of the Disciples of Jesus Christ" and they have small badges affixed to their lapels that identify them as affiliated with a registered religious organization that qualifies as a non-profit organization. 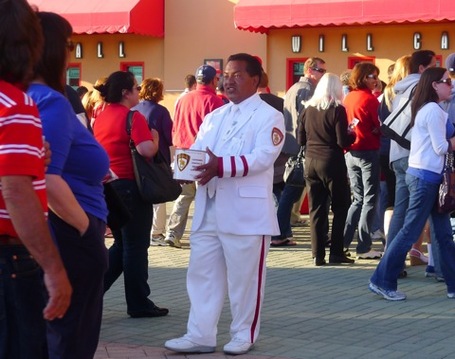 As baseball fans walk to the stadium gates, these church members wave large donation cans emblazoned with claims of a "Food for Life" program. No evidence of any dietary limits can be seen on the piggishly overweight panhandling members of this sect, all wearing XL and XXL suits and hoisting converted Folgers coffee cans, Big Lebowski style, before games. 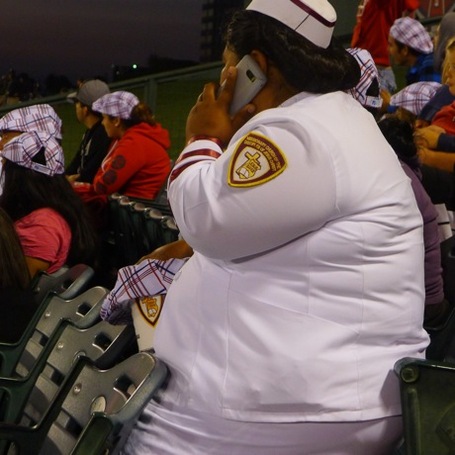 Their white ensembles make them stick out and might even be mistaken for the wardrobe of a mainstream organization with a public accounting of their donations. The Salvation Army is the epitome of a faith-based charity with many established centers delivering help and services to the needy. Many published reports all agree that the Missionary Church of the Disciples of Jesus Christ is about as opposite of the Salvation Army as possible, except for their costumes. Other than these slick street whites, this group is not at all transparent, does not have any record nationally explaining how its funds are used, has no record of giving grants to local food banks and whose entire track record as a religion seems to be confined to doing the necessary legal paperwork and then mimicking a religion in all the methods open to bodies of worship to fund their operations but absolutely none of the operations to do any helping, preaching or even basic worshipping. 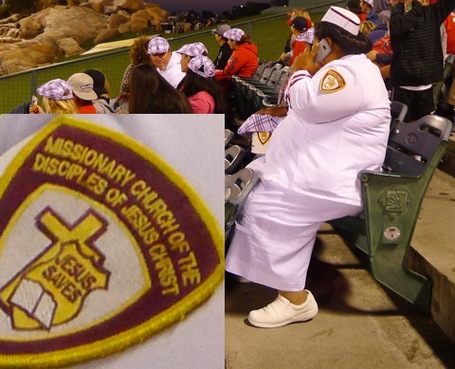 Why are they out in front of Angel Stadium of Anaheim before Angels home games? They seem to be emboldened by reported litigation from Wal-Mart over soliciting donations an are treading on the stadium ground as the literal "legal gray area" between public space and private property. I was worried Angels owner Arte Moreno had joined this nefarious cult, and while I wish Angel General Manager Tony Reagins and catcher Jeff Mathis would run off to one of their many national satellites (usually underclass hotels on the bad side of medium sized towns).

Even though dropping in a few pennies to these parasites has the same effect as the team paying Vernon Wells his salary, the very fact that this group hustles dough on our stadium ground should anger religious people as well as atheists, property rights advocates as well as free speech enthusiasts. When this sect publicly masquerades as an actual religion, all religious groups are debased as charades. When public property is allowed to be overrun by charlatans who only know how to fill out state registration paperwork and wear hand-me-down high school band uniforms, legitimate causes that might actually be in the public interest are watered-down in their effectiveness with hosting special donation campaigns when the ridiculous sight of these "apostles" has made us all jaded to the non-profit sector. 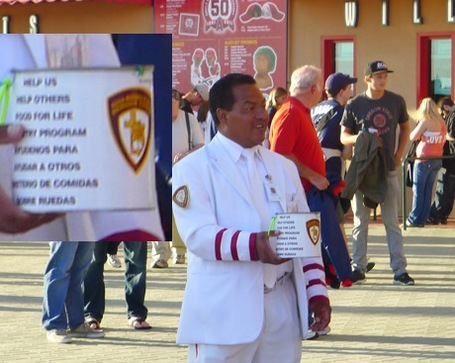 Here is THE LINK TO THE HOMEPAGE of their website

It was "fully launched" on April 27, 2009 yet has many non-working links that might give us more answers about what the group does. It lists its worldwide headquarters address in Covina as well as a phone and fax number, but there is almost no meat on that bone. Again - it looks like a religion, it has the paperwork of a religion, but numerous investigative reports over the years indicate that it does not operate at all like a religion once it has collected donations.

Here are some of the headlines they have been grabbing:

Google their name and do your own research. If you are an Anaheim resident, how do you like other service organizations being put at risk by charlatans in costumes?