Share All sharing options for: Hall of Fame For Autry, Kendrick is All-Star Birthday Boy.  Halolinks

Autry to be inducted into Angels Hall of Fame - angels.com
The late Gene Autry will be inducted into the Angels Hall of Fame prior to the game against Texas on July 19 at Angel Stadium. Autry, who passed away in 1998, was the original owner of the club from its first season in 1961 through 1997. Taking part in the pre-game ceremony will be former Angels Nolan Ryan, Rod Carew, Brian Downing, Bobby Grich, Chuck Finley, and Jackie Autry, Gene's widow.

This is really surprising to me. Not that the Angels are inducting Autry, but that it took this long to do it. I thought he was already in their hall of fame. I mean, come on, they retired the number 26 in his honor, what took them so long to put him into a team's hall of fame considering without him there wouldn't be a team?

Dick Williams’ career highlights - The Hardball Times
April 27, 1975. In the sixth inning, after the Angels have taken a 9-1 lead, Oakland relief pitcher Jim Todd beans California’s Bruce Bochte. Williams is so outraged that, after checking to make sure Bochte isn’t in critical condition, he charges the mound himself, sparking a bench-clearing brawl between his old and current teams.

I remember thinking that when the Angels brought in Williams they were for sure heading to the World Series. That didn't happen, but he provided some legitimacy to a club who up until that time were looked at as perennial losers. 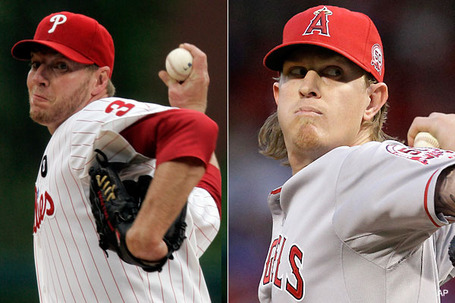 Walden all smiles as a rookie All-Star - CBSSports.com
Jordan Walden entered Angels spring training this season as a 23-year-old reliever looking to nail down a roster spot. Low and behold, he was sitting at media day Monday as an American League All-Star, courtesy of his 20 saves, high strikeout rate and 2.84 ERA.

Jordan Walden in shock, while Howard Kendrick playing it cool at All-Star Game - angels.com
"You know I'd never call myself a leader," said Kendrick, the Angels' leading hitter at .302 with a .462 slugging mark and .360 on-base percentage. "But I'm having more guys come up and ask me questions than I have before. "I can tell them I've been there in certain situations. I had disappointments, got sent down to the Minors in '09. You have to learn to trust yourself and your talents. That's what all these young guys are doing now.

Today is Kendrick's 28th birthday. How cool must it be to be playing in the all-star game on your birthday?

Angels will have to go through Boras to re-sign Weaver - The Orange County Register
"All I know is from my first conversation with Arte after the Angels drafted Jered there was not an agreement on what we saw Jered being. They did not see Jered emerging as one of the pre-eminent pitchers in the league as we did. "Now, I think the Angels and us are both on the same page as far as recognizing his status in the game and what he means to this franchise. When both sides are on the same page, it certainly makes it more likely you can come to an agreement."

I think this is going to be an ugly negotiation. If the Angels play their "Here's our offer, you have 20 minutes to decide" game, Boras will walk, taking Weaver with him.

Do the Angels really need someone like Bell? I think it'd make more sense to beef up the offense, not bring in a reliever who could potentially cost them in terms of depth. If they want to improve their bullpen, a much cheaper option would probably be enough.

The 2011 All-Flub Team - FanGraphs Baseball
There are many different ways to choose who’s been "the worst" player at each position — just like there are multiple ways of choosing the best player — but for the sake of simplicity, I used Wins Above Replacement (WAR) to compile this list. I didn’t simply choose the player with the lowest WAR at a position, though; I gave preference to players that had more playing time, and I chose to put less weight on defensive performance.

Anyone what to guess who the starting catcher is? Anyone? Come on, take a guess. Yeah, that guy.

Autograph madness for Angels Scioscia, Trumbo - The Orange County Register
About a half dozen autograph seekers arrived before 4 a.m., six hours before Angels manager Mike Scioscia and slugging rookie first baseman Mark Trumbo were to begin an autograph session at Howard's appliance superstore in The Market Place in Irvine.

Fan May Owe Taxes For Claiming Jeter’s 3,000th Hit - NYTimes.com
"There’s different ways the I.R.S. could try to characterize a ball caught by a fan in the stands," said Andrew D. Appleby, a tax associate at the Sutherland Asbill & Brennan law firm in New York who has written about the tax implications of souvenir baseballs. "But when the Yankees give him all those things, it’s much more clear-cut that he owes taxes on what they give him."

Idiot nearly falls from the stands chasing a ball at the Home Run Derby - HardballTalk
He was spared serious injury or death only because his friends grabbed him by his feet, held him and then pulled him back as he dangled over the railing above a concrete deck 20 feet below.

Yeah, idiot is the right word. Actually, it might not be strong enough. Here are some more pictures: PhotoBlog - Daring fan attempts catch at MLB home run derby

Death at the Ballpark: The national pastime's shocking death toll. - By Jon Mooallem - Slate Magazine
Death at the Ballpark: A Comprehensive Study of Game-Related Fatalities, 1862-2007 is an impeccably sourced compendium of the men, women, and children who have died or been fatally injured while playing, officiating, or watching baseball in the United States.

July 12 - BR Bullpen
Events, births and deaths that occurred on July 12.
1921 - Babe Ruth hits his 137th career home run, passing 19th century star Roger Connor's record of 136.
1979 - After a delay of an hour and 16 minutes, the White Sox are forced to forfeit the second game of twi-night doubleheader against the Tigers when over 5,000 fans refuse to leave the field during Disco Demolition Night. Mike Veeck's promotion involves admitting fans for 98 cents with a disco record, collecting the vinyl and then literally blowing up the LPs and .45s in center field.
Happy b-day:
1983 - Howie Kendrick, infielder; All-Star