In a rare scheduled Saturday Doubleheader of Doubleday's perfect pastime, the Angels showed up for a half-day and took the opener against the Oakland A's 4 to 3, only to fall asleep and waste away the backend tussle 3 to 4 in extras.

You know you are squandering your God-given talent and promise as a baseball player when you are getting pummeled by this pitiful crew of Green and Gold. Which, considering their 21 hits versus our 20 strikeouts on the day, is pretty much what is happening.

The opening set of frames we saw Jered Weaver reach his 12th win of the 2011 campaign and creeping up his ERA slightly, leaving him 3/100's of a percentage point of the best in all of Major League Baseball. Yeah. Like that is some sort of fail. We closed the pitching with our usual dose of Scott Downs/Jordan Walden, leaving us to worry about how the second game should be finished. Unfortunately, we would remain awake long enough to later find out. Meanwhile, the offense was all A-Ball all over the A's, with the main production coming from Erick Aybar, Bobby Abreu, and Alberto Callaspo. The Aybrar/Abreu/Alberto triumvirate was a combined 5 for 12 with 3 walks, 3 hits, 1 homer and 2 runs scored. In order to rest up for the back end of the day's festivities, Howie Kendrick, Jeff Mathis, Mark Trumbo and Mike Trout pretty much took the game off.

In the second set of frames Santana got off to a rousing start, holding the A's to but 2 hits and carrying a 2-run lead thanks to a Trumbo homer (I told you he took the early game off for a reason!) into the 4th. Oops. 6 hits, a wild pitch by Santana and an error by Conger and the next thing you know, we got a tie game 2-2.

Cart, say goodby to Wheels. The next frame sees an Ervin error leading to a go-ahead run. Torii Hunter continued his most miserable day (0 for 8 with a daily golden sombrero of 3 strikeouts). Vernon Wells continues his hot hitting off of righties and found the second deck of left field with a tying HR. But Ervin then tries his best to hand back the lead in the 7th, getting yanked just in the nick of time for Hisanori Takahashi

Cart, say hello once again to Wheels. Hisanori then pulled Ervin's ass out of the fire with a blazing 7th and 8th AND 9th!! This was the most dominating performance by an Angels pitcher since, well, about 3 hours earlier from Jered Weaver. Which leads us to - SURPRISE! - yet another game of extras, and on a day of extras!!

But the Halo offense had, by this time, grown rather weary. No more runs for us, pleeez. Worst of all, the plate ump decided that this was enough baseball for one day, and that it was time to go home. So he collapsed the strike zone on Thomson as much as necessary to gift the win to the A's in the 10th.

Don't believe me? Looksee for thyself: 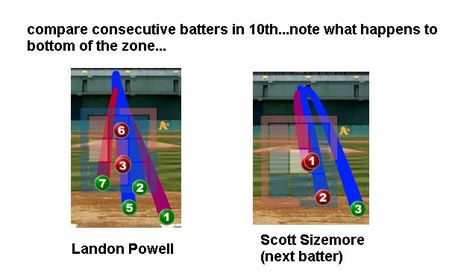