Angels broadcaster's daughter is typical teen, and it's extraordinary - latimes.com
"The school has been great, but it's been hard on her. She could read a whole book, have a seizure and not remember the next day she had read the book. And the seizures could come anywhere, in a restaurant, the dentist's office, in class.… "She would have to take a nap after a seizure and would usually wake up and say, 'What happened, Daddy? Did I make any noise?' She was so embarrassed when she would be in class and have an outburst and start making noises. I would always tell her, 'No, honey, no noises.' "

Best wishes to Ashley Gubicza and the entire "Gooby" family.

Rangers' Josh Hamilton can't get tragedy out of his mind - latimes.com
"You can't help but think about it sometimes," Hamilton said before Tuesday's game against the Angels at Angel Stadium. That day, during a game against Oakland, 39-year-old Shannon Stone, a firefighter and father, fell to his death after reaching over the railing to try to catch a ball Hamilton threw into the stands.

How would you handle a situation like this?  Would you feel responsible?

"It was a little hard to swallow. But looking at the big picture, I need to go down there and work on some things."

Here's what Conger was saying after being run-through the Halos Heaven translator: ""It was a little hard to swallow being sent down when the worst hitter in baseball continues to get playing time. But looking at the big picture, I need to go down there and wait for the organization to finally realize how bad Jeff Mathis is, which is unlikely to happen.  While I'm there I'll continue to advance my game and work on some things so I can have a great major league career for whichever team the Angels trade me to."

Q&A: Chili Davis - FanGraphs Baseball
Whether he’s offering a strong opinion or he’s waxing philosophical, Chili Davis is always engaging. The former slugger can hold court on any number of subjects — he was born in Jamaica and coached in Australia — but when the topic is his 19-year big-league career (1981 to 1999), thought-provoking pearls are a given. That is especially true when a conversation about hitting morphs into an examination of doctored baseballs — Nolan Ryan cheated? — and bias in hall-of-fame and MVP voting.

Cool interview with one of my all-time favorite Angels. 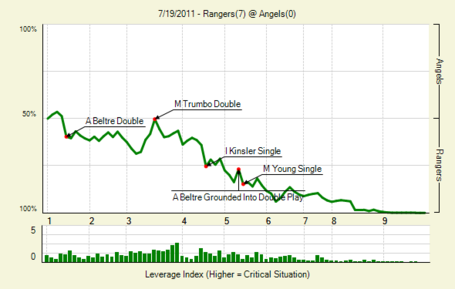 I sure hope this chart isn't representative of the Angels season.  Trumbo's double being the pre-all-star break success, only to be followed by a slow decent into non-contention.

Halos throw out Chavez to avoid double steal -  MLB.com
Erick Aybar throws to the plate to cut down Endy Chavez attempting to swipe home on a double steal in the fourth

Callaspo starts the rundown to nab Andrus -  MLB.com
Alberto Callaspo snags the grounder and makes a heads-up toss to Jeff Mathis to catch Elvis Andrus in a rundown for the out.

Did anyone else think that once Andrus avoided Mathis by laying down, that Mathis was going to fall flat on his face and let Andrus score?

Rangers throw out Aybar stretching a double -MLB.com
Endy Chavez gets the ball back into the infield and Elvis Andrus makes a great throw to nab Erick Aybar digging for a triple.

U mad bro?: Young Giants fan pouts big time over foul ball -  Yahoo! Sports
If a picture is worth 1,000 words, the screen cap of this young boy's death glare at Tuesday's San Francisco Giants game has to be worth at least 10 times that, right?  Here's the video: Pouting kid gets second chance at foul ball -  SFGiants.com

Tigers’ Victor Martinez creates new way to slide into home -  Yahoo! Sports
Right fielder David DeJesus(notes) threw home and Suzuki caught the ball on the first base side. He whirled around to make the tag, but Martinez stepped (danced?) around him, then dove back toward the plate to score Detroit's first run of the game. Watch the play here:  V-Mart overruns plate, reaches in to score -  MLB.com

Fan makes grab on foul, hands ball to kid -  MLB.com
A fan makes a nice grab on a foul ball, then hands the ball to a kid in the stands

Dodgers bankruptcy: What is Wednesday's hearing about? - latimes.com
The question that will be determined is whose $150 million should be used to run the Dodgers while the team is in bankruptcy. McCourt arranged for a loan from a hedge fund; Selig prefers that Major League Baseball fund the loan.

The Financial Fall of Lenny Dykstra - NYTimes.com
"We had him on the payroll for $1 million a year," said Kevin Dykstra, Lenny’s younger brother, who managed a string of car-wash and quick lube centers in the Los Angeles area for him. "He was enjoying his retirement from baseball, playing a little golf. But then Lenny had to go do what he did."

Thanks to Hardball Talk for the tip

Thome's aim at 600 deserves more attention - CBSSports.com
When he hits No. 600, he'll join just seven others in that much more exclusive club: Barry Bonds, Hank Aaron, Babe Ruth, Willie Mays, Ken Griffey Jr, Alex Rodriguez and Sammy Sosa. Now, here's how special Thome is. He played during the stained "steroid era" with Bonds, Sosa, A-Rod and Griffey. Griffey and Thome have never been accused of using anything by a credible source nor tested positive. Bonds, Sosa and A-Rod have. It should make us appreciate this impending feat that much more.

Two Trade Rumors Destined to be True - FanGraphs Baseball
Sure, Sean O’Sullivan is not a great pitcher, but that doesn’t mean that the Angels have an infinite number of mediocre prospects to keeping sending to the Royals for their mediocre players that provide a mediocre upgrade over their in-house options at best.

10 things I didn’t know about Bert Blyleven - The Hardball TImes
He’s going in. This weekend the Hall of Fame will have its annual induction ceremony, and sabermetric darling Bert Blyleven will finally get his well-earned plaque put on display. In honor of Blyleven, I’d like to rip off the column format pioneered here at THT by Bossman Studes, who used to run a regular "Ten things I didn’t know last week" feature. These aren’t items I learned in the last week, but they are things I found out during the course of Blyleven’s seemingly never-ending Cooperstown candidacy.

Curtis Granderson: Where are all the black fans? - USATODAY.com
Baseball appears to lack appeal and access to some blacks, whether they are participants or fans. And Granderson wasn't necessarily trying to stir the pot when he told the Fort Worth Star-Telegram: "Count the number of African-American fans." On a recent trip to Texas, Granderson said it was difficult to push the count to double digits. "At first, it starts off as a joke (with teammates)," Granderson said. "As the game moves on, you'll get to 10, or maybe 15. Depends on where you are, too. Places like Chicago or New York, other places it's easy. (In Texas), it's hard. So after a while it becomes, 'Told you so.' "

Dodgers' Hiroki Kuroda clears air about trade speculation - latimes.com
He said he didn't know what to make of his situation. "I have very complicated feelings. I can't read the newspapers, so I don't really know what's happening," said Kuroda, who doesn't speak English. This is a new experience for Kuroda. In his first three seasons in the major leagues, the Dodgers were buyers and not sellers. He spent his previous 11 seasons in Japan, where in-season trades are rare.

Perusing one run games - The Hardball TImes
Pythagoras was meant to translate a team's run differential into a win percentage figure. It works. But what about using it for components in a team's record? It doesn't make much sense to use Pythagoras, for instance, when figuring out an expected record in one-run games. Because of the straight linearity, shouldn't the expected record be what it is? The run differential can only go up or down by one per game; same with the team's record in those situations.